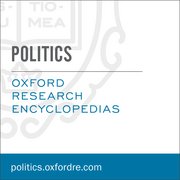 Substantive, peer-reviewed, and regularly updated, the Oxford Research Encyclopedia of Politics combines the speed and flexibility of digital with the rigorous standards of academic publishing.

One of the many controversies that emerged in regards to fair voting in the 2016 US Presidential campaign revolved around rules in some states which required voters to choose their party primary far in advance of the actual primary election. Complaints about these rules arose in both major parties, with supporters of two insurgent candidates (Bernie Sanders and Donald Trump) claiming that rules were rigged in favor of party “establishment” candidates.

A year later, these issues from spring 2016 may seem like minor – even quaint – electoral issues in light of other accusations about improprieties in the 2016 election, including President Trump’s accusations of voter fraud, and Congressional inquiries into Russian election interference. Yet the issues are worth revisiting, not least because they are likely to spark intra-party controversied in coming years as party factions strive to gain the upper hand for subsequent primary elections. Beyond the struggle for power, the question of principle is: who should be entitled to make the parties’ most important decisions?

Whether or not the parties’ 2016 presidential primary rules should be regarded as “rigged” – a term which suggests something improper – they certainly differed among states. Within a few states, they also differed by party. Half the states had completely open primaries for at least one party (in most cases, for both major parties), which meant that registered voters could decide on Election Day whether to participate in the Democratic or Republican primary.

The remaining states differed in terms of how far in advance voters were required to make this decision between parties. The minimum waiting period was one day prior to the primary (New Hampshire),while other states imposed much longer wait periods for those changing party affiliation; in some states this category included those changing from “independent” to partisan. In Rhode Island, voters needed to register a changed affiliation at least 90 days prior to the primary; in Kentucky, they needed to do it by December 31 of the previous year (for a March 4 primary); and in New York, they needed to complete this 30 days ahead of the preceding general election (roughly six months ahead of the state’s 2016 primary). In other words, in states with the longest waiting periods, voters needed to establish their eligibility to participate in a specific party’s primary long before it was clear how either party’s contest would shape up.

Importantly, many states with waiting periods for changing party registration imposed much shorter or no waits for those who were not previously affiliated with a party. This differential treatment makes clear why some state parties have considered it both legitimate and important to impose probationary periods for primary participation: to prevent loyalists of a different party from mischievously crossing-over so that their non-preferred party selects a weaker candidate, or in some other way “insincerely” influencing the electoral outcome.

We are likely to see more disputes about these rules in the coming years. These intra-party battles may not be front page news, but they are likely to be highly consequential in determining who gets nominated, and perhaps who ultimately ends up in office.

Such cross-over voting is at odds with the idea that a party’s candidates should be selected by its supporters, those who want the party to win and have its best interests at heart. Requiring pre-registration is one way to verify that voters have a pre-considered interest in a particular party. Thus, proponents of advanced primary registration rules might argue that they were functioning as intended in the New York state primary when they excluded new-found partisan supporters of Bernie Sanders (who was elected to the US Senate as an Independent), and of Donald Trump (who was a registered Democrat from 2001 to 2009).

Conversely, opponents of these rules would probably reject the idea of parties as having interests of their own; under the latter logic, candidate nomination should be done by the entire electorate. While both sides in these debates can frame their arguments in terms of democratic values, these disputes center on clashing views of whether political parties have either organizational or programmatic value, or whether they are no more than labels of convenience.

The United States is not the only place where political activists and parties are debating who should participate in party nominating processes. Most strikingly, parties in many parliamentary democracies are confronting such questions as they experiment with different ways to select their candidates and leaders.  Whereas such parties used to reserve such decisions for party members or for intra-party congresses or committees, an increasing number are now opening these processes to registered supporters (non-members). For instance, in 2016 the Canadian Liberal Party changed its rules to allow registered non-members to participate in party decisions such as intra-party ballots to select parliamentary candidates. Registration is free, and can be done online.

Ahead of the French presidential election of 2017, both the Socialist Party and the center-right coalition held primary elections which were open not just to party members, but to all who registered as supporters and paid a small fee (€1-2). The British Labour Party held leadership elections in 2016 and 2017, both of which were marked by debates about who should be eligible to participate, how far in advance supporters or members needed to sign up, and whether different registration waiting periods should apply to those who had recently been members or candidates of different parties.

We are likely to see more disputes about these rules in the coming years. These intra-party battles may not be front page news, but they are likely to be highly consequential in determining who gets nominated, and perhaps who ultimately ends up in office.

Susan Scarrow is John and Rebecca Moores Professor of Political Science at the University of Houston. She is co-editor of the forthcoming book Organizing Political Parties: Representation, Participation, and Power (Oxford University Press 2017). She is also the author of “The Changing Nature of Political Party Membership” for the Oxford Research Encyclopedia of Politics.