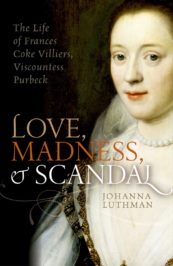 At the Tudor and early Stuart royal courts, the careers of influential politicians and courtiers often depended on the preferences of the monarchs: being in the king’s good graces often mattered as much or more for advancements than ability and training. The personality and quirks of the rulers affected many aspects of a courtier’s life, including what today might be considered the most private: their sex lives. When King James I died in 1625, ambitious persons jostling for positions in the formation of Charles’s court would soon learn that the son had different tastes from the father, and expected different behaviors from those around him. While James mostly ignored or tacitly accepted the philandering of his courtiers as long as they kept up a modicum of discretion, Charles was not so forgiving. Under his reign, courtiers soon learned that they had to “keep their virginities,” or “at least lose them not avowedly,” as one courtier wryly remarked. If Charles found out, offenders could face serious consequences.

Sex outside of marriage constituted a criminal offense during the early Stuart period. Crimes like adultery and fornication were punishable by both secular and ecclesiastical courts. Adulterers could be imprisoned, whipped, put in the stocks, fined, and forced to do public penance. The nobility tended to be largely shielded from the strong arm of the law of church and state: it was rare that members of the elite were legally charged with sexual offenses. That did not mean that they could not face consequences for their actions: men and women serving at the royal courts were instead punished directly by the monarch.

Coming to England after the austere period of the ageing and ill Queen Elizabeth, Scottish King James and his queen introduced a rather boisterous courtly culture. Their celebrations gave the court a reputation for debauchery, although historians have often overemphasized it in the past. James’ courtiers did not necessarily engage in more instances of illicit sex, but the king’s reaction to them certainly signaled a relaxing of the strictness and severity Elizabeth had enforced. Where Elizabeth had both imprisoned and exiled courtiers who engaged in illicit sex, James tended to look the other way, as long as those involved had not committed additional crimes. Men like William Herbert, Earl of Pembroke, experienced the differences first hand. In Elizabeth’s reign, Pembroke impregnated one of the Queen’s maids of honor and then refused to marry her. He was imprisoned for a time, and then exiled from court for the remainder of the reign. In James’s reign, Pembroke returned to court, and to royal favor. Although he had an affair with his first cousin, the writer Mary Wroth, and even had two children with her, he suffered no negative consequences at James’s court as a result.

King Charles, a highly principled and stubborn man, firmly believed that he, his family, and his court should serve as a model for his subjects, and reflect the benign –but absolute – rule of the patriarch and sovereign. Charles introduced a strict court protocol, limiting access only to those who had the proper credentials, and organizing his days in minute details. Passions, drunkenness, and sexual improprieties should be banished from an orderly court, in Charles’s view. Sir Henry Jermyn, Queen Henrietta Maria’s Vice Chamberlain, would learn the consequences of testing King Charles’s lack of understanding for sexual missteps. When Eleanor Villiers, a maid of honor, found herself pregnant, Charles set about to investigate what had happened. Eleanor told the king that Jermyn was the father of her unborn child. Jermyn admitted to the unlawful sexual relations, but, like Pembroke a generation earlier, refused to marry her. Also like Pembroke at the Elizabethan court, Jermyn found himself behind bars for several months. Then, he had to leave England altogether for two years, before Charles begrudgingly allowed him back, largely as a result of the queen’s lobbying for his cause. Eleanor had to leave court and never returned.

Interestingly, the king appears to have made an exception for his favorite, George Villiers, Duke of Buckingham, who had also been the last great favorite (and probably lover) of King James. Buckingham was a well-known womanizer, who even managed to convince Charles to appoint his mistress as a lady-in-waiting to the reluctant queen. Charles accepted Buckingham’s behavior mostly because he was the king’s closest friend and unshakeable ally. During the three years between his ascension to the throne and Buckingham’s assassination in 1628, Charles always stood by his friend, even at great political and financial cost.

Charles’s acceptance of Buckingham’s peccadilloes did not extend to the duke’s sister-in-law, Frances Coke Villiers. She was the wife of John Villiers, Viscount Purbeck, Buckingham’s elder brother. After her husband succumbed to mental illness, Lady Purbeck took a lover and gave birth to a son. The scandal broke at the very end of King James’s reign. While James, true to form, initially hesitated to punish Lady Purbeck, an outraged Buckingham insisted. The ill and dying James eventually acquiesced, and an investigation began. After James’s death, Buckingham, now aided by an equally outraged King Charles, worked to punish and shame his wayward sister-in-law. He would find it surprisingly difficult, as Lady Purbeck simply refused to accept her punishment. After Buckingham’s premature death, Charles continued to pursue her, and she continued to refuse to acquiesce. Charles was a stubborn man: once he had his mind set on a matter, he rarely changed it. He strongly disliked illicit sex, but he disliked challenges to his authority even more. The equally stubborn Lady Purbeck managed to do both, albeit at great cost.

Johanna Luthman is associate professor of history at the University of North Georgia. She focuses on the history of Tudor and Stuart England, and especially on issues of love, sex, and marriage. She is the author of Love, Madness, and Scandal: The Life Frances Coke Villiers, Viscountess Purbeck.