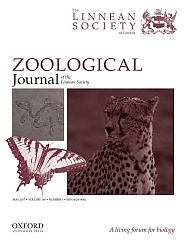 Zoological Journal of the Linnean Society

The Zoological Journal of the Linnean Society publishes papers on systematic and evolutionary zoology and comparative, functional and other studies where relevant to these areas. Studies of extinct as well  as living animals are included. It is one of three journals of the Linnean Society of London, the world's oldest active biological society.

Stoic, scaled, and spiny, with a distinct air of prehistory, the marine iguana (Amblyrhynchus cristatus) makes a formidable impression on all that visit the Galápagos archipelago. Early visitors found them almost demonic, Hollywood turned them into monsters and even the father of evolution was repelled. In his diary of the Beagle voyage, Darwin refers to them as a “hideous-looking creature”, whilst describing his experimental attempts to drown them, and recalling that their meat is quite good for those “whose stomachs rise above all prejudices”. Yet despite their brutish appearance, marine iguanas are extremely placid herbivores, posing a threat only to the algae upon which they feed. We now know that these creatures represent one of the oldest living lineages of the archipelago and as such, their evolution is deeply intertwined with the history of the islands themselves, a discovery foreshadowed by Darwin‘s observation that “They assuredly well become the land they inhabit”. By studying the marine iguana we may therefore illuminate the processes of diversification and selection that drive the generation of species there.

The Galápagos archipelago is a highly dynamic and complex habitat, with islands continuously forming, moving, and finally submerging below the sea. The evolution of its native organisms can be equally complex, and this is certainly the case with the marine iguana. Recent genetic work has revealed that the single marine iguana species is made up of a network of distinct populations across the archipelago, with most islands harboring its own genetic unit. However, these units do not match up with the seven subspecies that were formally described. The old marine iguana taxonomy, based entirely on the morphology of relatively few animals, was in clear need of a reevaluation. Having an accurate taxonomy is vital, because taxonomy describes the biological entities that we use to conceptualize biodiversity, and crucially to legislate for and protect. When these taxa don’t represent biologically meaningful units, what are we actually protecting?

A new study ‒ employing a combination of traditional and modern approaches ‒ has addressed this issue. Using genetic data from almost 1,500 individuals, and morphological data from over 150, the study outlines a new integrative taxonomy of 11 subspecies that accurately reflects the natural divisions within the marine iguana species. Why, you might wonder, do we speak of subspecies rather than species? Whilst the divergence between these units is obvious, the pattern is neither deep enough nor clear enough to warrant full species designation. But actually, the far more interesting question is: why isn’t this divergence deeper?

The Galápagos is famous for its speciation events. On this archipelago, multiple distinct forms of finches and tortoises inspired the thinking that revolutionized our understanding of the natural world. Why then, would one of the oldest and mostly widely distributed lineages of the archipelago steadfastly refuse to speciate? Again, genetic data can shed some light. Recent work explored the question of interbreeding between iguanas of different island populations. In doing so, it found that though they are relatively rare, migrant iguanas experience rather high mating success on other islands, a fact illustrated by the numerous inter-island hybrids found. As conservationists, we may be concerned about this – hybridization homogenizes biodiversity and it is considered one source of extinction.

But hybridization can also produce more subtle effects. On the Galápagos, we find several examples where hybridization results in ‘lineage fusion’. This is where organisms from distinct lineages interbreed, thereby fusing lineages and reversing the formation of species. When this process is caused by human activity, e.g. by artificially moving organisms, we are right to be concerned. Yet in some cases, this fusion is undoubtedly a natural process, and it may even be vital in supporting long-term survival in a changing world.

In Darwin’s finches, hybridization is creating individuals whose novel genetic combination gives them a significant advantage in the face of a deadly introduced parasite. A species might be lost this way, but increased hybrid fitness means that some variant of the finch should persist. In marine iguanas, hybridization may be augmenting the genetic diversity of local populations, thereby enhancing their ability to rapidly adapt and survive the swift environmental changes brought about by El Niño events, where population crashes of up to 90% occur. Whilst hybridization has likely prevented the marine iguana from radiating into multiple fully-formed species, it could also underlie its ability to persist in this dynamic environment for millions of years. These events reminds us that lineages and even species can be transient entities, that one branch of the evolutionary tree may well be absorbed into another, often leaving no trace. Yet these ‘lost lineages’ are still important, since they generate genetic variation, which is the raw material of evolution. As such, protection of not only species, but also subspecies and other units of evolutionary significance against man-made threats is important. For the marine iguana, the new taxonomy will allow this, and should help ensure the persistence of this fascinating creature well into the foreseeable future.

Amy MacLeod is a Zoologist who specialises in the evolution and conservation of reptiles. Her PhD from the TU Braunschweig focussed on the Galápagos marine iguana. She is a co-author of "Shedding light on the Imps of Darkness: an integrative taxonomic revision of the Galápagos marine iguanas (genus Amblyrhynchus)", recently published in the Zoological Journal of the Linnean Society.