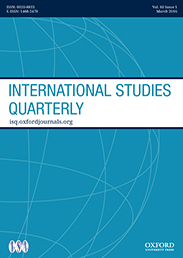 ISQ is ISA’s flagship journal. It seeks to publish leading scholarship that engages with significant theoretical, empirical, and normative subjects in the field international studies.

Ever since the exposure of the covert Russian intervention in the 2016 US election, questions have arisen about the effects that foreign meddling of this type may have. Before these events transpired, I had begun studying the wider question, investigating whether partisan electoral interventions by the US and USSR/Russia usually affect the election results.

Although they usually get far less international attention and media coverage than various violent forms of meddling, partisan electoral interventions, or attempts by foreign powers to intervene in elections in other countries in order to help or hinder one of the candidates or parties, are actually quite common. In a dataset I constructed (called PEIG) the US and the USSR/Russia have intervened in this manner 117 times between 1946 and 2000–or, put another way, in about one of every nine competitive national level executive elections during this period. Both countries used a variety of methods for this purpose, including public threats or promises, the secret provision of money to the preferred party or candidate’s campaign, “dirty tricks” such as the release of true (or false) damaging information about the undesired side, or either an increase in foreign aid or other assistance before election day or a withdrawal this kind of aid. With this dataset in hand I can use statistical analysis in order to examine the usual effects of such interventions on the results of the affected elections.

For example, in the 2000 Yugoslav election, the US intervened for the main opposition presidential candidate, Vojislav Kostunica, against the incumbent, then-Yugoslav president Slobodan Milosevic. The US government utilized various methods for this purpose, such as publicly promising, a few days before the elections, to remove US sanctions on Yugoslavia if Milosevic lost power. I estimate that without the effect of this electoral intervention Milosevic would have probably have run neck-and-neck with Kostunica in the first round of the elections ( estimated at 43.4% to 46.5%). If the first round of the Yugoslav elections had concluded in this inconclusive manner rather than in an outright Kostunica victory (51.7%), Milosevic quite probably would have been able, as he had in the past, to “steal” the elections without bringing about the massive wave of demonstrations which eventually forced him to acknowledge his defeat and resign from the presidency. Many contemporaries would agree with this finding. For example, one of the main figures in the Kostunica campaign admitted in an interview shortly afterwards that, “The foreign support [to the campaign] was critical” to its electoral success.

Of course, given the average effects that have come from my research, electoral interventions will not always assure victory for the intervener’s preferred side. Likewise the actual effects of such meddling may vary in their magnitude from case to case. Nevertheless it’s clear that partisan electoral interventions are an important phenomenon which can frequently ‘matter.’ With competitive elections now a significant feature of domestic politics in more than half of the world’s states, interventions of the kind seen in the 2016 US elections are likely to become an even more common occurrence.

Dov H. Levin is a post-doctoral fellow in the Institute for Politics and Strategy at Carnegie-Mellon University. He received his Ph.D in Political Science from the University of California, Los Angeles. He is the author of the article 'When the Great Power Gets a Vote: The Effects of Great Power Electoral Interventions on Election Results.'