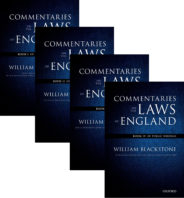 The Oxford Edition of Blackstone's: Commentaries on the Laws of England

What exactly is ‘scholarship’? According to a widely-used definition attributed to the OECD (Organisation for Economic Co-operation and Development), research is ‘creative work undertaken on a systematic basis in order to increase the stock of knowledge’. But there seems to be no OECD definition of ‘scholarship’. Wikipedia’s article under that heading is about scholarship(s) as ‘a form of financial aid’, with cross references to ‘The Scholar Ship’ (an early 21st-century international education programme conducted on a passenger liner), and a warning against potential confusion with either ‘Scholarism’ or ‘Scholasticism’.

In Australian and perhaps other academic parlance, ‘scholarship’ sometimes means intellectual work in the humanities and social sciences, as distinct from the natural sciences, pure and applied; this presumably reflects the OED’s definition of ‘scholar’ as ‘a learned person, esp. in language, literature, etc’. At my own university ‘research and scholarship’ was once a standard formula encompassing what all academics were supposed to do when neither teaching nor engaged in administration. In recent years, however, this use of the term ‘scholarship’ has ceased. We are all now ‘researchers’, even those who don’t frequent laboratories clad in white coats.

We are all now ‘researchers’, even those who don’t frequent laboratories clad in white coats.

This semantic shift might scarcely matter, if the OECD definition of research were more inclusive. But some additions to the existing body of knowledge are easier to demonstrate than others, especially those related to the natural world with which scientists deal, as distinct from the individual and social worlds of human beings studied by humanists and social sciences. Discovering a hitherto unknown organism or property of some compound fits the OECD bill much more readily than reinterpreting a work of art or literature or the causes of World War I.

That difference is reflected in bureaucratic conventions applied to the assessment of academic performance. Thus every named author of a multi-author paper published in a peer-reviewed scientific journal can expect some institutional recognition, usually in the form of brownie points counting towards tenure, promotion or eligibility for sabbatical leave — whatever the length of the paper or number of individuals contributing to its publication. No such credit is available for book reviews commissioned by the editors of scholarly journals in the humanities and social sciences.

The assumption may be that such reviews merely express a subjective opinion about the merits of the work reviewed, hence cannot constitute research, because not augmenting the sum of knowledge (regarded as comprising objective ‘facts’). This would ignore the likelihood of a reviewer’s critique revealing aspects of a monograph, or its subject area, not otherwise apparent to the book’s readers, or even its author. But then book reviewing is an uncommon activity for STEM-discipline practitioners, where the paper, not the monograph, is king, although it has long been a vital element of intellectual exchange across most of the humanities and social sciences.

Similar reluctance applies to scholarly contributions to works of reference. Yet while many encyclopaedic reference works, especially in the STEM subjects, purport to be no more than compilations of established knowledge, others—like the ODNB or Australian Dictionary of Biography—represent the fruits of original scholarship (or research, if you prefer). By the same token, editing either a text, or a published volume of essays, is an increasingly ‘pointless’ activity. Yet in the latter case recognizing an intellectual gap best filled by group effort, identifying and commissioning contributors and peer-reviewers, working with authors to ensure their pieces reach a minimum quality threshold and fit together in coherent fashion, so the eventual whole is greater than the sum of its parts—these are hardly mere mechanical processes, distinct from the knowledge-augmenting creativity of the genuine researcher.

Not necessarily imposed on the humanities and social sciences by a philistine managerial-scientist alliance, such discrimination may also be self-inflicted by rule-makers who find it politic to go with whatever they regard as the prevailing tide. But perhaps none of this matters very much in the greater scheme of things. Portents of the impending demise of scholarship—if that is what they are—might even be cheered in some quarters, as the triumph of useful innovation over irrelevant, self-indulgent antiquarianism. In any event, much scholarly activity is already supported by institutions and patrons other than universities, and universities are not all of a piece.

Yet in increasingly complex and uncertain times, the benefits of old knowledge, its preservation and re-assessment, should not be undervalued by default. Even the proto-modernist Jeremy Bentham (1748-1832) admitted the possibility that some acquaintance with past errors might help avoid their repetition in the future he and his followers sought to construct according to utilitarian principles. The tensions between Bentham’s single-minded philosophical radicalism and the gradualist, pragmatic, liberal-conservative William Blackstone (1723-1780), his Oxford lecturer and life-long bête noire, still resonate; their differences over history, law, politics, religion, and society continue to intrigue modern readers. The texts being edited by the Bentham project at University College London, and the new Oxford edition of Blackstone’s Commentaries, now provide unprecedented opportunities to explore these two seminally divergent ways of knowing and understanding their world, and our own.

Wilfrid Prest is Professor Emeritus of History and of Law at the University of Adelaide. He is the author of William Blackstone: Law and Letters in the Eighteenth Century (OUP 2008, 2012) and general editor of The Oxford Edition of Blackstone's Commentaries on the Laws of England (OUP, 2016).

Facing the challenges of serving the public as an academic