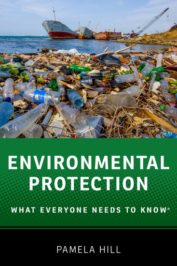 Environmental Protection: What Everyone Needs to Know®

Something unsettling has happened to environmental protection in the United States. It has lost its status as a value deep enough to power political consensus. Compare the early days of political action on the environment with today: in 1970, Richard Nixon—an astute politician, but not an environmentalist—said in his State of the Union Address:

“We still think of the air as free. But clean air is not free, and neither is clean water […] Through our years of past carelessness we incurred a debt to nature and now that debt is being called.”

That year he established the Environmental Protection Agency. In the same year, the Senate passed the monumental Clean Air Act by a vote of 73 to 0, and the country celebrated its first Earth Day.

Fast forward to 2017: with a few possible exceptions, Congress hasn’t addressed any significant environmental problems for over a quarter century and has blocked important environmental legislation; President Trump has promised to gut the EPA; and its new administrator, Scott Pruitt, as Attorney General of Oklahoma, sued the Agency over and over again to kill major environmental regulations.

At first blush, the political shift may seem baffling. For one thing, a majority of the American public identifies environmental protection as a societal value. For another, health statistics gathered over many years show that the improved air and water quality Americans now enjoy is a result of the environmental laws enacted in the 1970s. They are widely credited with greatly reducing asthma, drinking water contamination, and a host of other costly health consequences of a previously underregulated environment.

Why did this turnabout happen? Although there are many reasons, two stand out and they are ironic: first, the success of the environmental laws (a good thing), which enabled complacency; and second, on the subject of climate change—the single most important environmental threat of this century—the dogged insistence by the press on balanced reporting. This is also generally a good thing, except that it can create confusion in the public’s thinking and enable manipulation by parties benefitting economically when they are not required to limit the pollution causing rising global temperatures. Let’s unpack these.

“We still think of the air as free. But clean air is not free, and neither is clean water […] Through our years of past carelessness we incurred a debt to nature and now that debt is being called.”

Complacency: in 1969, Ohio’s Cuyahoga River caught fire because of all the garbage and industrial waste dumped into it. Los Angeles regularly had smog alerts as automobile exhaust sat in the city’s air basin. These and other obvious and alarming symptoms of pollution (with help from Rachel Carson’s Silent Spring a few years earlier) propelled the environmental movement and the bipartisan legislation that poured out of Congress in the 1970s. Not just the Clean Air Act, but also the Clean Water Act, the Safe Drinking Water Act, the Endangered Species Act, and other blockbuster laws were passed without serious congressional opposition. Their success was real. The Endangered Species Act brought back the bald eagle. The Clean Water Act made Boston Harbor clean enough to swim in again. The Safe Drinking Water Act made American public water supplies among the safest in the world. Having experienced few shocking environmental problems since the passage of these laws, Americans today by and large take the environment for granted. This has allowed politicians to hunker down on behalf of powerful corporate voices, rather than maintain legislative vigilance.

But this complacency ignores two facts. First, the environmental challenges we face today are largely imperceptible. We don’t fear them as we do a river on fire or air so dirty you can’t see the building across from your balcony. The greenhouse gases responsible for climate change are usually odorless, tasteless, and invisible. The same holds for nanopollutants in cosmetics and waste pharmaceuticals from medicine cabinets (or eliminated in our urine). Second, environmental protection is not a one-time job. It requires the oversight and monitoring of state and federal regulatory agencies, starting with the Environmental Protection Agency, and occasional intervention by Congress to meet new or newly discovered challenges. An example is hydrofracking, which was on no one’s radar in 1970. The environmental problems it can create, such as contamination of groundwater and drinking water, aren’t easily addressed in existing environmental laws. But efforts to amend the Safe Drinking Water Act for that purpose have been stymied in Congress by the petrochemical industry.

Balanced reporting: a hallmark of democracy is a free and probing press. But a responsible press also needs to protect the public from points of view that skew important issues, or worse, are designed to manipulate public opinion. Reporting on climate change has too often shirked this responsibility. There is near-universal agreement among the scientific community that climate change, caused largely by carbon dioxide emissions, is occurring and creating an existential threat to the planet. And yet the media often present contrary views by climate deniers and a tiny minority of scientists that leave readers and listeners with an inaccurate takeaway about the urgency of the problem. Politicians thus get cover for shying away from legislative fixes that might anger their corporate backers. And Administrator Pruitt is enabled to say about carbon dioxide, “I think that measuring with precision human activity on the climate is something very challenging to do, and there’s tremendous disagreement about the degree of impact, so no, I would not agree that it’s a primary contributor to the global warming that we see.”

Let’s hope it doesn’t take a full-blown catastrophe to cut through public complacency and provide the press with a disaster story so scientifically unambiguous that it can’t be denied, and Congress with a mandate it can’t dodge. But we shouldn’t need a 21st century version of a river on fire—a city under water?—to speak and act responsibly on behalf of the environment.