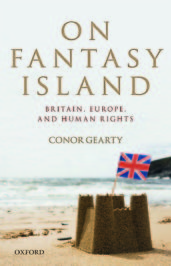 In this episode of the Oxford Law Vox podcast, human rights expert Conor Gearty talks to George Miller about human rights in the UK.

Together they discuss myths surrounding the Human Rights Act and its relationship with the European Court of Human Rights. The question of the potential implications of getting rid of, or replacing, the Act after the event of the UK leaving the EU through Brexit is also addressed. Conor particularly highlights how the Act impacts on society and who it affects, as well as the basic guarantees it gives that are available to us all.

Below are selected excerpts from their wide-ranging discussion, with access to the full conversation via the Oxford Law Vox.

Conor and George begin by discussing the Human Rights Act and how it is surrounded with apprehension and myth:

“Take one of the myths as an example of what I’m saying… the Prime Minister, as he then was, and the Home Secretary, as she now isn’t, Theresa May, [said] they were forced against their best interests and wishes to implement a dreadful court case on the Human Rights Act which put Britain at risk… Which was simply untrue… The Human Rights Act goes out of its way to say that the Strasbourg case law, that’s the case law in the European Court of Human Rights in Strasbourg, should not govern British law… Yet ministers, critics, sceptics, went on and on and on about how Strasbourg, the Strasbourg Court, now govern British law. [This is] simply not true from the point of view of the Human Rights Act.”

Conor also discusses the “assault” on the Human Rights Act from quite a number of sources, including people in the academic and judicial world, and politics, who have been in defence of common law:

“I think what’s happened shows how deep the battle over the soul of Britain is. I’m referring to Brexit… [The] position of nostalgic supremacism has gathered pace. What Brexit has, in my opinion, authorised is a return to previously unsayable interventions… a certain sense of social and economic rights being less important and a return to a more traditional approach, and I think that the Human Rights Act will be next in that particular cultural war… The level of connection between the assault on Europe (EU) and the assault on the European Convention of Human Rights (Human Rights Act) is integral.”.

Conor discusses the wider implications of the Human Rights Act and the influence it has on the UK’s changing culture:

“The Human Rights Act reached into a culture and strengthened directions within the culture… Take the present: I think what’s going on is a massive rollback from that. And what that entails is an attempt to reverse the culture so it becomes easier to use abusive terms about an immigrant… The Human Rights Act has become a hugely important symbol of resistance to the effort to reverse the culture.”

The podcast closes with Conor’s final comments on the British Bill of Rights and the potential consequences that may come from it:

“There would be a hierarchy of rights – the British Bill of Rights would come with marvellous rights for a British passport holder. The rest might not be tortured, but they’d have separate rights… The Human Rights Act would have to go to accommodate that because its rationale is the human not the location.”

To hear the full interview with Conor Gearty, and to listen to a bonus podcast about his career and background, visit the Oxford Law Vox on SoundCloud.

You can also learn more about Conor Gearty and On Fantasy Island in Conor’s video introduction to the book on YouTube.

Conor Gearty is Professor of Human Rights and Director of the Institute of Public Affairs, London School of Economics, and author of On Fantasy Island: Britain, Europe, and Human Rights (OUP, 2016).

Daisy Simonis is the Marketing Assistant for Academic Law at Oxford University Press.