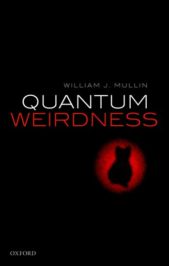 Quantum mechanics allows some mind-bending effects. A recent paper shows us how to make an image of the silhouette of a cat using a set of photons that had never interacted with the cat object. The photons that had actually interacted with the cutout, and carried information about it, had even been discarded. The explanation depends on the ideas of quantum superposition and interference; the trick is in transferring quantum information from one set of photons to another.

Let’s review superposition briefly: if a particle can take two possible paths α and β then the quantum wave function is a sum of the two states representing these paths. If we use a detector to measure which path the particle is traversing, we would find it is either the α path or the β path. A which-way measurement collapses the superposition into just one element. However, the superposition is not just an expression of the uncertainty of the path taken. The single particle must have taken both paths, because, if the two paths intersect, the two states will interfere with one another, causing “fringes,” that is, regions of increased or decreased probability, depending on the position of the interference.

Figure 1 shows the possible photon paths. The basic elements are two special crystals NL1 and NL2 (NL for “nonlinear”); when a laser pulse enters one of these it can produce a pair of photons, one called the “signal” photon and the other the “idler” photon. A laser pulse enters either of the green paths, a or b, producing a pair in NL1 or in NL2, but not two pairs. BS1 is a “beam splitter” that has equal probability of allowing the laser pulse through into a or reflecting it into b. Suppose mirror D1 were not present. Then we would have either set {c, d} or set {e, f} and the state of the system would be an entanglement (superposition of pairs) of these two possibilities, where c and e are the signal photons and d and f are the idlers.

The mirror D1 deflects the idler photon on path d where it interacts with the object O, which is a cut-out silhouette of a cat, with the photon either being transmitted or absorbed by the cut-out figure. That means the pair {c, d} now carries information about the cat in terms of a “transmission coefficient” T that measures the probability of the idler photon being transmitted through the silhouette.

What we want is to transfer this cat information to the signal photons in paths c and e, which we will allow to interfere when they meet at the beam splitter BS2. The key trick of the process is to turn this entanglement into a simpler superposition. To do this we divert idler d with mirror D2 so that it passes through NL2. At the dotted vertical line, we now have two possibilities, either we have signal c, but with idler now in state f, or we have laser pulse b having triggered NL2 so that the signal is e and the idler is again f. The state, ignoring any activity at position O, is then the simpler superposition in which the signal state is a superposition of c and e, with the state f a common factor of both. Now state c, which was associated with idler d carries the information about the cat. How this precisely happens is not so clear without the use of some quantum mathematics.

The interference of the signal photons c and e at BS2 is measured by the detectors at g and h. The probability of a photon being found in detector at g is increased by a term depending on T; the probability of the detector at h is decreased by the same amount in the other. These are the interference fringes. The detectors thus can now measure T; so one can see how the paths of repeated idler photons could be varied so they could detect different points in the cat’s silhouette and get the position of the outline of it, transferring this information in each case to the detected signal photons. The image as seen in Figure 2 is formed by detecting the signal photons, which never actually “saw” the cat.

Does this odd technique have any application? Perhaps. Suppose I want to investigate a very sensitive system, perhaps a biological molecule. My detectors work with photons of a frequency that would damage the molecule, so I use photons of a much lower energy and transfer the information to photons that work in the detectors. I make an image with photons that I cannot detect and detect photons with which I cannot make the image.

There have been other proposals to do so-called “interaction-free measurements” for example, by Elitzer and Vladman and by Kwiat et al among others. In these one can get information about a system, for example, its position, without actually sensing it directly. Quantum mechanics allows one to do these strange things.

William J. Mullin is Emeritus Professor of Physics at the University of Massachusetts Amherst. His areas of research are quantum fluids and low temperature physics. Recently his studies have focused on Bose-Einstein condensation and the fundamentals of quantum mechanics. His most recent book is Quantum Weirdness (OUP, 2017). The cat silhouette is the cover image of this book. An expanded mathematical version of this essay appears at his website.