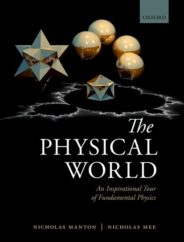 The Physical World: An Inspirational Tour of Fundamental Physics

Voltaire is known today for Candide, a short novel published in 1779. The young hero Candide travels the world in a tale littered with rape, murder, pestilence, enslavement, and natural catastrophe. Amidst this apocalyptic nightmare, Candide’s tutor Dr Pangloss maintains a philosophical detachment, arguing against all evidence to the contrary that we live in the best of all possible worlds. The purpose of this strange tale was to demolish a theological position held by the philosopher Leibniz caricatured as Dr Pangloss, and this objective was certainly achieved. So how did Leibniz come to be identified with such a world-view?

The story begins in antiquity with Hero of Alexandria, a brilliant engineer and mathematician in the days of the first Roman emperor Augustus. His works survive in scattered fragments that describe ingenious devices such as vending machines, wind-powered pipe-organs, and even a simple steam-powered gadget, the aeolipile, named after the Greek wind god Aeolus.

Hero also wrote the Catoptrica (theory of mirrors) in which he attempted to explain why light rays follow straight lines. He proposed that a light ray travelling between two points takes the path that minimizes the time taken, and noted that if light travels at a constant speed, then the quickest route is also the shortest route – a straight line. In other words, any other path that the light ray might have followed would have taken longer than the actual path. Hero showed that this optimization principle would also explain why the angle of incidence equals the angle of reflection when an image is reflected from a mirror.

In 1662, Pierre de Fermat extended Hero’s idea to explain refraction. When passing between different media, such as air and water, the path of a light ray bends at the interface between the media. According to Fermat, this is because light travels slower in water than in air, so the quickest route is not perfectly straight; it has a longer straight segment in the faster medium and a shorter straight segment in the slower medium. Fermat used this argument to derive Snell’s law and explain how lenses work. In Fermat’s day, the speed of light had not been determined in any medium so his proposal was rather speculative, but it proved to be correct.

Gottfried Wilhelm Leibniz is credited with being the first to realise the wider significance of optimization in physics. Although this approach to mechanics was not perfected until the 19th century, Leibniz’ account survives in a letter from 1707.

The motion of a body such as a cannonball, subject to known forces, may be calculated using Newton’s laws of motion. This is often expressed in terms of changes in its kinetic energy K and potential energy V, where its total energy is E = K + V. The key to the alternative optimization approach to mechanics is the Lagrangian, L = K – V, defined as the difference between the kinetic and potential energy. Integrating the Lagrangian over a path produces a quantity known as the action. When this is calculated for the path that a body follows through space, it is smaller than for any other path the body might have taken. This is the principle of least action. It means that the trajectory of a material body can be predicted by finding the path that minimizes its action (It is worth noting that in some circumstances a trajectory is determined by maximization of the action rather than minimization, and also that the optimization of the action is local and not necessarily absolute. In other words, the trajectory optimizes the action compared to neighbouring paths).

Newton’s laws of motion can be derived from the principle of least action, so the optimization approach is completely equivalent to Newtonian methods. But the principle of least action is more fundamental with much wider application. For instance, Maxwell’s equations for electric and magnetic fields can be derived from an action principle, and so can the Einstein equation, which describes gravity as curved space-time. Indeed, the action lies at the heart of theoretical physics. It is essential when formulating the incredibly successful modern theories of elementary particles, such as the Standard Model, and even the more speculative and esoteric theories of strings.

This raises the question of why such optimization principles should hold. How does a beam of light know which route is quickest? How does a cannonball know that by tracing out a parabola it is minimizing its action? Leibniz thought that he knew the answer and saw it as firm evidence for God’s creative power.

Leibniz agreed with Thomas Aquinas and other philosophers that even an all-powerful God must be constrained by the laws of geometry and logic. It would therefore be impossible for God to create a world containing logical contradictions. But this necessarily means the world includes some bad as well as good. So, although the world cannot be flawless, it must be the best of all possible worlds. Leibniz saw the optimization principles of mechanics as clear evidence of God’s role in the optimization of the universe.

However, as Bertrand Russell pointed out, it is a short step from here to an argument claiming that this must be the worst of all possible worlds. If the world was created by a malevolent demiurge, perhaps humans were given consciousness to maximize awareness of their suffering. Leibniz was lampooned mercilessly by Voltaire and since Candide, rational arguments for God’s role in the world have lost much of their force.

It is remarkable that so much physics can be described in terms of optimization principles. We now have a far better understanding of the origin of the action principle, and it is all due to quantum mechanics.

A version of this post originally appeared on Quantum Waves Publishing.

Nicholas Mee studied theoretical physics and mathematics at the University of Cambridge and gained his PhD in 1990 in theoretical particle physics, with a thesis titled Supersymmetric Quantum Mechanics and Geometry. He is the Director of software company Virtual Image and the author of over 50 maths and science multimedia titles. He is the co-author of The Physical World (OUP, 2017). Nicholas Mee is well-known in the maths education, popular science, and amateur astronomy communities, and his physics blog has a large established readership.