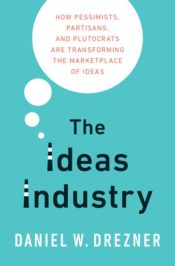 The Ideas Industry: How Pessimists, Partisans, and Plutocrats are Transforming the Marketplace of Ideas

Public distrust in authority figures has led to a significant rise in “thought leaders”. While this change in the marketplace of ideas has increased diversity in creative thinking, it builds obstacles for the public intellectuals trying to filter out the bad from the good.

In the following excerpt from The Ideas Industry, Daniel Drezner discusses the critical role of public intellectuals in a marketplace driven by thought leaders.

By “marketplace of ideas,” I mean the array of intellectual outputs and opinions and the extent to which policymakers and publics embrace those ideas. When a scholar publishes a book explaining why American foreign policy needs a rethink, when a think tank issues a report evaluating some aspect of statecraft, when a global brand strategist gives a TED talk about how the country’s climate change policy should be managed like a hedge fund, they will probably find their way into the marketplace of ideas.

When I refer to “public intellectuals,” I mean experts who are versed and trained enough to be able to comment on a wide range of public policy issues. The public intellectual serves a vital purpose in democratic discourse: exposing shibboleths masquerading as accepted wisdom. Public intellectuals are critics, and critiquing those who hawk bad policy wares is a necessary function in a democracy. When public intellectuals lose their prestige, it becomes that much easier for politicians or charlatans to advance an idea into the public consciousness, regardless of its intrinsic merits, through sheer, unflagging will.

The democratization of the marketplace of ideas has made it much harder for traditional public intellectuals to argue from authority.

Public intellectuals know enough about many things to be able to point out intellectual charlatans. Thought leaders know one big thing and believe that their important idea will change the world.

What is happening is that the marketplace of ideas has turned into the Ideas Industry. The twenty-first century public sphere is bigger, louder, and more lucrative than ever before. A surge of high-level panels, conference circuits, and speaker confabs allows intellectuals to mix with other members of the political, economic, and cultural elite in a way that would have been inconceivable a half century ago.

This surge in demand has benefited the entire intellectual class, but there has been another interesting effect. The Ideas Industry now rewards thought leaders far more than public intellectuals. This is due to three interlocking trends that configure the modern marketplace of ideas: the erosion of trust in authority, the polarization of American politics, and the dramatic increase in economic inequality.

There has been a slow-motion erosion of trust in prestigious institutions and professions for the past half century. After a post-9/11 spike in trust, the rest of the twenty-first century has witnessed a steady decline of trust in authority—and authority figures. The democratization of the marketplace of ideas has made it much harder for traditional public intellectuals to argue from authority. This allows for new concepts to emerge, but also makes it more difficult to expose bad ideas.

As America’s elite has gotten richer and richer, they can afford to do anything they want.

The polarization of American society—and American political institutions—is another phenomenon affecting the marketplace of ideas. The creation of parallel, segmented audiences that will support ideologically pure intellectuals has led to the emergence of new kinds of thought leaders. They can thrive in an information ecosystem devoid of contrary points of view.

The most important trend, however, has been the growth in economic inequality and the increasing importance of wealthy benefactors as a force in the marketplace of ideas. As America’s elite has gotten richer and richer, they can afford to do anything they want. A century ago, America’s plutocrats converted their wealth into university endowments, think tanks, or philanthropic foundations. Today’s wealthy set up their own intellectual salons and publishing platforms—and they are not hands-off about the intellectual output of their namesakes. Thought leaders will have an advantage over public intellectuals in pushing ideas that resonate with plutocrats.

There is a great deal of good that can come from the twenty-first-century Ideas Industry. It is surely noteworthy that a strong demand has emerged for new ideas and vibrant ways of thinking about the world. But like any revolution, there are winners and there are losers. These trends also handicap more traditional purveyors of ideas housed in universities or think tanks. Public intellectuals rely more on sources of funding that have either plateaued or abated. Some of these institutions have not adapted as quickly to the new ecosystem of ideas, even though some individuals housed within these institutions have. The result—like previous revolutions in agriculture and manufacturing—is a massive churn in the intellectual class.

What is needed is a symbiosis. The cure for what ails the Ideas Industry is not a return to more powerful gatekeepers—it is more discord and more debate. Indeed, public intellectuals are now needed more than ever. They serve a new and vital purpose. They need to analyze and criticize popular thought leaders. Public intellectuals are necessary to filter the quality thinkers from the charlatans.

Daniel Drezner is Professor of International Politics at Tufts University and a regular contributor to the Washington Post. Along with having one of the most heavily trafficked blogs in the world of academia, he is also the author of The Ideas Industry: How Pessimists, Partisans, and Plutocrats are Transforming the Marketplace of Ideas, The System Worked, Theories of International Relations and Zombies, All Politics is Global, and The Sanctions Paradox.