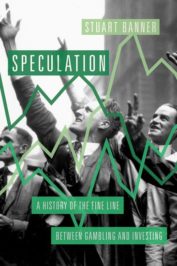 Speculation: A History of the Fine Line between Gambling and Investing

Is speculation ingrained into American culture? Economists dating back to as early as John McVickar have analyzed the American enthusiasm directed toward speculation. History indicates that the American approach to enterprise has differed from its European counterparts since its inception.

In this shortened excerpt from Speculation: A History of the Fine Line between Gambling and Investing, author Stuart Banner discusses the economic risks taken in early American history, and the cultural significance of speculation in the United States today.

Foreign visitors to the United States often remarked on Americans’ passion for speculation. “An American merchant is an enthusiast who seems to delight in enterprise in proportion as it is connected with danger,” declared the German journalist Francis Grund. “He ventures his fortune with the same heroism with which the sailor risks his life; and is as ready to embark on a new speculation after the failure of a favorite project, as the mariner is to navigate a new ship, after his own has become a wreck.” In Chicago, the English writer Harriet Martineau reported that “the streets were crowded with land speculators, hurrying from one sale to another,” to the point where “it seemed as if some prevalent mania infected the whole people.” The French economist Michel Chevalier found the same atmosphere in Pennsylvania. “Every body is speculating, and every thing has become an object of speculation,” he observed. “The most daring enterprises find encouragement; all projects find subscribers.” For an American, insisted the English missionary Isaac Fidler, trading “upon speculation and credit” was simply “the custom of his country.”

“The primary commodity in which early Americans speculated was land.”

Were Americans more prone to speculation than Europeans? The economist John McVickar thought so. “We observe in our country,” he reasoned, “the greater frequency of individual failures and of general commercial revolutions, than is exhibited in most of the older countries of Europe, where something like the slow pulse of age seems to render comparatively innoxious those seeds of disease, which in our own warmer temperament, run out into unsound and feverish speculation.” The Bankers’ Magazine thought so too. “The English might teach us Americans a wholesome lesson,” it reflected. “It seldom happens that an English merchant, tradesman, or banker abandons his rightful trade or calling to engage in any thing like doubtful speculation.” A missionary journal agreed that “in no other country has this rage for speculation been more fully shown than in the United States.” But this was hardly a universal view. James Kent, one of the leading judges of the early republic, recalled that there was no shortage of speculation in Europe either. “The dreams and the madness of speculation,” he concluded, “is a disease which has prevailed on each side of the Atlantic.”

The primary commodity in which early Americans speculated was land. There was plenty of it; it came in all kinds, from small parcels of developed land in eastern cities to vast and scarcely populated western territories; and its prices fluctuated, sometimes quite sharply. As Charles Francis Adams complained, “the great object of domestic speculation in America is undoubtedly land.” When lots were sold in the new capital city of Washington, according to Justice Hugh Henry Brackenridge of the Pennsylvania Supreme Court, most of the initial purchases “were on the speculation of an under sale to others, before the money was paid” by the ostensible buyer. Up in Maine, reported the promoter Moses Greenleaf, many of the landholders were nonresident specula­tors, who “purchased with a view of retaining the land for a time, in expectation of immense profits from the sale, when the country about them should become improved, and peopled by the exertions of others, without any trouble of their own.” Affluent and prominent Americans pooled their capital to form land companies, some of the largest business enterprises of the era, to buy enormous swaths of land in the West in the hope that future settlement would make the land more valuable. Land was simply a smart investment, advised the French lawyer J.P. Brissot de Warville, who took a close look at the land market while touring the new nation in 1788. Rather than putting money in a bank to provide for one’s children, Brissot suggested, “nothing appears to me better to answer this wise precaution, than to place such money on the cultivated soil of the United States.”

Contemporaries had little doubt that the United States was very different from Europe in this regard. “In Europe the value of real estate is in general comparatively stationary,” explained the chemist Robert Hare, “but here it is always an article of speculation; and as a large portion, while unproductive, is still held with a view to its future value, the estimate put upon that value is liable to great changes.” In Britain, noted Massachusetts Chief Justice Isaac Parker, no one owned sections of forest far away from their homes. “In this country, on the contrary,” he observed, “there are many large tracts of uncultivated territory owned by individuals who have no intention of reducing them to a state of improvement, but consider them rather as subjects of speculation and sale.” It was because of “the unrestrained spirit of speculation,” agreed William Tilghman, the chief justice of Pennsylvania’s Supreme Court, that “we see freehold estates pass in rapid circulation from owner to owner.”

Financial assets soon became a second big area of speculation, first with the issuance of state and national public debt securities to finance the American Revolution, then with the sale of US debt securities in the early 1790s, and finally with the steady expansion, all through the early republic, of the market for shares in banks and other business corporations. “Stockjobbing drowns every other subject,” James Madison complained in 1791, shortly after shares of the Bank of the United States were first sold to the public. In New York, he reported, “the Coffee House is in an eternal buzz with the gamblers.” Henry Lee traveled from Philadelphia to Alexandria, Virginia, around the same time and discovered that “my whole rout(e) presented to me one continued scene of stock gambling; agriculture commerce and even the fair sex relinquished, to make way for unremitted exertion in this favourite pursuit.” As shares of government debt and shares of business corporations became more widely traded, flurries of financial speculation would become regular features of American commercial life. By 1822, Chief Justice Tilghman could already deplore how quickly his fellow citizens threw their money into all these new corporations. “There has prevailed among us, to an unfortunate degree, a pestilent spirit of speculation, which has induced some, without means of payment, to subscribe to projects of all kinds, with a hope to selling out to advantage, as soon as the stock has risen,” Tilghman lamented. “These speculative subscriptions have many bad consequences.”

Stuart Banner is Professor of Law, UCLA, and author of How the Indians Lost their Land, American Property (Harvard), The Death Penalty, Possessing the Pacific, Who Owns the Sky?, Anglo-American Securities Regulation, The Baseball Trust, and Speculation: A History of the Fine Line between Gambling and Investing. He is based in Los Angeles, CA.