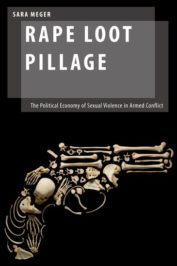 In recent years, the world has become all too aware of the prevalence of rape and other forms of sexual violence perpetrated in war. This form of gendered violence has repeatedly made headlines, such as the mass perpetration of rape in South Sudan, Darfur, Burundi, and the DR Congo.

As a result, gender-based violence has become an increasingly common consideration in foreign policy agendas, with sexual violence becoming the cornerstone of the women, peace, and security agenda of the past decade. Recognized in at least 13 UN Security Council resolutions passed since 2000, ‘conflict-related sexual violence’ is considered as serious of a security threat as nuclear and biological weapons, terrorism, and arms proliferation.

But when is rape a weapon of war? Despite decades of analysis and years of research on the topic, we still seem to have very little understanding about why sexual violence occurs in war and what we can do to prevent it in the future.

Instead, as influential as this policy and aid regime has been for bringing international attention to gendered forms of insecurity that occur during times of conflict, the harmonized “rape as a weapon of war” narrative has produced an unsustainable and ineffectual paradigm that is based ultimately on the fetishization of this violence. Armed groups are increasingly attracted to perpetrating rape to see their names in headlines and to get a seat at the bargaining table to voice their grievances. Aid organizations and NGOs in war zones are forced to compete for the same limited pool of funds, duplicating ad infinitum the same medical and social services strictly for victims of war rape, with no money to treat victims of other forms of war-related violence or the wider social, political, and economic effects of the conflict. Some people lie about being raped to access these services, while others lie about providing psycho-social care to get international aid funding.

Conflict-related sexual violence is considered as serious of a security threat as nuclear and biological weapons, terrorism, and arms proliferation.

While the security framework of ‘rape as a weapon of war’ is arguably preferable to the previous paradigm of neglect, the explicit focus on the mass use of sexual violence can obscure, or even deny the significance of other forms of sexual violence that coincide with conflict. It can also serve to homogenize the perceived purposes of mass rape, which is counterproductive in the pursuit of understanding the underlying causes of its use in war. Rather, the global policy regime that has emerged to respond to conflict-related sexual violence has focused on this type of violence as a profound insecurity that must be addressed at the strategic and tactical level, without highlighting the connections between the sources of insecurity in women’s lives both in times of peace and in war, or to place these specific forms of gendered violence on a continuum of violence. It overlooks the violence women experience in their daily lives within national borders, marginalizes other forms of violence that an intersectional gender perspective makes visible, including sexual violence by men against men, violence perpetrated by armed troops after a conflict, or within their own ranks, and that perpetrated by the UN’s own peacekeeping forces.

We need to disaggregate ‘rape as a weapon of war’ and the catch-all policy term ‘conflict-related sexual violence,’ in order to examine the contextual drivers of this violence within different types of conflicts. What makes individual men in the Congo take up arms and then use them to commit both opportunistic and systemic acts of rape? Is it the same as the men who commit acts of sexual torture on behalf of the Sri Lankan government against Tamils? Do their motivations mirror those of paramilitaries employing rape against indigenous and Afro-Colombian populations in the Colombian countryside? What about the enslavement of women by ISIS?

What is needed to understand and effectively address conflict-related sexual violence is an analysis of the production, construction, and exploitation of gendered violence within the particular contexts in which it occurs. I advocate for a political economy approach to understanding sexual violence in conflict, which recognizes the material bases of this violence, and how globalized economic and political structures relate to local gender inequalities that gives this violence its particular instrumentality in different conflicts.

Sexual violence is an effective instrument in different types of conflict because it works across different levels of gender, producing dividends not only in terms of individual gender identity (being a sexually virile and potent male warrior) but also in terms of socio-cultural constructions of gender (being a fearsome and powerful group), and in the global political economy (enabling the extraction of resources, access to land, or labour).

Thus, any serious attempt to tackle the problem of sexual violence as either a weapon of war, a tactic of terror, or an instrument of genocide, will require efforts to understand how the violence relates to the particular conflict dynamics in which it occurs, including both the social, political, and economic inequalities that often give root to armed conflicts, and the underlying gender inequalities that construct sexual violence as an effective means to achieve a political or economic agenda. This is by no means an easy task. However, until both the root cause of wars and the root cause of sexual violence within it are addressed, any direct efforts to ‘take the rape out of war’ are likely to remain ineffective in the long term.

Sara Meger is Assistant Professor in the Department of Gender Studies at Central European University. She is the author of Rape Loot Pillage: The Political Economy of Sexual Violence in Armed Conflict.