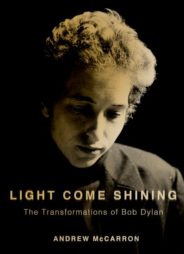 Bob Dylan’s complicated relationship with fame—evident in the fall of 2016, when he took weeks to acknowledge that he had been awarded the Nobel Prize in Literature—is nothing new. In this extract from Light Come Shining: The Transformations of Bob Dylan, author Andrew McCarron discusses Dylan’s complicated relationship with the press and explains how and why Dylan has created such a distorted, fragmented public image for himself.

Bob Dylan’s playful and at times antagonistic relationship with the press dates back to his early years on the folk scene in New York. When asked about his identity by straight- laced reporters with buzz cuts and sport coats, he frequently answered sarcastically: “a trapeze artist,” “a song and dance man,” “an ashtray bender,” and “a rabbit catcher.” Some of the more memorable moments from D. A. Pennebaker’s 1967 documentary Dont Look Back, which chronicles Dylan’s 1965 tour of England, involve Q&A sessions with reporters that elicit responses that range from absurdist to downright hostile. Dylan, ever- performing for Pennebaker’s camera, comes across as a bratty hipster. An entourage surrounds him at all times like a hive of spastic bees. His dark sunglasses, unruly hair, incessant cigarette smoking, and spitfire verbosity present the portrait of an amphetamine- fed young virtuoso trying to manage his considerable talent and fame. One stratagem was to lie to the press. Dylan explains during one interview that journalists were to be toyed with or ignored. “They ask the wrong questions,” he said, “like, What did you have for breakfast, What’s your favorite color, stuff like that. Newspaper reporters, man, they’re just hung up writers. … They got all these preconceived ideas about me, so I just play up to them.” The sardonic lyrics to his classic 1965 song “Ballad of a Thin Man” reflect the reality of an artist actively resisting the reductionisms of a journalist infa­mously named Mister Jones. The memorable first verse goes:

You walk into the room

With your pencil in your hand

You see somebody naked

You try so hard

But you don’t understand

When you get home

In Chronicles, Dylan writes about the public theater he en­gaged in to throw off the paparazzi, journalists, and fans who kept him from settling into a normal life after his retreat from the limelight in Woodstock. He traveled to Jerusalem and got him­self photographed at the Western Wall wearing a skullcap, and he leaked a story to the press that he planned to give up songwriting altogether and attend the Rhode Island School of Design. He was besieged by sensational stories published by people he’d never met. Some claimed that he was on an eternal search for meaning or in great inner torment. “The press?” Dylan writes in his memoir. “I figured you lie to it. For the public eye, I went into the bucolic and mundane as far as possible.” He was trying to protect his wife and children from the intrusions of celebrity, not to mention his sense of sanity. And compared to others art­ists who were quite literally killed by it— Ernest Hemingway, Jack Kerouac, Kurt Cobain, and Amy Winehouse, for example— Dylan fared reasonably well. A big part of his relative success re­quired deflecting the identities and projections that were hurled in his direction. But many of these projections became so entwined with his image that they were impossible to shake, turning him into a palimpsest of claims and counterclaims that distorted and fragmented the living and breathing man into a web of contested meanings.

Consequently, from an outsider’s perspective, it’s hard to know where Dylan ends and the rumor mill of celebrity culture begins. There have been rumors of all types: secret marriages and births, sleazy womanizing, palimony suits, unflattering memoirs (the majority of which Dylan’s lawyers have success­fully barred from publication), tabloid tell- all’s, creative nadirs and zeniths, drunken concert appearances, drug addiction, and frighteningly obsessive fans who have tried to forcibly remove his mask. Take, for example, Alan Jules Weberman. Described by Robert Shelton as “a would- be anarchist star, a wheeler- dealer of the freaked- out New Left,” Weberman spent several years in the late Sixties and early Seventies harassing Dylan by repeatedly digging through his garbage, phoning him at all hours of the day and night, and leading agitated mobs to his Greenwich Village home to demand that he stop shirking his duties as the conscience of a generation. Such incursions have become a fact of life. Dylan’s personal attorney, David Braun, is quoted by Clinton Heylin as saying, “In my twenty- two years’ experience of representing famous personages no other person­ality has attracted such attention, nor created such a demand for information about his personal affairs.”

Dylan’s identity as a shape- changing performance artist also makes him hard to pin down. Long captivated by the figure of the American minstrel, his musical identities have channeled the identities of a dustbowl Oakie, a Beat poet, a Nashville cat, a Civil War general, a Born Again evangelist, a delta bluesman, and— rather curiously— previous versions of himself. Albums like Love and Theft (2001) do as Dylan has always done: lifting liber­ally from traditional American music. Lyrics and melodies from the 1950s, 1940s, 1930s, and much earlier, flow through his songs like a Biblical deluge. Arguably Dylan’s greatest artistic contribu­tion has been his ability to appropriate and synthesize American traditions— folk, bluegrass, rock, gospel, etc.— and assume the real and imagined personae that accompany them.

As I suggested at the onset of this chapter, these musical and lyrical quotations aren’t only a form of postmodern blackface. Although there’s little doubt that some of his masks are the cal­culated stunts and tricks of a wily performance artist, his appro­priations are important expressions of his deeper sense of self and identity. Identity (whether artistic or personal), after all, isn’t a dis­crete entity that seamlessly develops as we travel through life but is instead an amalgamation of perceptions, feelings, memories, symbols, and narratives in a dynamic state of flux and reinvention. In the words of Sam Shepard, who chronicled Dylan’s Rolling Thunder Revue in 1975: “Dylan has … made himself up from scratch. That is, from the things he had around him and inside him. Dylan is an invention of his own mind.”

Andrew McCarron is a teacher and writer born and raised in the Hudson River Valley. He holds a Ph.D. in Social/Personality Psychology and currently runs the Religion, Philosophy & Ethics Department at Trinity School in New York City. His first collection of poetry, Mysterium, was published by Edgewise Press in 2011, and book length study of the poets Charles North, Tony Towle, and Paul Violi, Three New York Poets, was published by Station Hill Press in 2015.

Getting high on virtual reality