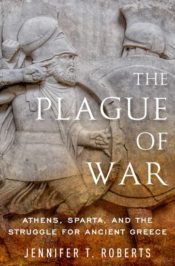 The Plague of War: Athens, Sparta, and the Struggle for Ancient Greece

The Battle of Marathon (490 BC) was the height of Persia’s first attempt to subjugate Greece. Athenian soldiers met Spartan ships near the town of Marathon, and—despite being outnumbered—drove Persia’s army out of Greece for ten years.

In this excerpt from The Plague of War: Athens, Sparta, and the Struggle for Ancient Greece, Jennifer Roberts describes what it was like to fight in the Battle of Marathon.

It was [the democratic state of Athens] that confronted the full wrath of Darius [the king of the Persian Empire] on the plain of Marathon. It was also an Athens filled with the same brand of trained soldiers to be found elsewhere in Greece: the hoplite. Starting with the rise of the polis, the Greeks— not just the Athenians— developed a fighting formation known as the hoplite phalanx. The fully evolved phalanx was custom­arily eight rows deep and ideally contained soldiers fitted out with the full hoplite panoply, each standing several feet from the next; of course, some less affluent soldiers could not afford a full panoply and were not as well armed offensively or defensively as their comrades. Customarily a hoplite soldier would carry a spear, usually about seven to nine feet long— maybe as much as ten— and a short slashing sword with a blade of some two feet, encased in a wooden scabbard covered in leather. He was well protected against the sharp points aimed at him by unfriendly soldiers on the opposing side.

His name came from his hoplon, a round concave shield about three feet in diameter made of wood faced with bronze and frequently emblazoned with vivid designs, sometimes from myth— though Spartans had their shields marked with the letter lambda, the first letter in Lacedaemon (the official name for the Spartan state). Because of its size, the hoplon was often quite heavy, sometimes nearly twenty pounds, and some soldiers even added a leather flap to the bot­tom to protect their legs, increasing the weight of the panoply still fur­ther. Additional weight was added by a cuirass, greaves, and helmet, all designed to be strong and to cover large areas of the body.

Helmets varied widely in design and often had horsehair plumes, which made the soldier look not only more imposing but literally taller; both Greeks and Romans, neither of them a tall race, regularly wore headgear in battle to compensate for their shortness of stature (not that the plumes made them any taller than their enemies, who were generally short men in tall plumes as well). As the armor was not customarily gov­ernment issue, however, quality of defensive armor varied in proportion to the financial circumstances of the individual soldier; some cuirasses were made not of metal but of various layers of linen or canvas, and for many men a horsehair helmet was out of the question. The full panoply in all its glory probably cost as much as a mid- price automobile today.

Most important to this style of fighting was the hoplon, for since the soldier gripped it with his left arm only, each hoplite would have every incentive to stick close by the soldier to his right and not cut and run. It was the design of the hoplite shield that made the phalanx, and in many ways the phalanx shaped the evolving middle class in the many city- states of Greece: it required solidarity, and it was open only to those who could afford the weaponry. Though Sparta, with its unique social structure, did not have a middle class, it certainly had hoplites in abun­dance, and to these men the state probably provided arms and armor. With the Persians bearing down on them, the Athenians indeed sent to the Spartans for aid. But the Spartans, an exceptionally religious peo­ple, were celebrating the festival of the Carnea in honor of Apollo and responded that their army could not march until the full moon. So the Athenians faced the Persians at Marathon with only a small contingent from their nearby ally Plataea to back them up. While the Persian force was more versatile, with its cavalry and archers, the Greek hoplites fought in heavy armor and disciplined formation in defense of their own land. According to Herodotus, of their ten generals it was Miltiades who con­vinced the Athenians after several days of waiting in a strong position on a hill, looking down at the Persians who outnumbered them mightily, that they had best not wait any longer, since there was disaffection in the city and any further delay might induce many back in Athens to go over to the Persians. A relative of Thucydides, the persuasive Miltiades went down in history as the hero of this great battle.

Hoplite battle was terrifying under the best of circumstances— the difficulty of seeing through the helmet, the insufferable heat inside the armor (quite possibly complicated by the hot urine and excrement of the petrified soldier), the clanging of weapons, the slippery ground soaked with blood, the choking dust everywhere, the groans of the dead and the dying. And with such a slim chance of victory…. Yet in the end, those Greeks who were convinced that they were literally throwing themselves into the valley of death were mistaken. Knowing they were outnumbered, their commanders had intentionally left their center thin, concentrating all their strength on the wings. Their heavier armor and longer spears stood them in good stead, and though the Persians broke through their center as expected, the Greeks succeeded in routing them on their wings. Fleeing to their ships, many of the Persians drowned flailing about in the marshes. It would be hard to say who was more sur­prised by the Greek triumph, the Greeks or the Persians.

Featured image credit: Image extracted from page 060 of volume 2 of Herodotus. The text of Canon Rawlinson’s translation, with the notes abridged by A. J. Grant, Historian. Original held and digitized by the British Library.  Public Domain via Wikimedia Commons.

Jennifer T. Roberts is Professor of Classics and History at the City College of New York and the City University of New York Graduate Center. She is the author of Athens on Trial: The Anti-Democratic Tradition in Western Thought and Herodotus: A Very Short Introduction, and editor (with Walter Blanco) of the Norton Critical Editions of Herodotus' The Histories and Thucydides' The Peloponnesian War.