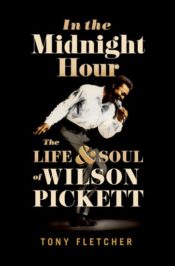 In the Midnight Hour: The Life & Soul of Wilson Pickett

On the night of 27 December 1895, at the Bill Curtis Saloon in St. Louis, Missouri, two black men, “Stag” Lee Sheldon and Billy Lyons, got into an argument. They were, supposedly, friends and drinking partners, but politics was about to come fatally between them: Sheldon, reputedly a pimp on the side, was an organizer for the Democrats, seeking to win over the black vote that had traditionally gone to the Republicans, for whom Billy Lyons recruited. At some point during an increasingly drunken debate, Lyons seized Sheldon’s Stetson hat; when he refused to return it, Sheldon took out his revolver, shot Lyons in the stomach, picked up his hat and calmly walked out; Lyons later died from his injuries.

As one of five murders reported in St. Louis that day, Lyons’ death might not have made much more than the local headlines—but for the fact that ragtime had recently arrived on the musical scene as a new means by which to tell a sordid musical story, and that events unfolded to make the “Stag-O-Lee” case a source of constant attention. Sheldon was arrested, indicted, bailed (to everyone’s surprise), defended in court by a white lawyer in front of a jury that then failed to reach a verdict, subsequently retried just a few weeks after that lawyer died from a drinking binge, found guilty, imprisoned, pardoned by the Governor a decade later, arrested for another shooting murder less than two years after that, and finally, died in prison hospital of tuberculosis, in 1912. By then, the rag-time song about the case had turned into “the Ballad of Stackalee”—in which the anti-hero, after being hung for the murder, kicks the Devil off his throne and takes over Hell.

In other words (and there were to be many more of them), “Stagger Lee” had become part of folklore, ripe for constant reinvention, retelling and revamping. The advent of recording did nothing to slow down that process, even when, in 1928, Mississippi John Hurt released a version widely considered as “definitive.” After literally dozens more interpretations, a euphoric 1950 “Stack A Lee” by New Orleans pianist Archibald held court for a while; in Korea, his fellow Louisiana native Lloyd Price adapted it for a play he put on while in the military, added an introduction, and upon return to America and his career, recorded it for release.

By this point, little remained of the original incident: rather than debating politics, the two men were playing dice outdoors after dark, Billy falsely calling seven on a roll of eight and taking Stagger Lee’s money, the latter going home to get his .44, finding Billy in a bar-room, and then shooting “that poor boy so bad” that the bullet went through Billy and broke “the bartender’s glass.” Placed on the back of a single more conventionally entitled “You Need Love,” Price’s “Stagger Lee” was so rhythmically addictive that disc jockeys couldn’t help but flip it, and although Dick Clark cited the song as too violent for American Bandstand, that didn’t stop it from spending the whole of February 1959 at number one. As typical with folk songs that date back beyond copyright protection, Price and his partner Harold Logan were able to claim the songwriting credits.

Come 1967, and there were plenty people out there saw Wilson Pickett as “Stagger Lee” incarnate. Pickett was a compulsive dice player in a black music community that was full of them. Backstage at the Apollo, up in the headlining artist’s dressing room, it wasn’t uncommon for the star and his entourage – which would suddenly consist of any number of renowned dice hustlers drawn by the very prospect – to engage in a $20,000 freeze-out. If you bet that sum of money and lost it, you were done; no going back to the bank. Then again, depending how many were in the game, you could be in to win $100,000 on one roll of the dice. One particular night backstage with Curtis Mayfield and Clyde “C.B.” Atkins, Sarah Vaughn’s ex-husband whose gambling habits left her heavily in debt, became seared strongly in the memories of those who could only stand back and watch, and those freeze-out stakes would only increase over the years as Pickett got richer.

“He was a very lucky guy with dice,” said bass player Earnest Smith of his employer. “I used to see him backstage at the Apollo, I’d see all the hustlers come by and he would break them. Dice is a game of chance but you can’t get scared. Scared money don’t win.”

Pickett was seen throwing at least one person who accused him of cheating at dice straight out the dressing room door, and it’s worth noting that, without even referencing “Stagger Lee,” his former band-leader Eddie Jacobs offered the following justification for why Pickett and crew (including himself) packed heat on the road:

“Guys shooting dice… a lot of them carry a gun. And sometimes you get guys who are sore losers and want to retaliate and you wanted a fair chance.”

Add in the fact that there was always something of the Mack Daddy about Pickett, a man of whom pimping rumors abounded and of whom criminal charges often failed to stick, and it was hardly surprising that he would be encouraged to claim “Stagger Lee” for himself at some point. He recorded the song during that first session at American, where the well-mannered “Memphis Boys” (as they would come to be known) put down a fiery backing track. Gene Chrisman never sounded more energized in Pickett’s company than with his rapid-fire snare drum intro; Tommy Cogbill employed a machine-gun bass line throughout, and the brass section offered enough musical ricochets as to render the listener exceedingly nervous. Pickett’s lyrics were not a complete copy of the Lloyd Price version: he swapped out Stagger-Lee’s “Stetson hat” for a Cadillac, and rapped at the start of an extensive coda about how Billy’s example ought to “teach the rest of you gamblers a lesson,” a personal warning perhaps to those who’d be looking to roll their crooked dice on him somewhere on the road.

In an additional move almost designed to repeat history, Pickett’s version was released on the flip of the “I’m In Love” single. While both tracks performed well at R&B, pop DJs uniformly made “Stagger Lee” their preference, and it became another substantial hit for “the Wicked” at the end of 1967. The singer had, in fact, dodged a bullet of his own when James Brown’s rendition was released first, but only on the Cold Sweat LP and not as a single; the two versions, heard side by side, serve to confirm the substantial differences in rhythmic approach and audio standards between two of the era’s leading soul men.

Tony Fletcher is the bestselling author of major biographies on Keith Moon, the Smiths, and R.E.M., as well as a memoir, a novel, and a history of the New York City music scene. Born in northern England, and raised in South London, where he started his own music magazine at the age of thirteen, he emigrated to New York City in the late 1980s. When not traveling with his family, he makes his home near Woodstock in the Catskill Mountains of upstate New York. A contributor to Salon and the Wall Street Journal, his writing has also appeared in Mojo, Rolling Stone, the New York Times, Spin, and Newsday, and he has contributed to a host of other publications, radio, and television shows worldwide.