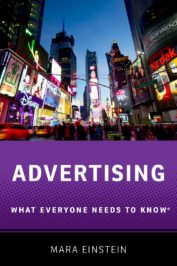 Advertising: What Everyone Needs to Know

Every year we worship at the altar of the Super Bowl. It’s the Big Game with the Big Halftime Show and the Big-Name Advertisers.

That we do this, explains why Donald Trump is now president. I’ll get to that shortly. But for now, back to the show.

From an advertising perspective, the Super Bowl is the most expensive commercial on television. This year, Fox charged upwards of $5 million per 30-second spot according to Sports Illustrated and that’s almost double what it was only ten years ago. The next closest program is the Academy Awards which gets about $2 million per commercial. Even the World Series—this year with the exciting inclusion of the Chicago Cubs—sold ads for $500,000, and that was for game seven. Advertisers are willing to pay those high prices for the Super Bowl because there is no other event when more than 110 million people of every demographic—moms, dads, kids, millennials, baby boomers—are watching in real time.

So who forked over the big bucks this year? There are many of the usual suspects, such as Anheuser-Busch (maker of Budweiser), GoDaddy (which traditionally runs a salacious ad but will tone it down this year), Pepsi, and Avocados from Mexico (which I suspect might pull out at the last minute if they can). New companies or companies trying to revive their brands, such as A 10 Haircare or Yellow Tail wine, advertise using a vast majority of their marketing budgets because they are hoping to make a big splash in a small amount of time.

Not all ads have been “leaked” prior to the game, so it is difficult to give you a best and worst. Of the ads I’ve seen, the John Malkovich ad for Squarespace is funny and entertaining, TurboTax using Humpty Dumpty to promote the ease of its services got me to laugh, and the Coen brothers do a tribute to “Easy Rider” for Mercedes which should easily appeal to its target of upscale boomers. My vote for worst thus far is a Mr. Clean ad, which shows the man in white sexily cleaning the house, a spot which has already created a lot of buzz but frankly left me flat because trying to make cleaning the house sexy is plain pushing it.

So what does all of this have to do with Donald Trump?

Since the 1930s, Americans have been framed as consumers rather than citizens according to historian Lizabeth Cohen in her book, A Consumers’ Republic. Buying products and services fueled the economy for decades, and simply going to the store was tantamount to fulfilling our civic duty. No more. As technology advanced and Silicon Valley disrupted more and more business sectors, our economy has become driven by Wall Street, not Main Street.

In her book, Strangers in Their Own Land, Arlie Hochschild explains the impact of this on our society. Middle class Americans—and particularly white, male, middle-class Americans—feel like they have been standing in line waiting for their due and everyone else is getting to jump ahead. Women got more rights, the government is helping African Americans through Affirmative Action, even endangered species are protected by environmental legislation while no one helps them. I’m not saying this is necessarily true. I’m saying this is what they perceive.

Integral to that perception—and something Hochschild does not address in the book—is the influence that media and advertising have on that perception. (I am not talking here about Fox News, which would take an article of its own.) Advertising and the programming in which it appears cannot but help make people feel like they are getting further and further behind. Advertisers are most interested in people with money to spend—particularly young people with money to spend—and their commercials reflect this. Imagine knowing that you can barely make a living, your home is not paid for, you didn’t go to college because you expected to work in a coal mine or a factory that didn’t require you to do so. You come home to relax and watch TV, and what is on? Shows about fabulously rich African Americans, overly educated white coastal intellectuals, and zombies. There’s no getting away from the idea that the American Dream is fundamentally broken.

A respite has been football, long the highest-rated programming on television. Unfortunately, that will likely be gone soon too. Television rights for football come up for renewal in 2021. As Barry Lowenthal, president of media buying firm The Media Kitchen states in an article on MediaPost, “Given the dominance of the streaming companies and the war chests being amassed by Amazon, Apple, Google and Facebook (FB is 14x the size of CBS), we should not assume that the broadcast and cable networks will win the next auction.” Four years down the road even this small relief will be a memory.

Businesses and celebrities have replaced government and gods. Malls have become vacation destinations. Companies implement cradle-to-grave marketing strategies. Mobile technologies enable advertisers to track us and sell to us 24 hours a day.

It makes perfect sense, then, that millions of Americans would buy into a come-on from a TV pitch man. Americans have been groomed to see advertising and business as the solution to our problems. A seemingly rich, seemingly successful businessman claimed he was going to “Make America Great Again” and more than 60 million people bought the brand.

But reality TV is far from real, and this Big Game is likely one of the last big events for advertisers. What we are seeing now is the price we pay for having paid more attention to capitalism and commerce than democracy and diplomacy.

Mara Einstein is a Professor of Media Studies at Queens College, City University of New York. She brings more than twenty-five years of marketing and advertising experience to this work. She has worked as a senior marketing executive in both broadcast (NBC) and cable (MTV Networks) television as well as at major advertising agencies working on such accounts as Miller Lite, Uncle Ben's, and Dole Foods. Mara is also the author of Advertising: What Everyone Needs to Know.