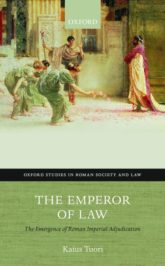 The Emperor of Law: The Emergence of Roman Imperial Adjudication

The first dynasty of Roman emperors, collectively known as the Julio-Claudians, knew how to make headlines. From the frequent accounts by contemporary and later writers of their use of torture, rape, and murder to the more recherché ways of humiliation and abuse such as seeking to appoint a horse as consul (as the historian Cassius Dio says of Caligula), there is little to suggest that the administration of justice was very high on their agenda.

Even if we make allowance for the motives of the authors who reported these salacious events, it remains puzzling that at the same time these very same emperors began to undertake extensive judicial tasks such as acting dutifully as legislators, judges, and legal administrators. How did that happen?

One of the greatest enigmas surrounding this issue is that there is no information concerning the way in which this came about. There are no senatorial decisions empowering emperors to become judges, no law or other regulation authorising it or setting out rules on who can appeal to the emperor and how. It simply appears as a practice, a shared conviction that this is something that the emperors did and were expected to do.

This is not to say that there was no precedent for it. Throughout the ancient world (and indeed beyond), rulers were expected to act as judges and to answer petitions from their subjects. Being a judge was a part of sovereign power, much like the medieval kings of France are represented (in stories at least) as sitting under oak trees and resolving legal issues.

The trouble is that the Roman emperors were not sovereign kings. During the first three centuries of the Roman Empire, Rome was still nominally a Republic and its supreme magistrates were consuls. The emperors were officially merely “first citizens,” the “first of the Senate” and so forth. The fact that the factual position of the emperor was so much in conflict with the official position was a source of constant instability. Some have even argued that through the very act of seeking to appoint his trusted horse Incitatus as consul, Caligula was making a statement of his power and the irrelevance of the Senate.

It may even be this constant instability and unpredictability of the early emperors that led to them becoming judges. As they were prone to acting with little consideration for settled practice, the emperors could in theory reverse any decision at will. What this meant was that anyone unhappy with a decision would seek to gain the emperor’s ear, present their quarrel and seek recourse. Because the legitimacy of imperial power rested on the special connection between the ruler and the people, the emperors would seek to respond to these queries.

From Augustus, the first emperor onwards, examples of petitioners seeking to appeal to the emperor abound. A widower named Tryphera appealed to Augustus after being unjustly accused of murder in the city of Cnidos. Augustus appointed a high-ranking magistrate to investigate the matter and resolved the issue in her favour. What stories like this, circulating widely and retold in the historical writings, did was to underline the power of the emperor and that the emperor would, if needed, right wrongs and be the good judge.

For the emperors, this was not necessarily a good thing. Countless petitioners seeking to present their (sometimes) minor issues would consume a lot of their time. Giving a ruling on an issue based on the story of just one party was equally dangerous and could lead to injustices. This is not to say that there would not have been advantages. Petitioners would reveal festering grievances, abuses of power by Roman officials that, if left unchecked, could lead to rebellions. The resolving of issues would give the possibility of enforcing the law equally and to advance new policies.

Perhaps as a result of these challenges, more dutiful emperors would appoint special officials to help them, experts in law that would answer the queries in writing and to instruct the local officials on how to proceed. Despite this, the very personal duty of the emperor to answer and to rule would continue. Petitioners would approach the emperors and the emperors would answer. This led to the most curious instances, where emperors with reputations for wanton murder and savagery would patiently sit and with expert knowledge negotiate complex issues of private law to give an equitable ruling.

Kaius Tuori is associate professor of European intellectual history at the University of Helsinki. He is the author of The Emperor of Law: The Emergence of Roman Imperial Adjudication and is co-editor of The Oxford Handbook of Roman Law and Society (OUP 2016).

The language of victory: 8 ancient phrases used by Emperor Justinian