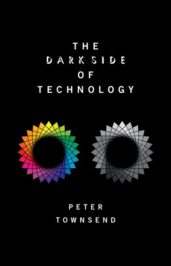 The Dark Side of Technology

The hype of technological progress is that it will change the world and make life better for everyone. For young technologists, this may be true, but their blinkered vision does not recognise that, not just the elderly, but many others, cannot cope with electronic communications and the benefits of on-line shopping or banking, etc. In many developed nations 25% of adults are of retirement age. Even for the fit and healthy ones, their colour vision will have significantly changed. They have difficulty seeing the blue end of the spectrum, they need larger typefaces, and better contrast. This is totally the opposite of the innovations from young designers, who introduce novel and more subtle colours, with weaker contrast and smaller fonts. Electronic displays use deep blue light sources in black backgrounds. Fine for teenagers, but totally unreadable for most pensioners.

Physical limitations of large fingers, stiffness from age or manual labour, and the normal shakiness with older hands are often met with keyboards that are too small and touch screens on compact smart phones that are frequently unworkable. Voice recognition alternatives are very public and fail to adapt to quavering voices, high pitch, or regional accents. Finding large computer keyboards is difficult; smart phones with a large button keypad do not seem to exist. These examples are just the tip of the iceberg. Marketing is ignoring a quarter of the population and focusing on gimmicks, games, and new apps to seduce gullible youth into buying the newest fashionable annual variants. The profits of this deliberately driven obsolescence are large, and the older market is ignored. Do designers not have parents and grandparents who can pressure them to change their ways?

Most services use electronic phone and computer contacts for answering questions and transactions such as banking. These are challenging for many people who prefer to speak to real people, not an automated voice response, or software which is not intuitive to a generation that did not grow up with it. Such uncertainties make these same people very vulnerable to computer fraud and scams, despite warnings that the emails or phone calls from their “bank” are rarely genuine. To the elderly, who are computer insecure, the phone calls claiming to be from a reputable software provider who need access to the computer are often taken at face value, with a resulting cost and lack of security.

More subtle scams, which may be technically legal, are where one uses the internet to contact a government department but does not notice the listing is via an advert. Everything then appears to be on a normal form, but inevitably there is a trap where one ticks a box that then results in having signed up to a long standing financial subscription, automatically deducted from the card or bank account. If the sum is modest then it may be never recognised.

Isolation is not confined to the old, but hits as hard at young people who are poor, or with limited knowledge. Finding employment in a society where many simple jobs have been taken over by computer software is increasingly difficult. Entrepreneurs see this move as good business, and for them it is, but the euphemistic “leisure time from repetitive work” means unemployment. The trend to make applications and interviews entirely online is a disaster for those that lack the skills to do this, even when they are well suited to the work that is available. Employers do not seem to recognise that face to face interviews are far more informative, and may settle for the apparently cheap option.

An ageing population should be delighted with advances in technological progress in medicine, but they should admit that extending life expectancy is only desirable if the quality of life is also maintained. Increases in the numbers of cancer and Alzheimer patients are in part merely the consequence of our ability to prolong life. Equally, medical “efficiency” may involve a few specialist units. Whilst they may be excellent, they do not replace the contact with a local doctor, who might even recognise you. I have seen many examples where patients have early morning appointments in the specialised treatment centres, that totally ignore the feasibility of an elderly person being able to reach them in time. The result is no treatment.

While technological progress does present a range of challenges to the ageing individual, one shouldn’t give up on it completely. To avoid being isolated as technology advances, my advice is to keep trying, proceed with caution, and maybe even associate as much as possible with young people; you will stay mentally young, this will keep you fit, and they can solve your technology problems.

Peter Townsend is involved in very diverse activities in academia, industry, and national labs in eight countries, in more than 15 topic areas. He has initiated five new areas of research, supervised 67 postgraduate students, and has written over 530 publications, plus patents, with more than 500 co-authors. His numerous scientific awards include a Doctor Honoris Causa degree from the Universidad Autonoma de Madrid and Finalist of Descartes Prize for Excellence in Research (for breast cancer detection). Other main activities include violin playing and fencing from County up to International level. Peter is the author of The Dark Side of Technology (OUP, 2017) and has written for the OUPBlog previously.