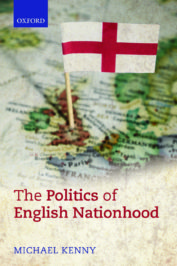 The Politics of English Nationhood

“Will the Prime Minister provide a commitment today that no part of the great repeal bill will be subject to English votes for English laws?” This seemingly technical query – posed by the SNP’s Kirsty Blackman at PMQs the day after the Prime Minister had outlined the government’s plans for Brexit – will have reminded Theresa May that, amidst the turmoil and drama of the current political moment, a powerful English – as well as Scottish – question is now salient in British politics. To the SNP, the new system of ‘English Votes for English Laws’, in operation in the Commons since October 2015 represents a brazen attempt by an English Tory party to turn Westminster into an English Parliament. In fact, given the balance of the current House, it is likely to become an issue only if those parts of the legislation that Brexit requires, which apply to England, are supported by an English (Tory) majority, but defeated by the Commons as a whole. And that will only happen if the Conservative parliamentary party is split, and its backbenchers willing to side with other parties and face down the howls of tabloid outrage that would follow.

But these questions of parliamentary procedure and tactics are really the tip of the iceberg. A more existential English question began to take root some years previously, well away from Westminster, in the deepening sense of disenchantment and dispossession felt by large numbers of the English, especially those who live in Northern working class communities, Eastern coastal towns, the Southern shires, those parts of the countryside where agri-business rules supreme, and the peripheral zones of the largest conurbations. It was in these regions where turnout for the Referendum was highest (and notably higher than the  areas that voted for ‘Remain’), and where – as different polls have consistently shown – people are more likely to identify most strongly as ‘English’ and view the restriction of inward migration as a priority.

A growing sense of assertiveness in these places prepared the way for the English rebellion that helped deliver Brexit. Class was, of course, an important determinant of voting intention too. But its variable impact across the UK, and the strength of the English desire to vote against what the governing elite wanted, can only be understood in relation to the deep-lying dynamics – associated with de-industrialisation, deepening regional inequalities, and political disillusion – that have eroded many people’s faith in the political mainstream. These trends were palpable from the mid 2000s, but were either ignored or denied by the doyens of the political mainstream. They manifested first in the growing salience of the immigration question, and increasingly in a simmering sense that the English were the ‘last, forgotten tribe of the United Kingdom.’

Importantly, this sense of national frustration is more regionally and ethnically varied than crude stereotypes of the ‘white working class’ tend to suggest. Indeed the gathering feeling that ‘England’ provides the imagined community, where the overlooked and anxious can find some kind of authenticity and a feeling of rootedness, in a world characterised by dizzying kinds of technological and cultural change, began to generate a much more bifurcated sense of national allegiance among the English. These trends have served to undermine the ingrained habit of regarding Englishness and Britishness as labels that could be easily exchanged one for the other.

But there is of course another England to consider as well. In some of its largest and most diverse cities – most notably in London but also in places like Manchester and Liverpool – most people voted to ‘Remain.’ And it is in these places where support for Britishness, rather than Englishness is also highest in England.

These very different forms of national outlook, previously buried beneath the waves of British party politics, are – in the context of Brexit – exacerbated and made transparent. Many of the English have come to feel that London is another country, dominated by plutocrats and remote elites – even as it contributes disproportionately to public investment across the UK.

These were some of the dynamics and sensibilities I sought to reflect in the book that I published early in 2014 on this gathering sense of Englishness, and its potential political and constitutional ramifications. Since it appeared, some of the possibilities I considered turned into realities, with a speed I did not foresee, and they caught the UK’s political parties flat-footed.

David Cameron sensed the possibilities of this new mood when he raised the flag of English devolution in the aftermath of the Scottish independence referendum in 2014, but followed up with a technically complex reform that matters greatly to the House of Commons, but not to anyone else. He caught this mood again as his party commandeered the political agenda during the General Election campaign in 2015, focusing relentlessly on English fears of a weak Labour government propped up by the SNP.

In making restricting migrants a red line in its current negotiating position, and seeking to remove the UK from the Single Market, the May government appears to be ready and willing to heed the voices of the dispossessed of England. And yet it faces immense obstacles in delivering on this promise. This version of Brexit requires a re-assertion of the powers and ethos of the unitary state which are in profound tension with the multi-tiered, asymmetric polity that the UK has turned itself into, since devolution. It looks likely to generate profound conflict with Scotland, and may pave the way for a further Independence Referendum, and also with London and its financial services industries, a vital source of tax revenue for a state still seeking to reduce its public spending.

Equally, if May’s government really does seek to turn ‘Global Britain’ into a deregulated, low-tax, offshore island, it is likely that many of those who voted for Brexit will lose out once more. For the kinds of free trade arrangements which many Brexiteers appear to favour, are exactly the forces that have opened up the chasms between capital city and provinces, and between the networked and the ‘left behind’ which have done so much to bring a disaffected, political Englishness into being.

Michael Kenny is Professor of Politics at Queen Mary University of London. He is the author of The Politics of English Nationhood.