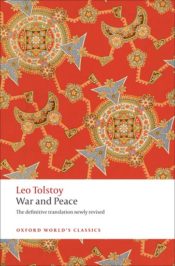 Maybe you’ve read War and Peace; maybe you haven’t. Maybe you got part of the way through its 1,392 pages and lost the will to continue. (It happens to the best of us!) If you’re in one of the latter two camps, Brian E. Denton is here to change your mind. A freelance writer based in Queens, New York, Brian has read War and Peace seven times already and has no plans to stop there. I talked to Brian to find out what makes War and Peace so special, and why you might want to join him in making reading the book a New Year’s Resolution for this year.

What’s this project you’ve been working on, and how long have you been doing it?
My project is a year-long, chapter by chapter, daily devotional reading of and meditation on Tolstoy’s War and Peace. I read the novel for the first time seven years ago. I loved it. I wanted to read it again. The only problem was, and I’m sure my fellow bibliophiles can relate, I also wanted to read other books. I’m just promiscuous like that. So the question presented itself: how was I to keep reading War and Peace, a notoriously long novel, and still keep up with my other reading interests? While looking at Constance Garnett’s Modern Library edition I noted that the book is divided into fifteen parts and two epilogues (yeah, you read that right). Each part, in turn, is divided into chapters. Small chapters. I counted those small chapters and there turned out to be 361 of them. And that’s when I decided that I’d spend each year of the rest of my life cycling through War and Peace at the rate of one chapter per day. That’s exactly what I’ve been doing for the past six years. It’s a curious, fun, and reflective way to read the book. It also makes it much easier. The longest chapter is only eleven pages and the average chapter length is just shy of four pages. I know this because last year I started a spreadsheet to compare the different translations. Anyway, this year I decided that I want to share this method of reading the novel with other people. To that end I’ll be publishing the devotional, complete with a synopsis and daily meditation based on each chapter starting 1 January 2017, on Medium.

Do you have a favorite chapter?
My favorite chapter occurs on Day 135 of the yearly cycle. Here we find Natasha and Nikolai visiting their uncle’s home after a busy day of hunting in the woods. There is a lot going on in their lives. Nikolai is on leave from a nasty war. Natasha is engaged to Prince Andrei but at the price of having to spend one year separated from him as a condition laid upon the engagement by his father. All this while their family is on the brink of financial collapse. The night concludes with a trap ride home through the dark. As the trap sloshes along the wet earth road and as the horses splash through the mud below the two siblings drop into a deep contemplative quiet under the canopy of the moon shadowed trees above. It’s a moment we’ve all experienced: a seemingly insignificant, quotidian moment small to the world but expansive to the individual. Natasha’s soft whistling of Russian folksong is the perfect punctuation to the scene as the two share a private and intimate moment while all about them history is on the move and nations are at war.

What inspired you to start reading War and Peace?
My brother Kevin. He bought me an old hardcover edition for Christmas one year. It has a fantastic bookplate in it featuring a black and white photograph of a farm with the words “Our Book” written on it. It’s one of my favorite books.

What else do you read while you’re reading War and Peace? Have you read any of Tolstoy’s other works?
When I was in high school I thought I was an anarchist. It turns out I was just an idiot. But at least I read lots of Tolstoy’s nonfiction on pacifism, Christianity, and anarchism. I’ve also read Anna Karenina and his short stories. My favorite is The Kruetzer Sonata. In addition to Tolstoy I read mostly the classics, the Great Books. I also enjoy the Stoics and history. There are a few contemporary fiction authors I read like Margaret Atwood, Jennifer Egan, Tao Lin, Emily Holleman, Stephen King, and Elena Ferrante.

What have you learned from reading so many different translations of the same book? Do you notice many differences between the translations?
I’m not a literary scholar or theorist so I’m not equipped to answer this question with any credibility. I will say that some translations, like Garnett’s, are more anglicized. Some don’t include any of the French. My favorite versions includes the untranslated French. Stylistically this is important because it’s closer to how the Russian aristocracy spoke in those days. Aside from that I’ll note that there are some major differences in the organizational conventions between the different translations. For instance, the Oxford World’s Classics Maude translation divides the novel into Books, Parts, and Chapters. So too with the Dunnigan and Edmonds. The Garnett has only Parts and Chapters. All the translations I have contain the same number of chapters though, except for the Norton Critical Edition which appears to break up chapters only when there is a change of scene. I don’t understand why the organizational conventions differ between translations.

What will you do when you run out of translations to read?
Read them again.

Brian E. Denton is a freelance writer living in Queens. Follow him on Twitter at @brianedenton and on Medium at @BrianEDenton.

Lucie Taylor is a publicity assistant at Oxford University Press in New York.