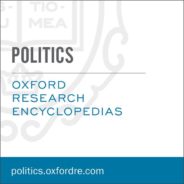 Substantive, peer-reviewed, and regularly updated, the Oxford Research Encyclopedia of Politics combines the speed and flexibility of digital with the rigorous standards of academic publishing.

America has just experienced what some claim is the most unusual presidential election in our modern history. The Democrats picked the first woman to run as a major-party candidate, while the Republicans selected an alt-right populist who is the first modern candidate never to have held an elected office. With battles in 140-character bursts, the tenor of the campaign was unusual to say the least; the final results surprised almost every election soothsayer and even the candidates themselves. However, was the voting outcome really a major deviation from normal voting results in the United States?

Political scientists describe a “normal election” as occurring when both campaigns are evenly matched in their appeals, and thus voters rely on their long-standing partisan identification to make their voting choice. Scholarship generally sees such partisan identities as a beneficial trait, because they provide voters with a cue on how people like themselves generally vote. Partisanship routinely is among the very strongest predictors of voting choice.

Every presidential election year, the American National Election Studies (ANES) asks Americans about their party loyalties and the strength of their loyalties, arraying them from Strong Democrats to Strong Republicans along a horizontal axis. Figure 1 shows what proportion of each partisan group voted for their own party (and of independents for the Democratic candidate).

From 2000 to 2012, the degree of party loyalty is striking. A full 97% of strong Democrats voted for their party across these elections, and 97% of strong Republicans did the same. It didn’t matter if the Democratic candidate was a white southerner with a long political resume (Gore in 2000), a liberal senator from New England (Kerry in 2004), or an upcoming freshman senator from the Midwest who just happened to be black (Obama in 2008). The same pattern exists among Republicans. Virtually all of the partisan groups voted more than 85% of the time for their own party’s candidate. It should also be noted that the Democratic vote share among independents is shown here. As you can imagine, they are more likely to change their voting preferences across elections.

The 2016 election seemed to challenge this conventional model of partisanship and voting. Hillary Clinton’s campaign targeted women, Hispanics, and gays more explicitly than any Democratic candidate in the past. Donald Trump supposedly appealed to a different type of Republican voter, and swung three major states from the Democrats’ blue Midwestern wall. The rhetoric of the campaign also seemed to test traditional partisan loyalties. In almost every way, this was not a “normal” election. Or was it?

Results from the ANES won’t be available until spring 2017, and they’ll furnish the definitive evidence, but national exit polls from the last five elections provide useful data on the persisting impact of party identification (Figure 2).

Even combining strong and weak partisans, Democrats and Republicans in the exit polls report virtually the same 90% level of voting loyalty across elections—and 2016 is no exception. Clinton wasn’t noticeably more successful in attracting crossover Republican voters, and Trump didn’t make major inroads in gaining disaffected Democrats. Electoral change occurred at the margins and among independents.

If the 2016 ANES shows these same patterns in its data, what are the implications for the study of elections? An important lesson is that popular interpretations of the 2016 election as a fundamental shift in political alignments—a white backlash, a populist movement for fundamental reform, or other media claims—ignore the more profound stability of voting patterns for most Americans. Pundits and the mass media focus on the unusual, but electoral change occurs at the margins of the major partisan divide. Thus, the president-elect’s claims of a large mandate for change are implausible, especially when Clinton outpolled Trump by nearly three million votes. Most partisans vote for their partisan team, rather than the coach, which dulls the policy mandate of elections.

A second lesson that comes out of all of this is the growing electoral significance of non-partisans. Independent voters have grown from a quarter of the public in the 1950–60s to two-fifths in the past decade. As both figure 1 and figure 2 show, independents are more likely to be swing voters who respond to the candidates and their campaigns. And the exit polls indicate that independents have trended away from the Democratic Party in the last two elections.

Finally, 2016 seems to highlight the limits of partisanship as a cue for reasonable voting choice. At the end of the campaign, most partisans came home to vote for “their party,” virtually regardless of the candidates. This is more impressive since party identities are so stable across elections. In normal times, party identification can be a valuable guide for voters. But partisanship can also become blinders that keep voters from seeing events and the candidates objectively. Effective partisan identities shape perceptions of events, networks of information, and, ultimately, voting choice. Democratic identifiers often ignored Clinton’s limitations, just as most Republicans discounted criticisms of Trump. The downside of relying on these cues is evident when party cues are not an accurate guide to one’s interests. The 2016 election may be a case in point.

Russell J. Dalton is a professor of political science at the University of California, Irvine. He has authored or edited more than twenty books and more than a 150 research articles. Dalton has been awarded a Fulbright Research Fellowship, Scholar-in-Residence at the Barbra Streisand Center, German Marshall Fund Research Fellowship, the POSCO Fellowship at the East West Center, and the UCI Emeriti Award for Faculty Mentorship. He is an editorial board member of the Oxford Research Encyclopedia of Politics and wrote the article "Party Identification and Its Implications."