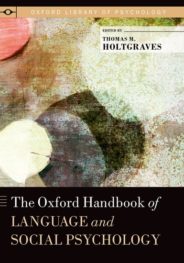 The Oxford Handbook of Language and Social Psychology

Donald Trump has always had a rocky relationship with the truth. The fact that his pronouncements often fail to align with reality has now simply become an accepted fact. In earlier times candidates who spoke this way would have quickly fallen off the map. Why not Trump? One interesting take on this is the claim that his statements should not be taken literally. What exactly does it mean to not take something literally? Is this just an after-the-fact excuse for his impulsive pronouncements? Or is it something else? And if his statements are not to be taken literally, then how should they be taken? What is the alternative to taking something literally?

Nonliteral language is common. Metaphor, hints, hyperbole, sarcasm, irony, politeness, and many others are all instances of nonliteral language; times when a literal reading (taking words in their most basic sense, with little in the way of interpretation) fails to capture the speaker’s intended meaning. Sometimes the intended nonliteral meaning is the exact opposite of the literal meaning, as with sarcasm. People speak nonliterally frequently and usually without communicative difficulty. Although nonliteral language is potentially ambiguous (more on this later), misunderstanding is often minimized because people typically know how to interpret nonliteral language. This is largely a result of the fact that we tend to converse with others who know what we know, that is, with whom we have a degree of shared common knowledge. So when I say to my friend “My job is a jail” he will take me to mean that my job is like a jail; in other words, that I am speaking metaphorically. My friend knows where I work and that it is not literally a jail. If I would say this to a complete stranger there is an increased risk of misunderstanding.

Donald Trump’s most frequent trope is hyperbole, the use of extreme exaggeration that is not intended to be taken literally. For example, during the presidential campaign Trump claimed that President Obama was the founder of ISIS. Many observers assumed that this was not to be taken literally; obviously Obama was not literally the founder of ISIS, although one might argue that he created the conditions for the rise of Isis. When Trump was asked about this the next day by host Hugh Hewitt and given the opportunity to opt for the nonliteral meaning, he refused, confounding almost everyone. Or take his claim that he will build a 50-foot wall along the Mexican border, that Mexico will pay for it, and that it will be a great, great wall. Hyperbolic exaggeration, right? Possibly. We simply don’t know.

Why so much hyperbole? Why make extreme pronouncements that are clearly not true? Trump himself, in his book The Art of the Deal recommends such a strategy, a strategy that he calls truthful hyperbole (which of course is a logical impossibility). The idea is that hyperbole can be useful in negotiations, a means of staking out an extreme, initial position. Well, he didn’t really mean (literally) that the United States would build a 50-foot wall, or that Mexico would pay for it, but rather that he would take an extreme and firm position on immigration. Also, hyperbole can be used to elicit an emotional reaction in recipients. No doubt this appears to be one of Trump’s goals at his rallies, and it is there that he frequently speaks nonliterally. He also exaggerates frequently when he tweets, possibly for the same reason.

Another advantage of saying things nonliterally is that it gives one the option of deniability. Hence Trump can respond to any criticism of an exaggeration by simply saying he didn’t mean it literally. Who would take literally a claim about building a 50-foot wall along the Mexican border? Or that Obama is the founder of ISIS? The benefits of this move have been described and documented by Steven Pinker. In this way, nonliteral language allows one to have it both ways; if not questioned, the assertion stands, but if questioned he can just claim that he wasn’t speaking literally, a move that Trump has sometimes made.

So what’s the problem? First and foremost, with nonliteral language there is an increased risk of misunderstanding. Certainly literal meaning can be misunderstood, but nonliteral meaning requires an extra layer of interpretation that increases the likelihood of misunderstanding. Also, our beliefs and attitudes often influence how we interpret what others say, especially when they speak nonliterally. For example, when Stephen Colbert played a blow-hard conservative commentator on the Steven Colbert show his satire was fairly obvious, but not to all. Some actually took him quite literally. This of course is partly the reason that die-hard Trump supporters are relatively unbothered by his over-the-top pronouncements.

The likelihood of misunderstanding with nonliteral language is increased when speaking to people from different cultures. This is because the knowledge that underlies how something is to be taken varies over cultures and this can become an obstacle for cross-cultural communication. President Trump’s pronouncements will be heard (and potentially misunderstood) all over the world; those not familiar with his style may be misled.

In the end, no one really knows what Donald Trump means with some of his more extreme pronouncements. His utterances may be strategic, an attempt to manipulate the emotions of a crowd, to create chaos, to establish a particular line for a negotiation. The problem is that being President of the United States is different from doing real estate deals. A president’s words have consequences; they can move markets and start wars. This is not to say that presidents shouldn’t speak metaphorically. They can and have and usually with good effect. When Bill Clinton said he wanted to “build a bridge to the 21st century” everyone knew he was speaking metaphorically. But not everyone knows how to take Donald Trump’s remarks. The relationship between intentions and language is murky at best. In Trump’s case it may be non-existent.

Thomas Holtgraves is a professor of Psychological Science at Ball State University in Muncie, Indiana. He has conducted interdisciplinary research, supported by the NSF and NIH, into multiple facets of language and social psychology. Thomas is also the editor of The Oxford Handbook of Language and Social Psychology.