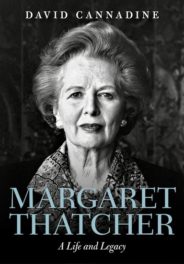 Margaret Thatcher: A Life and Legacy

“The full accounting of how my political work affected the lives of others is something we will only know on Judgment Day,” stated Margaret Thatcher in the year 1995. The “Iron Lady” indeed affected the lives of millions, among them historian David Cannadine, whose thoughts turn to two Mrs.Ts: one was “the dominant British public figure of her generation”; the other, a formative influence on his own early life. This article is an extract from his book Margaret Thatcher: A Life and Legacy:

I first encountered what was in retrospect Margaret Thatcher’s avatar and anticipation during the autumn of 1955, when I began my formal education as a pupil at a state-funded, Church of England primary school on the western side of Birmingham. The school’s headmistress was “Mrs Thurman” (or “Mrs. T”), and she was a figure by turns unforgettable, intimidating, charismatic, and inspirational.

She was always impeccably coiffured, she often wore well-cut blue suits, she was tirelessly and overwhelmingly energetic, and when she lost her temper she was utterly terrifying, reducing not only her errant pupils, but also grown men, to quivering jelly and tearful wrecks. She was a brilliant headmistress. Her motto for her school was “Only the best is good enough”, and she constantly urged us all to strive to make the most that we could of ourselves.

It was not until later life that I came to realize just how much I owed her. Unlike many in the teaching profession of her day, Mrs. Thurman was a staunch Conservative; she was also a committed Christian, and a vehement anti-Communist, and I can still recall the speech she gave, at a morning assembly in 1956, denouncing the Soviet invasion of Hungary as an unconscionable act of tyranny and aggression.

So when Margaret Thatcher burst upon the British political scene during the 1970s, initially as Secretary of State for Education, and subsequently as Conservative Party leader and Prime Minister, I thought that I already knew something about this second “Mrs T”: for in her appearance, energy, demeanour, and attitudes she seemed to bear a close resemblance to Mrs. Thurman, albeit multiplied by a hundred.

For most of the 1980s, I lived and worked in Britain, and, like many people, I regarded Thatcher as in some ways admirable, but in others difficult to take. From 1988 to 1998, I taught British history at Columbia University in New York: Thatcher was a marvellous subject on which to lecture, she invested Britain and thus British history with renewed interest and fascination for a transatlantic audience, and she was warmly and widely admired by American Republicans, who could not understand why her own party had turned against her in November 1990.

On returning to work in the United Kingdom, I found myself sitting on a University of London committee that Margaret Thatcher chaired, and the early impressions that I had formed of her were amply confirmed. She was past her prime-ministerial prime, but it did not require much imagination to recognize and appreciate how impressive she must have been at the peak of her powers, both in terms of the extraordinary force of her intimidating personality and her complete mastery of the business in hand.

By the time Thatcher died in 2013, she had been in public life for more than forty years, she had been the dominant figure in Britain during the 1980s, I had seen how she had been regarded on both sides of the Atlantic, and thanks to the earlier encounters with Mrs. Thurman I had, albeit inadvertently, been given more than just an inkling of the remarkable person that she undoubtedly was. So when, two years ago, my colleagues at the Oxford Dictionary of National Biography urged that I should contribute the entry on her, I found the invitation – and the challenge – irresistible. It would be the largest entry for any twentieth-century prime minister since Churchill’s, but with the added complication that while some people regarded her, like him, as having been the saviour of her country, others saw her in a completely different light.

“Divisive” was the word often used to describe Thatcher, by friend and foe alike, during her decade of power and on into her retirement, and it continues to be applied in the years since her death. In writing my entry on her, I sought to be as even-handed as possible, viewing her with what I regard as a necessary and deserving combination of sympathy (she was a major historical figure, with many admirable qualities) and detachment (her critics, both inside the Conservative Party and far beyond, often had a case, although not invariably so).

She was deeply and romantically patriotic, but this was not easily reconciled with her belief in free markets, liberal economics, and globalization. “You and I,” she once told her chief press secretary Bernard Ingham, “are not smooth people.” There are times when nations may need rough treatment. For good and for ill, Thatcher gave Britain plenty of it.

David Cannadine is Dodge Professor of History at Princeton University and General Editor of the Oxford Dictionary of National Biography. He is one of the world's best-known historians and historical biographers, and an expert on Churchill and political leadership. The author or editor of thirty books, David Cannadine is also a regular broadcaster on radio and television. His most recent publications include The Undivided Past (2013) and George V: the Unexpected King (2014), as well as the series Prime Ministers' Props for BBC Radio 4 (2016). This blog is adapted from the introduction to his book Margaret Thatcher: A Life and Legacy.