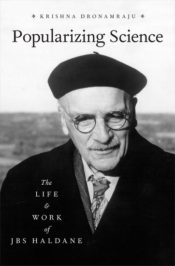 Popularizing Science: The Life and Work of JBS Haldane

John Burdon Sanderson (JBS) Haldane (1892-1964) was a leading science popularizer of the twentieth century. Sir Arthur C. Clarke described him as the most brilliant scientific popularizer of his generation. Haldane was a great scientist and polymath who contributed significantly to several sciences although he did not possess an academic degree in any branch of science. He was also a daring experimenter who was his own guinea pig in painful physiological experiments in diving physiology and in testing the effects of inhaling poisonous gases.

JBS was the son of John Scott Haldane, Oxford University physiologist, who trained JBS from childhood in the fundamentals of science. He was educated at Eton and Oxford University, graduating in classics in 1915. His early research was in the physiology of respiration in collaboration with his father. The research career of younger Haldane was interrupted when he joined the Black Watch in the First World War. He was wounded and was sent to India for recuperation at which point he became fascinated by the country and its culture, leading him to spend the last seven years of his life there.

Haldane led a turbulent life. His first marriage to Charlotte Franken, a journalist, involved a sensational divorce and dismissal from Cambridge University, although he was reinstated later. Later he married his young student Helen Spurway. He loved controversies. Some did not serve him well, as in the case involving T. D. Lysenko. Under the influence of Lysenko (and his friend Stalin), the science of genetics was suppressed in the Soviet Union, and Haldane was caught in a dilemma, as a Marxist and as a distinguished geneticist. Haldane’s prevarication highlighted the controversy, which eventually led to Haldane’s decision to move to India.

Before the war, JBS and his sister Naomi bred guinea pigs and mice, leading to the discovery of first case of linkage in vertebrates. After the war, Haldane continued his research in genetics, making important discoveries related to gene mapping, including the first mapping function which led to a more accurate method of gene mapping. His genetic contributions laid the foundation for what came to be known as the Human Genome project.

Haldane’s great skill in popularization first became evident with his highly successful Daedalus; or, Science and the Future (1923) which influenced his friend Aldous Huxley’s Brave New World. The scientific predictions of Daedalus ranged from production of ectogenic children (‘test-tube’ babies) to possible uses of nuclear energy. Haldane’s Daedalus raised ethical and moral dilemmas resulting from a biological revolution which occupied our attention for decades to come.

From 1924 onwards, Haldane published a series of mathematical papers on Darwinian evolution. This was an evaluation of the process of natural selection in terms of Mendelian genetics. This was considered Haldane’s most outstanding contribution to science. Haldane continued to publish papers in population genetics until his death in 1964. His early work was summarized in his book The Causes of Evolution (1932) which is considered to be one of the foundations of population genetics. Among Haldane’s notable contributions to population genetics are methods for estimating human mutation rates (in relation to hemophilia), and methods for estimating genetic damage resulting from radiation. His work, as well as that of others, has contributed eventually to the banning of open-air testing of nuclear weapons.

Observing the co-occurrence of malaria and the hemoglobin disorders such as sickle cell anemia (as well as thalassemia) in the Mediterranean region, Haldane deduced that this may be due to an interrelationship between malaria and these diseases, quite possibly the carriers of certain forms of these diseases may be more resistant to malarial infection. Later this was shown to be correct by other investigators. Individuals with the heterozygous form of sickle cell anemia were found to be resistant to malarial infection. This work has been extended to the study of genes for immunity in the genome project.

Haldane’s self-experimentation involved the testing of the toxic effects of carbon monoxide and carbon dioxide, and later the diving and inhalation of various gaseous mixtures to escape from submarines under water, which he undertook for the British Navy during World War II. Haldane’s work on the effects of extremes of temperature and pressure while inhaling poisonous gases continued to play an important role in diving and space research.

His legacy is an oeuvre of documents written for academics and for the public. He continued to make significant contributions to scientific research until his death in 1964 in India.

Krishna Dronamraju is an Indian-born geneticist and President of the Foundation for Genetic Research in Houston, Texas. Dr. Dronamraju completed his PhD from Indian Statistical Institute in Calcutta under the guidance of JBS Haldane. Dronamraju also completed advanced training at University College London and Johns Hopkins School of Medicine, as well as a postdoctoral fellowship in genetics at the University of Alberta. He is the author of Popularizing Science: The Life and Work of JBS Haldane.