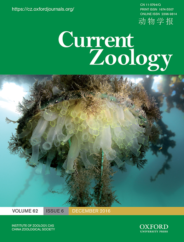 Current Zoology (formerly Acta Zoologica Sinica, founded in 1935) is a bimonthly, peer-reviewed international journal of zoology. It publishes primary research papers in the fields of ecology, evolution, and behaviour.

The globe has never been more connected. The anthropocene has seen the world become entwined in a comprehensive web of trade and transport. Within this extensive interconnectivity, humans are altering the composition of the earth’s biota, providing vehicles for organisms to hitchhike around the planet. Organisms that before were restricted to areas by geographical barriers or limited natural dispersal capability are able to establish in novel areas beyond their native range limits, where they may be free from the pressures that restrict them in their native range. If they do well and become self-sufficient in this novel area, they can spread and proceed to alter the local area potentially causing serious ecological damage. Such organisms are termed invasive species, and biological invasions are having such an impact on biodiversity that there are now few topics more critical to contemporary biodiversity and ecology. The field of invasion biology has opened up to study these species, and fortunately, it is equipped with a potent tool: the genetic code.

Deciphering the genome (the complete genetic code) of any species can lead to a wealth of knowledge. By analyzing an invasive species’ DNA, an invasion geneticist may untangle, among other things, its origin, its invasion history, and any potential hybridization with native species. These all provide vital tools when informing management efforts tackling biological invasions. The main problem with such an analysis was that, until recently, DNA sequencing (reading the genetic order of the nucleotide bases, i.e. adenine, guanine, cytosine, and thymine) was an expensive and time-consuming process, especially when analyzing a great number of individuals.

This ability to generate orders of magnitude more data from NGS technology leads to some exciting prospects for invasion biology, and has turned invasion genetics into a more comprehensive discipline. Firstly, it makes the assembly of full genomes more accessible. This means that an added focus can be placed on the DNA analysis of non-model organisms, for which genomes can be generated and assembled with much more ease than in the past. The amount of data generated also allows new markers to be used when analysing the DNA of invasive species. NGS allows hundreds of thousands of genomic sites to be interrogated simultaneously, enabling thousands of variable sites to be identified between individuals, giving a much deeper and broader survey of the species than was previously possible.

The higher number of markers afforded by NGS enables a more comprehensive DNA analysis to be performed, as more information from the genome is available. For example, it’s possible to detect much finer-scale population structure, and a more robust picture of invasion routes can be built, because more genomic information is available to feed into the analysis. Further analyses are also possible with an NGS approach. The influence of evolution can be investigated to a narrower degree than with techniques that utilize fewer markers, and it’s much more convenient to examine how environmental conditions cause invasive species to switch on and off particular genes.

Despite the increase in genetic studies however, NGS technology is still underutilised on a large-scale within the field of invasion biology. Moreover, when NGS is applied in invasive biology most studies take an introductory or descriptive role, rather than a more thorough analysis of specific questions. We expect that this currently underutilised resource will be adopted en masse, leading to much more in-depth genomic analyses of many invasive species, addressing a range of evolutionary and ecological questions. This will drive the further use of genetic and genomic studies in invasive species, assisting invasion biologists in understanding and mitigating this major biodiversity conservation problem.

Steven Bourne is a Postgraduate research student within Ocean and Earth Science, National Oceanography Centre Southampton at the University of Southampton.

Steven and Marc join Dr Mark Chapman as co-authors of ‘Applications of next-generation sequencing to the study of biological invasions’, published in Current Zoology.