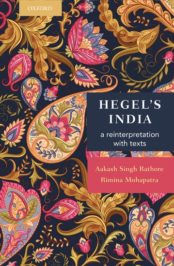 Unlike England, France, Holland, Spain, and Portugal, Germany scarcely enjoyed vast or prosperous overseas colonies. Late to develop its navy, Germany entered into the notorious “scramble for Africa” toward the closing years of the 19th century, and would soon lose (or give away, if the story is true) what it had recently acquired, early on in the 20th century. Prior to the Chancellorship of Otto von Bismarck (who became active in the 1860s), Germany was just not a salient participant in the so-called Europeanization of the earth.

For those powers that were (like England and France), it was quite expected to witness the cultivation and development of new domains of knowledge pertaining to the regions under colonial rule. Where else would we expect an institution devoted to the languages, customs, religions, laws, history, and politics of the various nations of Asia and Africa than right in the metropolitan centre of a great colonial power? The Ecole Spéciale des Langues Orientales of Paris and SOAS in London both make perfect sense. Within this context—the link between colonial power and colonial knowledge—the prominence and dynamic nature of German Indological scholarship was something of an anomaly. It was, more or less, as close as you could get to unmotivated study; scholarship in the pure pursuit of knowledge.

Of course, the drive for just this sort of knowledge didn’t arise in a vacuum. The German fascination surrounding “ancient Indian wisdom” unfolded in parallel with the rising interest in Germany’s own distinctive, pre-Christian past. Another important current, especially with the onset of the 19th century, was a rising prevalence of a sort of synthetic way of thinking; similar to what, in the late 20th century, we began to capture with the corny expression “think global”. By the time the German philosopher who thought most globally, G.W.F. Hegel (1770-1831), was to pen his compendium of all knowledge—the three-volume Encyclopedia of the Philosophical Sciences—synthetic thoughts encompassing all the known globe already reigned supreme among the foremost intellectuals of his time.

Such ideas appeared everywhere: they had aesthetic manifestation as Romanticism; their political manifestation was trans-national socialism; their philological manifestation was the search for an Ursprache (a proto-Indo-European language ultimately linking all great civilizations at a unified cradle or source); and there was, of course, their philosophical manifestation as a quest for absolute knowledge with not merely a universally valid force, but indeed a universally comprehensive source. It was in this vein that the German Indologists so eagerly explored and promulgated whatever morsels of literature or philosophy were available to them from India.

…Hegel treated Indian thought with acerbic contempt, riding roughshod over the subtle distinctions which, during cooler and more contemplative moments, he himself took great pains to tease out, articulate, and explore.

Hegel was himself willy-nilly immersed in this syncretist mood, albeit vectored by his peculiar genius. He had the personal ambition to collect from all corners every worthwhile sundry piece of human knowledge and cultural achievement and to synthesize it all into one resource, which—as mentioned—he would call the Encyclopedia of the Philosophical Sciences. At the centre of the word encyclopedia we observe the term cyclo, circle or cycle. Hegel would consciously use the imagery of the circle as symbolic of the completeness of his philosophical system. And a precondition for this completeness was, of course, a full and robust characterization, evaluation, and placement of ancient Indian wisdom within it.

But what Hegel is most known for today with respect to his appraisal of Indian art, religion, and philosophy is not how much time and energy he devoted to studying and writing about them, but instead his harsh critiques, unkind representations, his rudeness transgressing into outright racism.

Hegel had indeed inherited (and perpetuated) so many of the vices of his era: orientalism, chauvinism, religious bias, pride in the sense of cultural superiority, cruel anti-Semitism—the full gamut. On the other hand, his philosophical bent enjoined repeated engagement with the newly discovered treasures of Indian philosophy, and his irrepressible intellectual hunger and curiosity engendered his wide-ranging study of Indian mythology, history, art, and religion.

On one side, posturing against his intellectual rivals (that is, the German romantics, great champions of Indian wisdom) Hegel treated Indian thought with acerbic contempt, riding roughshod over the subtle distinctions which, during cooler and more contemplative moments, he himself took great pains to tease out, articulate, and explore. And yet that which was most impressive to Hegel about Indian philosophy also posed a deep threat to him. At times it might have struck him that all his thankless, laborious development of a cutting-edge, end-all philosophy, culminated in no more than the very same insights articulated by distant Indian philosophers so many centuries before.

To be sure, Hegel’s relationship to Indology was complicated. Using another contemporary expression, it could quite accurately be epitomized as a love-hate relationship.

Speaking of the hate moments, many of Hegel’s prejudices and contemptuous pronouncements appear shameful to us nearly two centuries on. But to turn the tables, you might ask yourself how our own self-righteousness might appear to Hegel: for under our watch, at even the best universities in the Anglophone world, students are graduated with degrees in philosophy without ever having heard the names or basic concepts of major philosophers or philosophical systems that arose in traditions ostensibly beyond the horizon of our own. “Ostensibly” beyond, because, as Hegel illustrated, we are actually free to determine for ourselves where we would like that horizon to lie. Professional contemporary philosophers in the Western world have preponderantly drawn the boundary, physically and metaphysically, in a manner even more retrograde and rigid than Hegel’s own.

Aakash Singh Rathore is Visiting Professor in the School of Social Sciences at Jawaharlal Nehru University, New Delhi. He is Director of the International Research Network for Religion and Democracy and Series Editor for the Oxford University Press Book Series Religion and Democracy: Reconceptualizing Religion, Culture and Politics in a Global Context.

Rimina Mohapatra is Publishing Manager for Routledge India. She completed her undergraduate and postgraduate degrees in philosophy from St. Stephen’s College, New Delhi and an M.Phil in philosophy from the University of Delhi. She was Junior Specialist at the Department of Philosophy, University of California, Santa Cruz. Her publications include Reading Hegel: The Introductions.