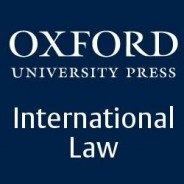 Oxford University Press is a leading publisher in international law, including the Max Planck Encyclopedia of Public International Law, latest titles in the field, and a wide range of law journals and online products. We publish original works across key areas of study, from humanitarian to international economic to environmental law, developing outstanding resources to support students, scholars, and practitioners worldwide. For the latest news, commentary, and insights follow the International Law team on Twitter @OUPIntLaw and Facebook.

This year seems to have packed in more news events and shocking developments than any other in recent memory. As 2016 draws to an end, many are fearful of how the political trends that surfaced this year will play out and what their long-term effect will be on the international legal order. At the same time, the year has seen a number of successes in international law, most notably in judicial decisions that championed the rule of law against the interests of powerful states and corporations. This post highlights and discusses ten international law victories and failures in 2016.

In February, the International Court of Justice heard a case brought by the Marshall Islands against a number of states in possession of chemical weapons, asking the Court to find these states in violation of their obligation to negotiate in good faith for the elimination of these weapons. The Marshall Islands are an apt applicant because of the 67 nuclear tests the US notoriously conducted there in the 1940s and 50s. In the end, the case was dismissed by the Court on the basis of the Marshall Islands’ failure to raise the dispute with the defending states before starting judicial proceedings (a reason found overly formalistic by some commentators). Still, this keeps the door open for future claims either by the Marshall Islands or other states.

When future generations look back on 2016, it is likely to be the war crimes and genocide committed in Syria, rather than Brexit or Trump, that stands out as the year’s most terrible and toxic legacy. It is depressing that there is no realistic prospect of prosecuting any of those involved at the international level, though some countries, including Germany, are putting those present on their territories on trial for crimes committed in Syria. Evidence has steadily been collected by the Commission for International Justice and Accountability, which may in turn lead to prosecutions if the political will materializes.

Turn away from ‘mega-regional’ trade deals

Last year’s blog post heralded the negotiation and adoption of big regional trade deals like the TPP, TTIP, and CETA. This year saw the tide move decidedly in the other direction. CETA, the big trade deal between the EU and Canada, was rescued in the nick of time after a recalcitrant regional parliament nearly derailed the whole enterprise. The TTIP and especially the TPP however now look dead in the water after US President-Elect Trump’s commitment to abandon the first and withdraw from the second. With little sign of interest in reviving the WTO’s Doha Round, trade liberalization looks likely to either stall or be rolled back.

The second half of the year started well for the ICC with the first ever conviction for attacking cultural heritage, after a guilty plea from Ahmad Al Faqi Al Mahdi. Al Mahdi was sentenced to nine years in prison for his part in the destruction of century-old shrines in Timbuktu. Barely a month later, South Africa, Burundi, and Gambia announced their decisions to leave the Court. It remains to be seen whether this heralds an African exodus, but tensions over the Court’s perceived anti-African bias and its arrest warrant for Sudan’s head of state Al-Bashir run high. The ICC’s Prosecutor is preparing an investigation into war crimes in Afghanistan, including those allegedly committed by the US, so 2017 promises more controversy.

In June, the UN Human Rights Committee issued a decision on a very contentious issue: Ireland’s abortion ban. The case was brought by a woman who was forced to travel to the UK to terminate her pregnancy after her foetus was diagnosed with a fatal abnormality. The Committee found that, as the baby had no chances of survival, there were no rights to balance and the denial of a termination and appropriate after-care constituted cruel, inhuman or degrading treatment and was discriminatory. The Irish government has since offered the claimant €30,000 in compensation and will start consultation next year on any changes to its abortion law and constitution.

The UK votes for Brexit

The UK’s Brexit vote has thrown up a whole host of interesting questions not only of constitutional and EU law, but also of international law. To what extent can the rights of existing EU migrants be reversed once the UK leaves the EU? Are EU states allowed to start requiring visas for British visitors? Can the UK start trade negotiations while still going through the Article 50 withdrawal process? Could the UK leave the EU even without going through the Article 50 procedure? All of these questions are highly contentious and may end up before the courts, giving some credence to the claim that the real victors of Brexit are the lawyers.

A win against tobacco

In July, an arbitral panel ruled on a case brought by Philip Morris against Uruguay for its efforts to remove branding from tobacco packaging and increase the size of health warnings. The panel found that Uruguay’s measures were a valid exercise of its power to protect public health and dismissed Philip Morris’ claims. The arbitration fits into a wider debate on investors’ attempts to block or receive compensation for public health legislation which affects the value of their investment. Increasingly, arbitrators are ruling in favour of the states enacting this legislation.

Also in July, the arbitral panel dealing with The Philippines’ claim against China’s self-proclaimed maritime zone in the South China Seas surprised the international law world by handing down an award that was much more critical of China’s actions than expected. The Tribunal found no basis in history or law for China’s ‘nine-dash-line’ and concluded that it therefore cannot possibly have sovereignty over some of the disputed territory, making its enforcement actions in these areas unlawful. Commentators predicted a serious Chinese backlash and a sharp increase in tension, but this has thankfully failed to materialize (yet).

Two very different disputes put a spotlight on sovereign and personal immunity in 2016. The first is France’s ongoing prosecution of Equatorial Guinea’s Vice-President (and son of the President) Teodore Obiang Mangue for corruption and money laundering. Equatorial Guinea filed a case at the International Court of Justice to try and stop the French proceedings. Meanwhile, the US Congress overrode a Presidential veto and passed the Justice Against Sponsors of Terrorism Act, which removes sovereign immunity in terrorism-related civil suits. The Act could be seen as a success in the fight to end impunity for acts of terrorism, but it is widely considered to violate customary international law and many states are alarmed about this attack on one of international law’s foundational principles.

The turn away from international law

It would be impossible to finish this overview without saying something about the turn to populist, isolationist politics in countries from the Philippines to the US and the UK, with strong movements in many other countries. For many international lawyers, it feeds into a concern that many of the world’s major countries are moving away from international law and careful diplomacy as a means of regulating international relations and creating a more peaceful world order. At times, it appears that large groups of the public are not just indifferent to these efforts, but are hostile to them. There are no easy answers, but these times call for reflection and re-engagement. Let us hope that 2017 brings more good news.

Are there any important developments we have missed? Get in touch with us on Twitter or Facebook to continue the debate.