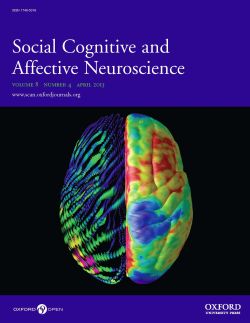 Social Cognitive and Affective Neuroscience (SCAN) provides a home for the best human and animal research that uses neuroscience techniques to understand the social and emotional aspects of the human mind and human behavior.

Individuals with autism spectrum disorder (ASD) experience tremendous social difficulties. They often fail to take turns in conversations and have a hard time maintaining and understanding age-appropriate relationships such as being in love, or having a friend. On top of that, many individuals with autism are over- and/or under-sensitive to sensory information. Some feel overwhelmed by busy environments such as supermarkets; others dislike being touched, or are less sensitive to pain.

Theories trying to understand the core problems of autism have focused mainly on either social difficulties or on sensory problems related to the spectrum. Social theories have claimed that individuals with autism may have a ‘broken’ mirror neuron system for instance, suggesting that they don’t process or ‘mirror’ movements of others in brain areas designated for processing own movements. Sensory theories have for example claimed that people with autism primarily focus on details or are more sensitive to the natural variability inherent to sensory information. However, so far our understanding of how sensory difficulties relate to social-cognitive problems is relatively poor. This is remarkable, because in fact everything we know about other people comes through our senses. If sensory processes are altered in the brain of individuals with autism, it may affect the way they understand others. In this respect, it will not come as a surprise that surveys have found strong associations between the severity of everyday sensory problems experienced by individuals with autism and their actual social difficulties.

Yet, of all senses affected in autism, altered touch processing is the strongest predictor of social difficulties. Why is this the case? Researchers of Ghent University (Belgium) think this may have to do with the important role of touch when distinguishing between self and other. Distinguishing between self and others based on vision or audition proves quite difficult; what you see or hear when someone else is making a movement is quite similar to what you see or hear when making this movement yourself. This stands in contrast with the sense of touch. When performing an action that leads to a tactile sensation, you expect to feel a tactile sensation that corresponds to this observation. If your own touch tells you something else, the tactile sensation you see will probably belong to another person and not to you. The brain can thus understand others by signaling observed tactile sensations that do not correspond to the own sense of touch, the researchers reasoned. If, in contrast, the brain of individuals with autism would fail to signal observed tactile sensations that do not correspond to felt touch, this may explain at least parts of their social difficulties.

This process was significantly altered in the brain of adults with autism, as compared to that of a matched control group. A second study, published in September 2016, showed that the brain of adults with high functioning autism signaled to a much lesser extent when an observed touch sensation consequent to the action of a human hand did not correspond to own touch. While these individuals did not show diminished processing of others’ actions per se, the results contrast claims that these individuals had a “broken” mirror system. Rather, the findings suggest that the brain of individuals with ASD may determine less well whether or not observed touch belongs to the movements of someone else, necessary for distinguishing between self and others on the basis of touch. Remarkably, those individuals with high functioning autism that had reported more severe sensory issues showed a stronger disturbance of the neural process, and expressed stronger social struggles in daily life.

It is the first time that a link could be identified between the way individuals with autism process tactile information in their brain, and their social difficulties. The findings may thus denote a novel and crucial theoretical link between sensory and social difficulties in autism. It is however, too early to formulate recommendations for the clinical field on the basis of this explorative study. The results should first be replicated in other samples, such as (young) children with autism. The outcomes primarily lead to a better understanding of the complex disorder, and of associated difficulties: indeed, the sense of touch may play a more crucial role in the autism spectrum than previously thought.

Eliane Deschrijver, Roeljan Wiersema, and Marcel Brass are the authors of the studies “The interaction between felt touch and tactile consequences of observed actions: an action-based somatosensory congruency paradigm” and “Action-based touch observation in adults with high functioning autism: Can compromised self-other distinction abilities link social and sensory everyday problems?”, both published in Social Cognitive and Affective Neuroscience (SCAN).

Eliane Deschrijver, psychologist, is currently a PostDoc at University of Leuven (Belgium). In her doctoral dissertation, defended in May 2016 at Ghent University (Belgium), she examined self-other distinction processes based on motor and tactile processes within the autism spectrum.

Roeljan Wiersema, psychologist, is Professor at the department of Experimental Clinical and Health Psychology of Ghent University. His research concerns neurocognitive approaches to developmental disorders, including ASD.

Marcel Brass, psychologist, is Professor at the department of Experimental Psychology of Ghent University and head of the lab. In his research he focuses on the link between motor and social cognition, investigating the neurocognitive mechanisms underlying imitation, Theory of Mind, and sense of agency.

How the mindful brain copes with rejection