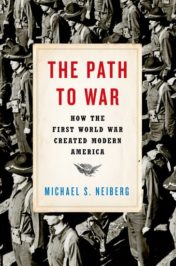 The Path to War: How the First World War Created Modern America

By 1917, Americans increasingly became more concerned about the possible implications that would come with a German victory. With at-home values in mind, the United States presented propaganda to use as a call to action. For the first time ever, whole nations were involved in combat, and not merely professional armies. This medium was used to dehumanize the enemy and portray the growing hatred against them.

In order to convince the masses that there was a just cause behind the brutal and bloody conflict, propaganda was utilized, not only a means to gain cooperation from countries that remained neutral, but also to increase support of current allies, maintain people at home informed, and influence their opinion about the war. The following slideshow portrays images of WWI propaganda used in the United States:

Featured image credit: American soldiers on the Piave front hurling a shower of hand grenades into the Austrian trenches by Sgt. A. Marcioni. Public Domain via Wikimedia Commons.

Michael S. Neiberg is the inaugural Chair of War Studies in the Department of National Security and Strategy at the United States Army War College. His published work specializes on the First and Second World Wars, notably the American and French experiences. He is the author of many books, including Dance of the Furies: Europe and the Outbreak of World War I, Potsdam: The End of World War II and the Remaking of Europe, and The Path To War: How the First World War Created Modern America. He is currently based in Pennsylvania.

Marissa Lynch is a Marketing Assistant at Oxford University Press.