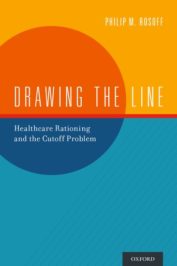 Drawing the Line: Healthcare Rationing and the Cutoff Problem

Under the Affordable Care Act (ACA, or “Obamacare”) millions of Americans were able to buy commercial health insurance and millions more who were fortunate to live in states that elected to expand Medicaid were enrolled – sometimes for the first time in their lives – and gained access to subsidized healthcare. To be sure, the ACA was far from perfect: its haphazard implementation, the failure of the tax penalties to enforce mandated insurance purchasing amongst the young and healthy leading to skewed and potentially collapsing insurance markets, and the Supreme Court’s decision to vacate the requirement to increase the Medicaid rolls, all led to not enough people being covered and the return of inexorably rising healthcare costs. But it certainly was an improvement over what we had before 2010, especially for those people without employer-provided (actually subsidized) insurance and those adults who couldn’t afford to buy their own coverage. It was not what many others and I would have wanted: a universal, generous, single-payer healthcare system. Yet it was a start. Even so, with the election of Donald Trump as the 45th President of the United States, all of that is in jeopardy.

While it is difficult to gauge what the new President will actually do, he appears to be amenable – at least for now – to retaining some of the more popular parts of the ACA, especially the provision to prevent insurers from discriminating against people with so-called pre-existing conditions and that which enables parents (mostly those with insurance via their employers) to keep their adult children on their policies up to the age of 26. However, as pointed out by Jonathan Gruber in a piece in the New York Times, keeping the pieces that people like and jettisoning those that Trump and his allies don’t care for could result in a situation both economically and medically worse than existed pre-ACA.

More important, from my perspective, is the moral dimension to all of these proposals. Retreating from Obamacare, as imperfect as it is, would represent a failure to demonstrate care for the most vulnerable amongst us. It is indeed bitterly ironic that the people empowered with making decisions for the powerless are those who are abundantly supplied with resources, including generous health insurance. That they would take away something that so many have grown to rely upon to keep them healthy and out of abject poverty from medical debt, seems both unfair and cruel. While we have a long history in this country of blaming the poor for being poor, assuming their impoverishment is a sign of personal moral failing, it is more often than not simply bad luck, including the kind of being born into the wrong family or the wrong state, or having the wrong color skin or the wrong ethnic heritage. Good healthcare has the capacity to lift people up because it can maintain and restore the ability to seek the good in one’s life, whether it is to raise a family, get and hold a job or go to school, all pursuits that can contribute – not take away from – the fruitfulness of this country.

It is no secret that I am a firm advocate of creating a single-payer, universal healthcare system that embraces sensible rationing (I have written extensively about this). I have also been a critic of the ACA from the beginning because of its limited ambitions and the compromises that were required to enable its passage by Congress. Now, I am not a Panglossian fool; I fully understand the sausage-making required to get legislation enacted, especially in these poisonous political times. But I suspect the payoffs to the insurance, pharmaceutical, hospital, and doctor industries could have been crafted in such a way to not only earn their lack of objection but even endorsement of substantive change. Yet, even if my hope is not to be fulfilled by Trump, it would be nice if he could think a little bit more of the millions who would be affected by the outright repeal of the ACA and have sympathy for them. He would not suffer; he’s rich (and, as of 20 January 2017 he will get a great government-funded health insurance plan). But many of those much less fortunate than him (and me) will. And they will do so unnecessarily. Noblesse oblige, Mr. President-elect. Noblesse oblige.

Dr. Philip M. Rosoff is Professor of Pediatrics and Medicine at Duke University Medical Center. He is a Resident Scholar of the School of Medicine's Trent Center for Bioethics, Humanities & History of Medicine. He chairs Duke Hospital's Ethics Committee. He has had a long-standing interest in the intersection between clinical ethics and healthcare policy, especially in the setting of scarce resources. He is the author of Drawing the Line: Healthcare Rationing and the Cutoff Problem.