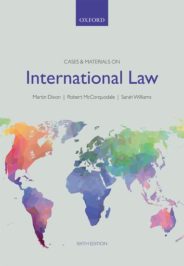 Corporations are now widely seen as having responsibilities in regard to human rights abuses. This was thrown starkly onto the front pages recently when a number of high profile UK companies, including M&S and Asos, were caught up in allegations of child refugees from Syria working in very poor conditions for clothing suppliers based in Turkey. They are just one of many instances around the world where corporations have been shown to be involved in human rights abuses.

Corporations have a responsibility to respect human rights.

While the corporation’s responsibility may not necessarily lead to legal liability, there have been a range of developments at national, regional and international levels, which show where it is headed. For example, the UK introduced the Modern Slavery Act in 2015, which requires any company with annual turnover of £36 million or more (US$43 million) to produce yearly report on what steps it is taking to prevent slavery and human trafficking in any part of its business and supply chain wherever in the world. In March 2016, the Council of Europe issued Recommendations on Human Rights and Business, which require member states to apply measures which ‘encourage or, where appropriate, require’ mandatory human rights due diligence of companies domiciled or conducting substantial activities within their jurisdiction. There have also been a range of cases in Canada, The Netherlands, the UK and the US, which have shown a willingness by courts to extend the duty of care of parent companies for actions of their subsidiaries.

The need for companies across all industry sectors to do genuine, focused human rights due diligence is becoming ever clearer. However, research by the British Institute of International and Comparative Law and law firm Norton Rose Fulbright has uncovered some worrying findings that show many companies still aren’t doing enough to tackle the issue properly. The extensive report was the result of surveying over 150 companies around the world. It found that only 51 per cent undertook a dedicated human rights due diligence assessment which encompassed the full range of a company’s human rights obligations.  The rest relied on catching human rights issues within other, more general due diligence.

Not undertaking human rights due diligence processes has risks for the company: reputational, financial, operational and legal. A picture or comment on social media from a local group far from the company’s headquarters can transform a company’s reputation very quickly. By the time the awareness of human rights risk reaches the board level, it is often too late to apply a preventative approach. In order to ensure the effectiveness of the human rights due diligence process, human rights impacts have to be recognised on the operational level, where the interaction with the rights-holders take place: on the factory floor; the construction site; the overseas operations; in the laboratory; and when supplies are procured.

Ignorance of human rights abuses is no defence. Companies will not only be liable for those human rights impacts of which they had knowledge, but also for what they ‘ought to have known’, had they been diligent. All human rights are potentially at risk of violations by corporations. The increase in regulation and litigation, including in regard to the actions of parent companies, increase the overall business risk to companies.

The direction of legal developments in this area is clear: human rights scrutiny is only going to intensify, and the human rights performance of companies is becoming an increasingly important corporate issue. It will also increasingly be part of international law.