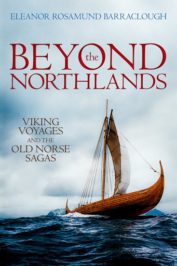 The medieval Norse were adventurous travellers: not only raiders but also traders, explorers, colonisers, pilgrims, and crusaders. Traces of their trips survive across the world, including ruined buildings and burials, runic graffiti, contemporary accounts written by Christian chroniclers and Arab diplomats, and later sagas recorded in Iceland. Their adventures spanned from New Foundland to Baghdad, and many other countries in between.

In this interactive map, you can follow the trail of the vikings to far-flung lands, with some possibly surprising results.

Featured image credit: “Guests from Overseas” by Nicholas Roerich, from the series “Beginnings of Rus’. The Slavs.” 1901. Public domain via Wikimedia Commons.

Eleanor Rosamund Barraclough is a Lecturer in Medieval History and Literature at Durham University. In 2013 she was chosen as one of ten BBC Radio 3 New Generation Thinkers, in a competition to find young academics with the potential to turn their research into programmes for broadcast. Eleanor's research often takes her to the chilly Nordic climes of Scandinavia, Iceland, and Greenland. Whilst researching this book, Eleanor had many far-flung adventures of her own: bumping along on the back of an Icelandic horse whilst exploring Norse ruins in Greenland, sailing ice fjords under the midnight sun with a caribou hunter, and searching for Norse rune-stones in Sweden. Her proudest moment came when travelling across Arctic Norway, where she was knighted with a walrus penis bone in Hammerfest and became a member of the Royal and Ancient Polar Bear Society. She is the author of Beyond the Northlands (OUP, 2016).

The reconversion of Hagia Sophia in perspective