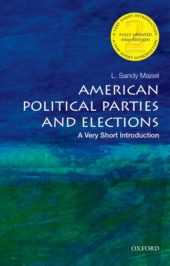 Following the recent US Presidential election, we have curated a reading list with resources that provide insight into the politics behind the 2016 election, and look at the key topics that stimulated some of the major debates from the election season. We have selected books and other resources that detail American politics in the context of this election and investigate the issues that influenced the campaigns.

We explore content that relates to American political parties, voting history in the US, and election trends:

These titles grapple with topics including issues with democracy, activist groups, and organized political movements:

Digital media has a powerful influence on elections and campaigns. Investigate the relationship between campaigns and the internet, how civic involvement has changed, and the effect media have on voting and identity:

Are voters generally uninformed? What factors influence our decisions when voting? These titles deal with questions relating to voting influences on the individual and questions where to go from here:

What are voting trends and how are they formed? Below are titles that investigate group identities throughout America and how voting is impacted:

Erin Cavoto is a Marketing Assistant at Oxford University Press.

A guide to the APSA 2018 conference