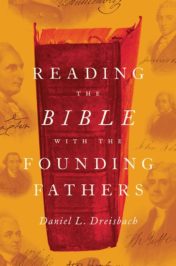 Reading the Bible with the Founding Fathers

In the midst of political campaigns, including the last election season, one often hears appeals to the American founding principles and the political visions of the founding fathers.

Which political traditions and thinkers shaped the ideas and aspirations of the American founding? Late eighteenth-century Americans were influenced by diverse perspectives, including British constitutionalism, classical and civic republicanism, and Enlightenment liberalism. Among the works frequently said to have influenced the founders are John Locke’s Two Treatises of Government, Montesquieu’s The Spirit of the Laws, and William Blackstone’s Commentaries on the Laws of England.

Another, often overlooked or discounted source of influence is the Bible. Its expansive influence on the political culture of the age should not surprise us because the population was overwhelming Protestant, and it informed significant aspects of public culture, including language, letters, education, and law. No book at the time was more accessible or familiar than the English Bible, specifically the King James Bible. And the people were biblically literate.

The discourse of the era amply documents the founders’ many quotations from and allusions to both familiar and obscure biblical texts, confirming that they knew the Bible from cover to cover. Biblical language and themes liberally seasoned their rhetoric. The phrases and cadences of the King James Bible influenced their written and spoken words. Its ideas shaped their habits of mind and informed their political experiment in republican self-government.

The Bible left its mark on their political culture. Following an extensive survey of American political literature from 1760 to 1805, political scientist Donald S. Lutz reported that the Bible was cited more frequently than any European writer or even any European school of thought, such as Enlightenment liberalism or republicanism. The Bible, he reported, accounted for approximately one-third of the citations in the literature he surveyed. The book of Deuteronomy alone is the most frequently cited work, followed by Montesquieu’s The Spirit of the Laws. In fact, Deuteronomy is referenced nearly twice as often as Locke’s writings, and the Apostle Paul is mentioned about as frequently as Montesquieu.

Many in the founding generation–98% or more of whom were affiliated with Protestant Christianity–regarded the Bible as indispensable to their political experiment in self-government. They valued the Bible not only for its rich literary qualities but also for its insights into human nature, civic virtue, social order, political authority and other concepts essential to the establishment of a political society. The Bible, many believed, provided instruction on the characteristics of a righteous civil magistrate, conceptions of liberty, and the rights and responsibilities of citizens, including the right of resistance to tyrannical rule. There was broad agreement that the Bible was essential for nurturing the civic virtues that give citizens the capacity for self-government. Many founders also saw in the Bible political and legal models–such as republicanism, separation of powers, federalism, and due process of law–they believed enjoyed divine favor and were worthy of emulation in their polities.

The political discourse of the founding, for one example, is replete with appeals to the Hebrew “republic” as a model for their own political experiment. In an influential 1775 Massachusetts election sermon, Samuel Langdon, the president of Harvard College and later a delegate to New Hampshire’s constitution ratifying convention, opined: “The Jewish government, according to the original constitution which was divinely established, … was a perfect Republic … The civil Polity of Israel is doubtless an excellent general model …; at least some principal laws and orders of it may be copied, to great advantage, in more modern establishments.” Most of what the founders knew about the Hebraic republic they learned from the Bible. These Americans were well aware that ideas like republicanism found expression in traditions apart from the Hebrew model, and, indeed, they studied these traditions both ancient and modern. The republican model found in the Hebrew Scriptures, however, reassured pious Americans that republicanism was a political system favored by God.

Focusing on the Bible’s impact on the political culture of the founding is not intended to discount, much less dismiss, other sources of influence that informed the American political experiment. Rather, I contend that casting a light on the often ignored place of the Bible in late eighteenth-century political thought enriches one’s understanding of the ideas that contributed to the founding project.

Does it matter whether the Bible is studied alongside other intellectual influences on the founding? Yes, because biblical language, themes, and principles pervaded eighteenth-century political thought and action. Accordingly, an awareness of the Bible’s contributions to the founding project increases knowledge of the founders’ political experiment and their systems of civil government and law. A study of how the founding generation read and used the Bible helps Americans understand themselves, their history, and their regime of republican self-government and liberty under law.

Daniel L. Dreisbach is a professor at American University in Washington, DC. He has authored or edited 10 books, including Reading the Bible with the Founding Fathers.

Heretics to demigods: evangelicals and the American founders