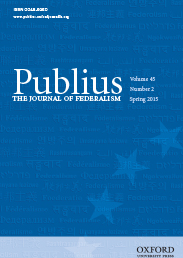 Publius: The Journal of Federalism is the world's leading journal devoted to federalism. It is required reading for scholars of many disciplines who want the latest developments, trends, and empirical and theoretical work on federalism and intergovernmental relations.

Over the last few days, as anyone interested in the American presidential election can tell you – and it seems everyone is –, the 2016 election is one of the few in history with two different winners: one candidate appears to have won the popular vote and the other has won the Electoral College vote. As of this writing, according to the latest tally the popular vote leader is Hillary Clinton by over 337,000 votes. This fact is politically (and perhaps sociologically) important. But it is irrelevant under our constitutional system.

Under the Constitution, the President is the only federal office subject to a special electoral process. There are two steps: first, individual voters register their preferences in the voting booth. The second step, which usually receives far less notoriety, consists of electors from each state designated according to the winner of the statewide popular vote. (Maine and Nebraska are exceptions, as their electoral votes are assigned by the popular vote winner in each congressional district.)

Also in the last few days, there has been reinvigorated discussion of the possibilities of reforming how the Electoral College works, and even whether it should be abolished. This recrudescence of reform of the Electoral College has assumed that there are two paths to reform: a constitutional amendment, or a previously little-known proposal called the National Popular Vote Interstate Compact (NPV). A constitutional amendment would be very difficult to achieve. Of the thousands of constitutional amendments proposed since the beginning of the Republic, only 27 have been ratified. Even if the proponents of an amendment strike while the iron is hot, there is no likelihood a Republican-controlled Congress would vote for altering the Electoral College. That political reality leaves the National Popular Vote proposal as the only apparent reform option.

NPV compact proponents contend the Electoral College can be altered through the constitutional process for interstate agreements, without resort to a constitutional amendment. Other commentators have noted the political problems – How to handle recounts? More plurality winners? Regional candidates? – that might ensue from a popular vote system. I’ll restrict my comments to the legality of the NPV.  In short, the NPV proposal is manifestly unconstitutional. Here’s why.

Proponents claim the NPV will reflect the democratic preferences of the voters much better than the allegedly antiquated Electoral College.

The Constitution’s Compact Claus provides: “No state shall, without the Consent of Congress … enter into any Agreement or Compact with another state.” Some prior interstate compacts have been challenged in the federal courts, and the Supreme Court has held that not all interstate agreements need congressional approval. For example, a compact resolving a state boundary or creating a multistate tax commission does not need Congress’s approval. NPV supporters claim congressional approval is unnecessary.

However, the Court has only allowed compacts that do not penalize non-joining states and do not threaten federal interests or institutions. The NPV compact would fail on both counts. First, the NPV would disadvantage states that refuse to join the compact. For example, low-population states would likely refuse to join because they would be disadvantaged relative to high-population states.  Second, and most importantly in terms of constitutional legitimacy, the express purpose of the NPV compact is to change a federal constitutional institution, the Electoral College. That is, the NPV is trying to reform a constitutional institution – the Electoral College – without going through the amendment process. This fact requires the NPV to be submitted to Congress for approval, per the Compact Clause.

But that’s not the only roadblock for the NPV.

Even if Congress wanted to approve the NPV, it would be unconstitutional to do so. The Supreme Court has held that Congress’s approval of an interstate compact converts the agreement into federal law. Although the Constitution leaves the appointment of electors up to the states – a point NPV proponents repeatedly make – the submission of the NPV compact to Congress puts Congress in the position of approving a measure that Congress would be prohibited from enacting by itself. The Constitution does not allow Congress to create a popular vote system on its own initiative. Therefore, how could Congress approve a state-based plan that does the same?  In short, the NPV compact is unconstitutional because the Constitution does not allow a minority of states, in combination with Congress, to amend the Constitution.

Ian J. Drake is an Associate Professor of Political Science and Law at Montclair State University in New Jersey. His current research examines the constitutional limits to states’ “ag-gag” laws, which seek to curb undercover investigations of the treatment of animals in research and agricultural facilities. He is the author of the article "Federal Roadblocks: The Constitution and the National Popular Vote Interstate Compact."