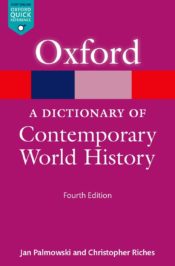 A Dictionary of Contemporary World History

An authoritative dictionary providing informative and analytical entries on the most important people, organizations, events, movements, and ideas that have shaped the world we live in. Covering the period from 1900 to the present day, this fully revised and updated new edition presents a global perspective on recent history.

Over the past 30 years, I have worked on many reference books, and so am no stranger to recording change. However, the pace of change seems to have become more frantic in the second decade of this century. Why might this be? One reason, of course, is that, with 24-hour news and the internet, information is transmitted at great speed. Nearly every country has online news sites (some clearly more partial than others) which give an indication of the issues of political importance; while government websites present a more official view (for example, the North Korean government’s English-language website provides a good case of totalitarianism in action). However, increased knowledge is but a tool. Underlying the change is a number of major themes.

While the first decade of the twenty-first century began with optimism, this quickly faded – perhaps triggered by the consequences of the invasion of Iraq in 2003 and the global financial crisis of 2008 – with regional, economic, and political instability spreading to many parts of the world. From financial meltdown in Iceland to political crisis in Brazil, from the destruction of Yemen to the dysfunctional birth of South Sudan, from the rise of nationalism and of religious fundamentalism, to the weakness of international organizations, the last few years have been riven with crises.

Always a destabilizing influence on the established status of countries, nationalism remains a potent issue. The world’s newest independent country, South Sudan, separated from the rest of Sudan in 2011. But, sadly, the enthusiasm for self-determination as a way of improving the prospects of its citizens quickly descended in to a violent and destructive civil war. There was a real chance that it would have been joined by another new country: Scotland. If Scotland had voted in 2014 to become independent (and it nearly did), it would by now be a sovereign nation. Catalonia’s provincial government is also doing all it can to break away from Spain, not to mention what the consequences of Britain leaving the EU will be (a decision in which nationalistic rhetoric played an important part). There are some remaining anti-colonial movements, such as in New Caledonia, with countries seeking independence from colonial rulers, in this case France. Few regions are in a position to take self-declared action, but Somaliland has, and though not recognized internationally, it is much more stable than Somalia, the country from which it has seceded.

If nationalism has been one force changing the identity of countries, another causing shock waves through the world has been the growing strength of religious fundamentalism, most usually Islamic, but not solely – Hindu fundamentalism is playing an ever-stronger role in multicultural India, for example. However, it is the virtual collapse of a number of Islamic countries (Syria, Libya, Yemen, and Somalia) amidst civil and religious war that pose the greatest challenge. How can one describe the social, economic, and political position of countries where all forms of normal government have collapsed? The consequences of these ‘failed’ states have spread beyond their borders – the flow of refugees from Syria into surrounding countries and then on to Europe, Islamic State attacks in Western Europe, and al-Shabab attacks in Kenya. The growing dislocation of inter-racial and inter-religious relations across the world has  manifested in many uncomfortable ways, from burkini bans on French beaches to a US presidential candidate proposing that Muslims should be banned from travelling to the United States.

As always, economic changes continue to challenge governments. Immediately following the 2008 global financial crisis, it was developed countries and their financial systems that felt the pressure, while the BRIC countries thrived and their demand for raw materials transformed the economies of many small nations – Mauritania for its iron ore, Equatorial Guinea for its oil, Mozambique for its gas and coal. China’s investment in African countries, in order to secure the raw materials it needs, has fundamentally altered the geopolitics of the region. However, as China’s speed of development slowed, so too, did its demand for resources, and the prices of raw materials tumbled. Few countries thought they had joined a natural resources rollercoaster, as their revenues collapsed and their plans and dreams of a secure future imploded before their eyes.

To complete this listing of global woes, the need to contain global warming has brought into sharp focus the difficulties of implementing change that needs to work at a global level through national policies, where domestic politics will tend to promote the self-interest of each individual nation. The Paris talks on combatting global climate change held at the end of 2015 provided new targets for countries to aim at, and change is coming – for example, in just a few years China has become the world’s largest generator of solar power, and its solar panel industry is bringing change to Africa and the Middle East. However, it still remains necessary for the government of Kiribati to buy land in Fiji, to resettle its inhabitants as rising sea levels begin to make their islands uninhabitable.

At least as a partial counter to this litany of problems, significant progress was made towards meeting the Millennium Development Goals – there are fewer people living in absolute poverty and more children are receiving education than in 2000. Maintaining progress amid more turbulent economic times is going to be much harder, with world leaders hoping that new Sustainable Development Goals, agreed in 2015, will assist over the next fifteen years. But progress there has been, and this is something to celebrate amidst the global challenges of nationalism, religious fundamentalism, economic uncertainty, and climate change.

There is certainly no chance of developments slowing down. In just two weeks in September, there were parliamentary elections in the Seychelles, Belarus, Croatia, and Russia, while a new leader emerged in Uzbekistan and a peace agreement was signed between the Colombian government and the FARC rebels after half a century of conflict. As for unpredictable events, well, we will just have to see what happens.

Christopher Riches has worked in publishing for over 30 years, for both Oxford University Press and HarperCollins Publishers. His particular expertise is in reference publishing. He is co-author of the new editions of A Guide to Countries of the World and A Dictionary of Contemporary World History.