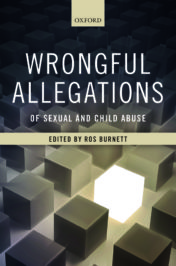 Many people watching the UK television drama National Treasure will have made their minds up about the guilt or innocence of the protagonist well before the end of the series. In episode one we learn that this aging celebrity has ‘slept around’ throughout his long marriage but when an allegation of non-recent sexual assault is made he strenuously denies it. His wife knows about his infidelities and chooses to believe him, but his daughter, who for years has struggled with mental ill-health, substance abuse problems and fractured relationships, seems to be troubled by memories from her childhood. As the episodes unfold, the series gives the audience chance to be judge and jury, employing whatever bits of information are available to them and, not least, their own prior assumptions about such cases.

Reporting of sexual abuse has soared in recent years, boosted by encouragement to ‘come forward’ with assurances of anonymity, developments towards mandatory reporting, and by publicity given to shocking cases. National Treasure is reminiscent of several celebrities pursued under Operation Yewtree from which there have been varied outcomes, and trials of former staff in children’s homes and residential schools for juvenile offenders, as well as of priests, doctors and others whose work has given them access to children and positions of authority. The respectability of their roles is now taken as an extra indicator that allegations are true because they have had the power to exploit those under their authority and to deceive others.

Cases of sexual abuse, especially non-recent cases, are particularly difficult because there is no crime scene or physical trace. In the absence of definitive evidence, the verdict is more likely to be influenced by the impressions made by the accused and the complainants, the relative persuasiveness of the prosecution and defence barristers, and the views that jury members already hold about what typically occurs in such cases. Individual jury members may be more emotionally predisposed to believe one party over the other, following personal experience or empathy with victims of abuse or with victims of wrongful allegations, supported by cultural narratives that they find persuasive, and depending on which form of injustice most enrages them and that they want addressed.

Cases of sexual abuse, especially non-recent cases, are particularly difficult because there is no crime scene or physical trace.

Jimmy Savile too had been described as a ‘national treasure’, as had Rolf Harris, now serving a prison sentence. The case against Savile became the exception to prove the rule that allegations of historical abuse should be believed at the expense of the ‘presumption of innocence until proven guilty’. The avalanche of complaints against Savile was quickly followed by further claims of uncovered historical institutional abuse, implicating senior politicians. True or not, these have served as signal crimes, galvanising moral panics and a political will to address them. Theresa May, then Home Secretary, announced in Parliament,

“I believe the whole House will also be united in sending this message to victims of child abuse.  If you have suffered and you go to the police about what you have been through, those of us in positions of authority and responsibility will not shirk our duty to support you. We must do everything in our power to do everything we can to help you…”

Sir Keir Starmer, then the Director of Public Prosecutions, was critical of an ‘overcautious approach’ in the policing and prosecution of reported sexual offences. Explaining that ‘We cannot afford another Savile moment’ he called for a collective approach and national consensus that

“a clear line now needs to be drawn in the sand and we need to redouble our efforts to improve the criminal justice response to sexual offending.”

The collective remorse for failing to report suspicions or to believe claims of abuse in the past and wanting to recognise and learn from past mistakes has, many argue, led to over-correction and confirmation bias. Believing the victim has become a moral imperative; this includes accepting people as victims on face-value and carrying forward that implication in the treatment of them as witnesses, and as vulnerable, in need of protection. In real life, the celebrity in a National Treasure is more likely to be found guilty given the climate of public opinion. His accusers would be referred to as victim, and as the subject of police enquiries he would certainly experience huge damage to his professional and personal life. If found guilty, such serious offences would warrant a long custodial sentence.

To some extent, raising the spectre of false allegations has become contentious because it involves questioning the credibility and honesty of complainants, and requires them to give evidence that can be experienced as ‘re-victimising’. Cases in which the defendant is found ‘not guilty’ can create cognitive dissonance for victims’ advocates because it requires them to entertain the possibilities that: people may be motivated to ‘come forward’ for various reasons, such as  persuasion by others, the prospect of a new identity as a survivor, and praise for being a brave person whose past failures can be attributed to abuse, or the prospect of financial compensation. Without acknowledging those and other possibilities false allegations can safely be dismissed as rare.

Maybe we also need to make more room for doubt and middle ground in some cases, instead of zealous certainty.

I’m writing this before the final episode of the television drama. Some viewers have suggested that an ambiguous ending would be the brave option, and I agree. Maybe we also need to make more room for doubt and middle ground in some cases, instead of zealous certainty. Researching this subject, I have met many people who claim they have been falsely accused, and while one can make an informed hunch based on detailed facts, narrative and getting to know the character of the person concerned, there are others where one has no idea whether the individual is innocent or guilty. If there is no physical evidence how can we know for sure? There are people who, because they live alone or are non-conformist, like Christopher Jefferies, may become suspects and be wrongly arrested and charged, but unlike the more fortunate Mr Jeffries, they cannot hope for DNA evidence to absolve them.

That black hole for proof of guilt or innocence is central to the tragedy in such cases: that we can never know for sure and the individuals are left under a cloud of suspicion, that they lied, that they did something wicked. There are other cases where we may feel much more confident but can be shown to be wrong: apparent villains may have a heart of gold; respected people in public office may have a private life that is reprehensible or shows hypocrisy. The recent revelations about the private pursuits of Keith Vaz MP and his wife’s unawareness validates arguments that people can have a side to their life or have predilections that those closest to them know nothing about. I’m acutely aware that even acknowledging such instances lays more people open to suspicion if they are accused of such behaviour, making it even more difficult for ‘actually innocent’ people to ever be believed if they are wrongly accused.

It should always be remembered that one case does not fit all. There is also a need for more public recognition of wide differences in types of sexual offences and in the degree of suffering caused, and the folly of lumping all sex offenders together as evil predators who always subject their victims to catastrophic, life-long damage.

Featured image credit: ‘Paparazzi’ by Yahoo. CC BY 2.0 via Flickr.

Ros Burnett is a Senior Research Associate at the Centre for Criminology, University of Oxford. She is the Editor of Wrongful Allegations of Sexual and Child Abuse (OUP, 2016).