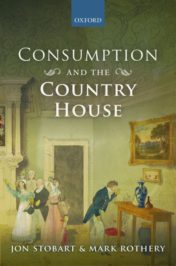 Consumption and the Country House

From every window there were beauties to be seen. The rooms were lofty and handsome, and their furniture suitable to the fortune of their proprietor; but Elizabeth saw with admiration of his taste, that it was neither gaudy nor uselessly fine; with less of splendour, and more real elegance, than the furniture of Rosings (Jane Austen, Pride and Prejudice).

Such were Elizabeth Bennet’s impressions on her visit to Pemberley House with her uncle and aunt, Mr. and Mrs. Gardiner. This was part of their “northern tour” of England, taking in country houses, towns, and landscapes, a popular pastime in Austen’s time. Writing as they travelled these people, often women such as Lybbe Powys, recorded their impressions of the taste and refinement (or lack thereof) reflected in the rural mansions they encountered.

In many ways country house visiting was, in Georgian England, what it is now – a glimpse at wealth and all its associated finery, a peek into the lives of the rich and famous, into the architecture, and formal gardens that only those people could afford. It was a way for the aristocracy to display their power, taste, and refinement. Visitors, then and now, were restricted in the areas of the house they could enter and guided around the spaces of the house, carefully schooled as they went in the meaning and significance of the objects they saw. From the 1760s some houses, such as Stowe House and Blenheim Palace, even printed guidebooks for visitors.

Now, of course, it is a glimpse at a past world when yawning oceans lay between rich and poor, and in which privilege and rank were ascribed according to birth. This was a world far removed from the principles, if only barely the reality, of the modern. In Georgian England the power of the aristocracy and gentry was only infrequently questioned, and then only by the most radical of radicals. Fun could be poked at the social hierarchy, questions could be asked, as Austen did, but the reality was largely inescapable.

Why then, given all the changes since Jane Austen’s time, does the country house’s appeal endure given how difficult many of us presumably find the hierarchies that underpinned them? Again we find both change and continuity. Power can be intoxicating, both for the Georgians and for us. Country houses were ‘power houses,’ emanating authority and influence. There was, and is, a sense that their owners ‘shaped’ the world around them. They were also ‘social houses,’ centres of sociability for local elites and social climbers. We visualize dances and lavish meals through period dramas but these events probably also played out in the minds of Georgian visitors as they wandered through ballrooms and dining rooms. Perhaps most of all they contained the glittering prizes of wealth, objects evoking foreign worlds. Rare and untouchable commodities were these to the Georgians, but so too are they now, ‘national treasures’ speaking of Britain’s history.

Perhaps the real change has been the way that country houses have become part of English ‘national identity’ and part of the ‘national heritage,’ a notion that would have been unfamiliar to the Georgians. To them, country houses were private family homes, part of the ‘private interest’ of their owners momentarily flung open for discerning visitors. Only in the nineteenth century, at the birth of ‘heritage,’ were country houses woven into the ‘national history’ of England and even then only tentatively so. In fact, our perception of the country house as ‘national heritage’ is largely a product of post war Britain. Emptied of their owners and no longer targets for political attack, country houses were acquired by agencies such as the National Trust for the benefit of the ‘nation,’ in effect ‘nationalised’ and ‘owned by us.’ The twitter bio for Stowe House reflects this new outlook:

“Built as a pleasure palace by the Dukes of Buckingham & Chandos. Now owned by the Stowe House Preservation Trust and opened for the public to enjoy.”

We should, of course, ask some probing questions about the way this process of nationalization formed a kind of ‘welfare state’ for the aristocracy. But the political tone of democratization is clear. A far wider section of today’s population will have seen the interior of Stowe than in the eighteenth century when Sophia Newdigate the wife of Sir Roger Newdigate of Arbury Hall, in Warwickshire, visited the house in 1750 and noted these observations in her travel journal:

“There are two noble apartments newly built…a drawing room furnished with Crimson velvet and hung with whole lengths of all ye Grenville family.”

Although the emptying of the wealthy occupants of country houses brought them into the ownership of heritage organisations, it also brought challenges. How can they attract visitors who have little interest in Rembrandts or japanned furniture to make lengthy journeys to uninhabited houses? In recent years the response has been innovative. Art history has become social history, country houses have become lived spaces again as owners have attempted to re-animate them. The focus has shifted from the aristocracy to the servants, the everyday tasks they performed to keep the house running. I recently attended a dramatization, staged by the pupils of Broadclyst Community Primary School, of Lloyd George’s 1925 speech on land nationalisation at Killerton House, the former home of the Acland family in Devon. The audience met the family in the sitting room, the gardeners in the grounds, the laundry maids singing in the laundry and the butlers greeting Lloyd George as he approached the house. Then they heard his speech on the need for land to be brought into public ownership. This was a fascinating journey for the visitors and a valuable experience of ‘lived history’ for the children. In a society in which ‘national identity’ should focus on democracy and equality, agencies reflecting our ‘national heritage’ should be helping to tell the broader history of country houses. So too should historians, from the glittering to the seemingly mundane.

Mark Rothery is Senior Lecturer in History at the University of Northampton. He is the co-author of Consumption and the Country House.