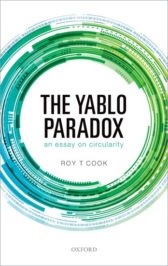 Roy T Cook examines the Yablo paradox--a paradoxical, infinite sequence of sentences, each of which entails the falsity of all others that follow it. He focuses on questions of characterization, circularity, and generalizability, and pays special attention to the idea that it provides us with a semantic paradox that involves no circularity.

Before looking at the person-less variant of the Bernadete paradox, lets review the original:

Imagine that Alice is walking towards a point – call it A – and will continue walking past A unless something prevents her from progressing further.

There is also an infinite series of gods, which we shall call G1, G2, G3, and so on. Each god in the series intends to erect a magical barrier preventing Alice from progressing further if Alice reaches a certain point (and each god will do nothing otherwise):

(1) G1 will erect a barrier at exactly ½ meter past A if Alice reaches that point.

(2) G2 will erect a barrier at exactly ¼ meter past A if Alice reaches that point.

(3) G3 will erect a barrier at exactly 1/8 meter past A if Alice reaches that point.

Note that the possible barriers get arbitrarily close to A. Now, what happens when Alice approaches A?

Alice’s forward progress will be mysteriously halted at A, but no barriers will have been erected by any of the gods, and so there is no explanation for Alice’s inability to move forward. Proof: Imagine that Alice did travel past A. Then she would have had to go some finite distance past A. But, for any such distance, there is a god far enough along in the list who would have thrown up a barrier before Alice reached that point. So Alice can’t reach that point after all. Thus, Alice has to halt at A. But, since Alice doesn’t travel past A, none of the gods actually do anything.

Some responses to this paradox argue that the Gods have individually consistent, but jointly inconsistent intentions, and hence cannot actually promise to do what they promise to do. Other responses have suggested that the fusion of the individual intentions of the gods, or some similarly complex construction, is what blocks Alice’s path, even though no individual God actually erects a barrier. But it turns out that we can construct a version of the paradox that seems immune to both strategies.

And so on. In short, for each natural number n:

Now, what happens when p approaches B?

Particle p’s forward progress will be mysteriously halted at B, but p will not have impacted any of the barriers, and so there is no explanation for p’s inability to move forward. Proof: Imagine that particle p did travel to some point x past B. Let n be the largest whole number such that 1/2n is less than x. Then p would have travelled at a constant speed between the point ½n+2 meter past B and 1/2n meter past B during the period from ½n+2 second past midnight and 1/2n second past midnight. But there is a force-field at 1/2n+1 meter past B for this entire duration, so p cannot move uniformly from ½n+2 meter past B and 1/2n meter past B during this period. Thus, p is halted at B. But p does not make contact with any of the force-fields, since the distance between the mth force-field and p (when it stops at B) is 1/2m meters, and the mth force-field does not appear until 1/2m+1 second after the particle halts at B.

Thanks go to the students in my Fall 2016 Paradoxes and Infinity course for the inspiration for this puzzle!