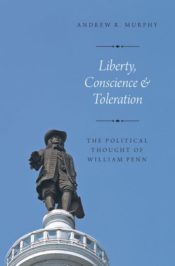 Liberty, Conscience, and Toleration: The Political Thought of William Penn

The two defendants had been arrested several weeks earlier while preaching to a crowd in the street, and charged with unlawful assembly and creating a riot. Their trial, slated to begin on 1 September, had been pushed back to 3 September after preliminary wrangling between the judge and the defendants. And so on this date – 246 years ago today – the defendants were called before the bench. They were an unlikely pair, in some ways: the firstborn son of an English knight and naval hero, a month shy of his twenty-sixth birthday, who had studied at (and been ejected from) the most prestigious college in England; and a wealthy London merchant, sixteen years his senior. But by the end of the year, due in large part to the events of the next two days, William Penn and William Mead would become leading spokesmen for the Society of Friends (Quakers) and nationally-known figures in the movement for liberty of conscience, representative institutions, and the rule of law.

The trial was contentious before it even began: as they approached the bench on the morning of 3 September, Penn and Mead found themselves fined for refusing to remove their hats before they had even spoken a word. (Quakers considered doffing the hat to mere humans inappropriate, a gesture that deprived God of the ultimate honor due Him.) During the proceedings, Penn continually objected that the charges were unjust and contrary to English law; he was eventually ejected from the courtroom altogether. Mead continued to object until he, too, was ejected. Despite repeated threats from the judge, and despite being denied food and a toilet all night (at least according to the defendants), the jury found Penn and Mead not guilty, whereon its members were fined for refusing to convict. Penn and Mead, though acquitted, were returned to jail on contempt charges stemming from their refusal to remove their hats at the outset of the trial. Penn’s release came a week later, his fines paid by family or friends so that he could be home with his dying father.

What followed after the trial is arguably as important as what happened during the trial. A purported transcript – entitled The Peoples Ancient and Just Liberties Asserted – appeared shortly after the conclusion of the trial and went through nine printings in the last three months of 1670 alone (with additional printings in 1682, 1696, 1710, and 1725). Though it is a transcript of sorts, Peoples’s presentation of Penn and Mead is clearly a stylized and heroic construction, a morality play in dramatic form, complete with stage directions and narrative insertions, aimed at presenting the defendants as courageous Dissenters railroaded by a persecuting state-church system. It is a work of political theory and political theater that articulates a politics of dissent against arbitrary authority, of clear written law against prosecutions built on vague charges, and of juries as defenders of popular liberties against power-hungry judges. Its publication and ensuing popularity marked William Penn’s emergence as a new voice in the world of English Dissent.

The early modern courtroom was a far cry from our contemporary version of that institution, and it lacked many modern “hallmarks” like the presumption of innocence, exclusion of hearsay evidence, guarantees of defense counsel, the burden of proof on the prosecution, defendants’ right to silence. The judge in the case was none other than Sir Samuel Starling, the Lord Mayor of London. Verbal abuse was part and parcel of the court’s interactions with the defendants. “You are a saucy fellow,” the court Recorder told Penn, at other times calling him “impertinent,” “pestilent,” and “troublesome.” Mead too was berated by the court, with the Lord Mayor insisting, “You deserve to have your tongue cut out.” On the other hand, the guarantee of jury trials was a key element of British common law, dating back to Magna Carta. Although the charge against Penn and Mead was not explicitly religious in nature, the two made the fact that their “riot” was actually a religious assembly a central theme of their defense. In the end, the defendants turned a common law indictment for disturbing the peace into a wholesale attack on the persecuting English church-state, which violated the rights of conscience and branded pious believers as criminals.

Although they lost in the courtroom in September 1670, Penn and Mead emerged as leading figures in English politics over the next three decades: Mead as a prominent Quaker spokesman, Penn as the founder of an American colony dedicated to the principles of religious toleration. The Penn-Mead trial is commonly cited as among the most significant in the Anglo-American tradition, although many of these accounts admit that the significance of the case was due less to the two 1670 defendants than to what is widely known as ‘Bushel’s Case.’ In that case, named for one of the fined Penn-Mead jurors, Chief Justice Sir John Vaughn voided the fines that the court had imposed on the jurors, and defended their autonomy to arrive at their own verdicts based on the evidence presented to them. That was all in the future, of course, on 3 September, 1670, as the Penn-Mead trial prepared to begin in earnest.

Andrew R. Murphy is Professor of Political Science at Rutgers University. He is the author of Liberty, Conscience, and Toleration: The Political Thought of William Penn. His previous books include Prodigal Nation: Moral Decline and Divine Punishment from New England to 9/11 and Conscience and Community: Revisiting Toleration and Religious Dissent in Early Modern England and America.