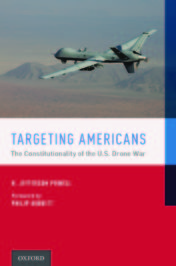 Targeting Americans: The Constitutionality of the U.S. Drone War

On 5 August, the Obama administration released a redacted version of its so-called “playbook” for making decisions about the capture or targeted killing of terrorists. Most of the commentary on Procedures for Approving Direct Action Against Terrorist Targets Located Outside the United States and Areas of Active Hostilities (22 May 2013), has focused on section 3.E.2, which stipulates that “Nominations shall be presented to the President for decision … when (1) the proposed individual is a U.S. person.” Translated out of the bureaucratese: at least off the battlefield the President makes the final decision, personally, about the targeted killing of American citizens and permanent residents. Many people find this fact about the administration’s decisional process momentous.

Reserving this decision for the President himself makes good political sense in light of the public uproar over the September 2011 drone strike that killed Anwar al-Awlaki, a high-ranking al-Qaeda planner and US citizen. It is understandable that the President might prefer to make the final call about reigniting that controversy. But there’s nothing very interesting about 3.E.2 if that is all it rests on, a prudential judgment about who should weigh the conflicting demands of strategy and public relations.

More interesting is whether Mr. Obama and his advisors share the belief of many commentators that there is something fitting in a deeper sense about the President shouldering personal responsibility for using deadly force against a fellow-citizen. Doesn’t the law, or the Constitution, require that “nominations” for death be “presented to the President for decision” when the nominee is a “US person?” Isn’t 3.E.2, underneath the antiseptic and obnoxious wording, a demonstration of our government’s fidelity to constitutional principle? The answer is no, if fidelity involves understanding our principles.

The Obama administration claims that its targeted killing policy is lawful under the Authorization for the Use of Military Force (the AUMF) that Congress enacted shortly after 9/11. Procedures for Approving Direct Action, in other words, describes the process for making certain military decisions in the conflict authorized and thus defined by Congress: the President may use “all necessary and appropriate force” against the perpetrators of 9/11 and their associates, but not against just anyone the executive perceives to be a “terrorist” or a threat. The administration’s own argument, then, is that its targeted killing policy is one means of conducting a congressionally authorized conflict against persons who are the 21st century, war-against-terror equivalent of uniformed Axis military personnel in the congressionally authorized Second World War.

The Obama administration claims that its targeted killing policy is lawful

The AUMF does not require that the President personally make the sort of targeting decision addressed by the “playbook.” This is hardly surprising: if the administration’s policy is lawful under the AUMF and international law, then as in the World War it is lawful to target specific enemy combatants, Admiral Yamamoto rather than some less skillful and dangerous Axis commander, to cite a famous example. Such an enemy combatant, then or now, is no more immune to the use of deadly force by the United States while drinking coffee or driving a car than he would be on the battlefield shooting at American soldiers. Neither the AUMF nor the Constitution requires that the President personally decide to target a specific enemy combatant, any more than such a decision is necessary on the battlefield, or against an enemy whose personal identity is unknown although his combatant status is clear.

By the administration’s own argument for the lawfulness of its targeted killing policy, the “playbook’s” insistence that this military decision be made by the Commander in Chief – unlike all the other command decisions about the use of force that the Constitution contemplates, and the AUMF authorizes – is legally superfluous. The fact that 3.E.2 concerns enemy combatants who are also US “persons” changes nothing. As the Supreme Court reaffirmed in the 2004 Hamdi decision, long-standing American practice and precedent reject the idea that citizenship somehow shields a person in arms against the United States from the use of military force. General Lee’s army, after all, was made up almost entirely of US citizens. (To question their citizenship is to say that Jefferson Davis was right, and Abraham Lincoln wrong, about the Civil War.)

What worries me is the suspicion that 3.E.2 reflects a belief, on the part of someone, that the targeted killing policy is something more (or is it less?) than an act of war, and that for this reason something beyond the ordinary processes of military decision is needed. If the Constitution gave the President a roving commission to kill dangerous people (whether citizens or not), then having the President take personal responsibility for doing so would make sense. But our Constitution neither grants the President, nor permits him to issue, an 007-style license to rid the world of anyone the executive branch suspects of being a threat.

Mr. Obama, admirably, has not claimed the authority to act in this manner. But the special role 3.E.2 reserves for the President in certain military targeting decisions is hard to understand otherwise, and the distinction it draws between “US persons” and others is pernicious. American citizenship is a high honor, but the foundation of the American Republic draws no ultimate distinction along that line: “We hold these truths to be self-evident, that all… are created equal.”

By affording citizen-enemies a procedural safeguard that it denies to others, Procedures for Approving Direct Action creates a precedent for treating foreign lives as less meaningful, less worthy of concern on the part of American decisionmakers, in a situation where neither law nor constitutional principle makes such a distinction. A future president, one less committed to Mr. Obama to respect for human life, may find this a useful precedent in claiming a free hand to deal summarily with “terrorists” as long as they owe no allegiance to this country. And history should give us little confidence that a legal category such as citizenship would long constrain a presidential James Bond, empowered to deal out death as he or she finds necessary.

H. Jefferson Powell is Professor of Law at Duke University. He is a prolific legal scholar and has written extensively on how constitutional concerns bear on other legal fields such as intellectual property and national security. He has taken sabbaticals from teaching during the Clinton and Obama administrations to serve as a Deputy Assistant Attorney General in the U.S. Department of Justice's Office of Legal Counsel and Principal Deputy Solicitor General. He is the author of Targeting Americans: The Constitutionality of the U.S. Drone War (OUP, 2016).