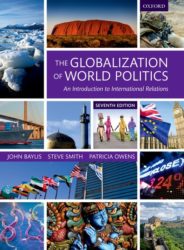 The Globalization of World Politics: An Introduction to International Relations

As the political season in the United States heats up, it has become controversial in certain circles to say “Black Lives Matter.” A few (perhaps even many) object because they don’t believe that black lives matter equally. Most, however, it seems to me, are responding out of fundamental misunderstandings of what “Black Lives Matter” means in the USA in 2016. (I will set aside crude partisanship as an explanation that, to the extent that it is true, does not require further comment.)

No serious person seriously believes that what is being claimed is that only black lives matter. The complaint instead is that “Black Lives Matter” implies that black lives matter in a special or privileged way – or even more than other lives. “Black Lives Matter” is taken as a demand for or assertion of “special rights;” a denigration of the lives and rights of members of other groups; or both.

A few (perhaps even many) may be making such racist claims. Most, however, are instead advancing claims of equal value and rights. Black lives matter too – in exactly the same ways that all other human lives matter.

How do claims to equal rights come to be understood as claims for special rights? The answer, I want to suggest, again setting aside self-interested partisan misconstrual, is a failure to appreciate the character of rights. In particular, this (mis)understanding fails to appreciate when rights are claimed (actively asserted) – and when they aren’t.

When a right is secure, a right-holder simply enjoys her right, without any need to claim it (and usually without even a thought as to making such a claim). We claim rights – we say “I have a right to that” – only when those rights are challenged, threatened, or violated. And we do so to demand, as we are entitled to demand, that our rights be respected and protected. As philosophers of language put it, claims of rights are “performative” (rather than descriptive). They aim to make things happen (rather than describe the world).

Do rich lives matter? Of course they do. But no one would say that unless the lives of rich people were being systematically threatened – which certainly is not the case in contemporary America. Although the description is accurate, the performance – saying “Rich Lives Matter” – would be, at best, oddly out of place.

Do white lives matter? Or course they do. But there is no reason or occasion to say that – unless one believes, against all the evidence, that “the white race” is under attack.

Consider, however, the sorry string of well-publicized killings of black men, women, and children at the hands of uniformed public officials; the fact that the names that we do know are only the tip of the iceberg; the obscene murder rates in many urban black communities; and the poverty, unemployment, and infant mortality rates of black Americans. These and similar appalling facts provide a powerful reason to say “Black Lives Matter.” And that reason is to try to better protect the equal rights of black Americans.

Do blue lives matter? Of course they do. And recently there have, sadly, been multiple occasions to say so.

“Blue Live Matter” and “Black Lives Matter,” however, are not competing claims, as some partisan demagogues have suggested. Quite the contrary, they are closely comparable appeals, in the face of unquestionable tragedies, to protect people who have been targeted simply because they are members of a particular group. If we define hate crimes as crimes motivated by the victim’s membership in a group, both “Blue Live Matter” and “Black Lives Matter” are appropriate, even necessary, protests against (and appeals for protection from) hate crimes.

Such claims by members of hated groups are not demands for special rights. They are assertions of rights that we all have, equally. The only thing “special” is the invidious discrimination that forces these victims to claim their rights. And the ultimate objective of such claims is to change policies and practices so that members of these groups no longer have a special need to make such claims; that is, to realize a world in which members of all groups are equally able to enjoy all of their rights.

“Blue Lives Matter” is a claim for restorative justice: to restore a situation in which the lives of men and women in blue are not threatened simply because of the honorable career that they have chosen. It is not a demand for special rights but an assertion of equal rights. And all defenders of the equal rights of all should both endorse this claim and lament the fact that it needs to be made in the United States of America in 2016.

Similarly, though, “Black Lives Matter” is, at the very least, a claim for restorative justice. (Many see it as a rights-based call for – finally! – establishing the real, full, and practical equality of black men, women, and children.) Rather than demanding special rights, it demands (nothing more, but nothing less, than) the equal protection of equal rights. And all defenders of the equal rights of all – all those who truly believe that all lives matter, equally – should both endorse this claim and lament the fact that today, as in generations past, it still needs to be made in the United States of America.

Precisely because all lives matter, equally, it is important that we say, here and now, “Black Lives Matter.”

Although I have stressed similarities, the differences between these groups are also striking. Race is not an occupational choice. Black skin cannot be taken off at the end of one’s work day. Blacks have been targeted for centuries, systematically, in the economy, in society, and by the state. Furthermore, although progress continues to be made in reducing discrimination, unconscious racial bias remains a serious problem – as even police training programs are increasingly recognizing. In other words, the case for saying “Black Lives Matter” is especially pressing and compelling.

Jack Donnelly is Andrew Mellon Professor and John Evans Professor at the Josef Korbel School of International Studies, University of Denver. He has contributed the chapter on Human Rights to The Globalization of World Politics: An Introduction to International Relations, Seventh Edition.

International disability rights and the dilemma of domestic courts