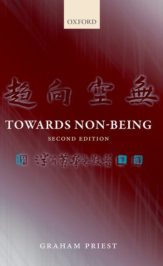 Let me tell you—briefly—about strange case from the history of philosophy.

It was a view shared by Bertrand Russell (1872-1970) in 1903; but in 1905 something interesting happened. Russell proposed a theory (known now as his theory of definite descriptions), according to which names like “Father Christmas” were shorthand for descriptions, such as “the old man who comes down the chimney at Christmas bringing presents”. And to say that Father Christmas does not exist, is not to attribute non-existence to a non-existent (obviously) object; it is just to say that nothing (or, to be precise, no unique thing) satisfies that description. Russell, then, came to reject Meinong’s view. It wasn’t so much that Russell’s theory did a good job of handling examples such as the above: when you apply Russell’s theory to claims such as “I am thinking of Father Christmas”, it patently gives the wrong result. Rather, said Russell, Meinong’s view offended against a “robust sense of reality”.

Russell’s influence on the 20th century logic and the philosophy of language was, of course, substantial, and his view about Meinong persuaded many. In 1948 the American logician Willard van Orman Quine (1908-2000) wrote a paper entitled “On What There Is”, in which he caricatured Meinong as the fictional character McX—not that there is any evidence to suggest that Quine had actually read Meinong. But the paper sealed Meinong’s fate. As Gilbert Ryle (1900-1976) put it in 1973, Meinong’s theory is “dead and buried, and not going to be resurrected”.

The victors, as the saying goes, get to write the history. Meinongianism became a term of abuse. He was a fruitcake, a momentary aberration in the history of Western philosophy, which was soon righted by Russell and Quine. The history, I note, is completely wrong: most of the great medieval logicians, like Jean Buridan and Paul of Venice, invoked non-existent objects in contexts of the kind in which Meinong was interested—not to mention Aristotle himself. Still, most contemporary logicians don’t know much about the history of logic. And for better or worse, the view about Meinong became unquestioned orthodoxy. It was certainly the view that I myself held when I was a young philosopher in the early 1970s.

Now to the strange thing. In the last 30 years, Meinong’s view has been making a comeback. Several philosophers have been involved in this, but the most important for me was the late Australasian philosopher, Richard Routley (or Sylvan, as he became). It was arguing with Richard for many years that persuaded me that the arguments against Meinong’s view were poor, and that it had a simplicity and common sense, in contrast to which other views limp. So I changed my mind, and became a Meinongian—or noneist, as Richard called it.

Why has this change taken place? A hard question. Undoubtedly many factors are involved. Certainly, one important one is that the arguments against noneism are, indeed, bad. Another is that Russell’s theory of descriptions, as applied to names, is now itself history, despatched by Saul Kripke’s onslaught in the 1970s.

But there is, I think, more to the matter than this. Philosophers (myself included) like to pride themselves as rational—driven simply by the force of reason and argument. But fashion plays more of a role in the discipline than we might like to admit. Often, old philosophical views are not refuted; people simply get bored with them, and want to strike out in new directions. Conversely, a discarded view can make a comeback, because these new directions are more congenial to the view—and it cannot be denied that developments in modern logic have helped the Meinong-revival.

Then there is power and prestige. The English-speaking philosophers I have mentioned were all in centres of academic power: Cambridge, Harvard, Oxford. Their students themselves often came to hold positions of influence in English-speaking universities, and carried the doctrines of their mentors with them. But then there is generation-change. Just as young people want to assert their independence from their parents by rejecting their views, so a new generation of philosophers want to stamp its authority on the subject, and you can’t do that simply by reproducing the past.

Anyway, whether the explanations I proffer are right or wrong, noneism is certainly making a comeback—and the advances in the techniques of formal logic are making it possible to articulate and investigate the view with a sophistication unavailable to Meinong himself. My own preference is to employ semantics using possible and impossible worlds.

It must be said, in fairness, however, that anti-noneism is still the orthodox view amongst English-speaking philosophers. But, in my view, what we are witnessing is something of a sea-change on the matter. And when it has taken place, it will not be Meinong’s views which appear to be a momentary aberration in the history of Western philosophy, but those of Russell and Quine.

Graham Priest is Distinguished Professor of Philosophy at the Graduate Center, City University of New York. He has held professorial positions at a number of universities in Australia, the UK, and the USA. He is well known for his work on non-classical logic, and its application to metaphysics and the history of philosophy. He is the author of Towards Non-Being (OUP, 2016).