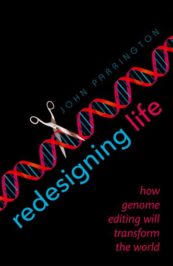 Redesigning Life: How Genome Editing Will Transform the World

“O wonder!
How many goodly creatures are there here!
How beauteous mankind is!
O brave new world,
That has such people in’t!”

Shakespeare’s lines in The Tempest famously inspired Aldous Huxley’s novel Brave New World, first published in 1932. Huxley’s vision of the future has become a byword for the idea that attempts at genetic (and social) engineering are bound to go wrong. With its crude partitioning of society, by stunting human development before birth, and with its use of a drug – soma – to induce a false sense of happiness and suppress dissent, this was the opposite of a ‘beauteous’ world.

Brave New World was set in the year 2540, yet science in our own time has in many ways already progressed far beyond anything Huxley imagined. Genome editing now makes it possible to precisely modify the DNA of living cells of practically any species. Indeed, last year scientists in China genetically ‘corrected’ a mutated gene in a human embryo. Although there was no intention of implanting the modified embryos in a woman, this achievement ignited a debate about whether this was the start of a ‘slippery slope’ to use such an approach for clinical purposes, or even to enhance particular characteristics.

We still lack the ability described in Brave New World to nurture human foetuses outside the womb. But new advances in stem cell technology are making it possible to grow ‘organoids’ with similarities to human intestines, livers, eyes, and even brains in culture; a viable artificial womb is not as far-fetched an idea as it might once have seemed.

There is no current pharmacological equivalent of Huxley’s soma. But optogenetics – which involves activating brain cells using laser light – has recently been used to erase memories or implant fresh ones, and even cure depression, at least in a genetically engineered mouse model. It is fair to speculate that optogenetics might one day be used to treat mental disorders such as depression, schizophrenia, or bipolar disorder.

If gene editing, optogenetics, or generation of human organs from stem cells, are becoming much closer to scientific feasibility, is this a new world that we should be trying to avoid at all costs, given the possibility for misuse? Could gene editing be used to create a future world of genetically ‘perfection’, but only amongst the select few who can afford such an option for their children? And might optogenetics be used for sinister purposes such as brainwashing?

In fact, compared to other branches of science such as mechanics, chemistry, or nuclear physics, which has given humanity such objects of destruction as the machine gun or the atom bomb, biotechnology remains a benign science. It is true that such a state of affairs could change given the relative ease and precision with which it is now possible to modify organisms. But it is important not to underestimate the challenges faced by anyone seeking to engineer a new, deadly pathogen for the purposes of terrorism. There would be major logistical challenges for anyone who would seek to create and use these as biological weapons without killing themselves in the process.

For agriculture, genome editing offers the possibility of making subtle modifications to the genetic make-up of crops or farm animals in a far more sophisticated fashion than was possible with past GM approaches. This could be used to introduce resistance to infection by viruses or boost nutritional content of resulting foodstuffs. But it also raises the question of whether such technology will be employed in a sustainable way to address the needs of ordinary people across the world or merely be used to boost the profits of giant corporations and ignore potential adverse effects on the environment.

In medicine, genome editing may soon be used to ‘correct’ genetic defects underlying disorders such as cystic fibrosis or muscular dystrophy, or to eliminate viruses like HIV from the cells of infected individuals. For the first time they offer the possibility of truly personalized medicine tailored to the individual. Yet as well as the many technical obstacles to be overcome to make this dream a reality, there are also many other issues to consider. Such medical intervention will be expensive, so how will we ensure that it is available to all who need it? We could potentially re-engineer wild mosquito populations so that they can no longer carry the deadly malaria parasite, but what are the possible unintended consequences to natural ecosystems of altering a wild species in this way?

Optogenetics might one day be used to treat disorders of the human mind. But could it also be employed for more sinister purposes, for instance to brainwash political opponents, or render a population sympathetic to a dictator’s will?

Is it realistic to think that genome editing might be used to ‘enhance’ human capability? Possibly not. The more we learn about genetic links to characteristics such as intelligence, the more complex this link appears. In addition, there is increasing evidence of similarities in brain processes involved in intellectual creativity and mental instability, so trying to engineer ‘genius’ could easily backfire. Finally, there is ample evidence that a whole host of different human talents, ranging from Einstein’s intellectual insights to Ronaldo’s footballing skills, are as much a product of nurture as of nature. So focusing on genetic transformation rather than improving the social environment that can nurture such talent may be misguided.

All of these are social as much as scientific questions. And such is the potential scope of the transformation of society that these new technologies makes possible that we need a society-wide debate about these issues. Yet if such a wider debate is to become a reality, it will need to overcome both the fear and distrust many people have about science, and of political elites and ‘experts’ in general. It will require a wider awareness of the science and the technologies and it will only happen when ordinary people feel they have a stake in the future applications of these technologies.

John Parrington is Associate Professor in the Department of Pharmacology at the University of Oxford. A British Science Association Media Fellow, he has written for The Times, The Guardian and New Scientist, Chemistry World, and The Biologist. He is the author of The Deeper Genome and his most recent book is Redesigning Life: How Genome Editing Will Transform the World.