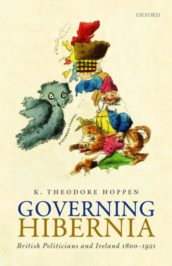 Historians of both Britain and Ireland have too often adopted a blinkered approach in which their countries have been envisaged as somehow divorced from the continent in which they are geographically placed. If America and the Empire get an occasional mention, Europe as a whole has largely been ignored. Of course the British-Irish relationship had (and has) its peculiarities. For one thing its long history going back to the Norman invasion of Ireland in 1169 has generated influences and feelings of a distinct and unique kind: long familiarity underpinned by both antagonism and (at times) a type of weary and indeed wary acceptance. The word most commonly employed in analyzing the relationship is that of ‘colonialism’ which — rightly or wrongly — tends to carry with it intimations not only of cultural and political but also of geographical distance when in fact Dublin is only some 68 miles across the Irish Sea from Holyhead in Wales. Thus, when in 1800 — after the bitter Irish Rebellion of 1798 — the Act of Union between Britain and Ireland was enacted, this marked not only the introduction of a closer relationship but the culmination of centuries of conflict and accommodation on both sides.

What might shed greater light upon the Anglo-Irish relationship is an examination of similar situations elsewhere in Europe itself. Indeed, the oscillations under the Union on the part of British ministers between, on the one hand, policies designed to integrate and assimilate Ireland more closely into British political and cultural norms and, on the other, to acknowledge (within certain limits) Irish distinctiveness, parallel actions taken elsewhere in Europe by politicians similarly obliged to deal with complex relationship between dominant economic and political ‘cores’ and outlying peripheries. Indeed, in this matter the Anglo-Irish relationship was — in international terms — very far from unique, something which few British or Irish leaders seem to have realized.

Gladstone was one of the few exceptions, having experienced a kind of foreshadowing of his later Irish involvement when acting in 1858-9 as Special Commissioner to the Ionian Islands off the west coast of Greece and since 1815 a British protectorate. In 1885, he lectured cabinet colleagues about the relevance for the Irish case of “the prolonged experience of Norway (I might perhaps mention Finland) and the altogether new experiencer of Austria-Hungary” — all of them examples of core-periphery relations with strong Irish parallels.

Finland, which had come under Russian rule in 1809, was, like Ireland, generating strong narratives about history, landscape, and people that together helped to transform abstract concepts of the nation into concrete visual, textual, and polemical articulations of national consciousness. Tsarist Russia, though at first supportive of Finnish cultural and linguistic particularism as furnishing a wedge between the Finns and their former Swedish overlords, shifted to a policy of coercive Russification towards the end of the nineteenth century, something with clear resonances so far as Britain and Ireland were concerned. Norway, however, after experiencing early attempts by Sweden to tighten central control, began to outrun Finland in the matter of autonomy before achieving full independence in 1905, while the broadly analogous case of Denmark and Iceland — inevitably shaped by the enormous distances involved — also witnessed movement from assimilation to greater autonomy as time went on. Indeed, Iceland’s progress did not go unnoticed among supporters of Irish nationalism, some of whom looked to its successes as providing Ireland with encouragement and Britain with a pattern to follow.

If the Nordic cases cast revealing light upon the governmental situation created by the Irish Act of Union of 1800, developments elsewhere in Europe — in Austro-Hungary, in Italy, in Spain, in Switzerland, in the creation of an independent Belgium, and in the unification of Germany — also possess much greater relevance to the Anglo-Irish case than has generally been acknowledged. Thus Cavour’s lordly attitude to Sicily (whose inhabitants, he claimed, spoke “Arabic”) echoed views commonly held in Whitehall’s corridors of power so far as Ireland was concerned. Indeed Cavour never seems to have traveled further south than Florence, just as Disraeli, for example, never crossed the Irish Sea.

Because a common feature to many of these core-periphery relationships is to be found in the fact that ideas of assimilation and differentiation underlay much of the thinking involved a more conscious ‘placing’ of the Anglo-Irish connection into a wider European framework might well prove illuminating in new and exciting ways.

K. Theodore Hoppen is Emeritus Professor of History in the University of Hull and has written extensively on both British and Irish History. He is the author of Governing Hibernia: British Politicians and Ireland 1800-1921.