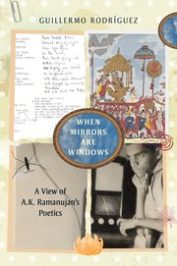 When Mirrors Are Windows

Attipate Krishnaswami Ramanujan left behind a great legacy of prose, poetry, and scholarly works. Guillermo Rodríguez analyses a spectrum of Ramanujan’s published and unpublished sources, including some hitherto unknown pieces, and shows how classic Tamil, medieval bhakti, oral folk aesthetics, and literature influenced the Indian writer. The following extract from When Mirrors are Windows looks at the “Mescalin Notes” Ramanujan wrote during an experimentation with the hallucinogenic drug mescaline.

In the 1950s and 60s a cross-section of psychologists, writers and artists in America, partly inspired by Aldous Huxley’s essay The Doors of Perception published in 1954, experimented with hallucinogenics like LSD, mescaline, mushrooms, and hashish to venture into new realms of experience, seeking the “hidden” reality of the self and the world and probing into the meaning of art to locate their ‘inner vision‘. They believed that certain substances could create mystical perception, aid artistic inspiration or reprogram the brain. In the poetry scene of India and its American “connections” this trend also had a visible, yet limited, impact. Alan Ginsberg and his partner Peter Orlovsky travelled extensively around India in 1962-63, interacted with Bengali poets in Calcutta and also met Nissim Ezekiel and other Indian poets writing in English in Bombay at that time. Ezekiel was an old friend of the noted South Indian scholar, translator, folklorist and poet A.K. Ramanujan who had settled in the United States as early as 1959. Years later, in 1967, the same year he visited Ramanujan in Chicago, Ezekiel is said to have had his first of a series of LSD trips in California. On the other hand, Ramanujan had also met at Berkeley Josephine Miles, the poetess who was a leading inspiration to the Beat poets.

And so given the literary precedents and social context in America in the late 1960s and early 1970s it was by no means uncommon that reputed intellectuals and artists resorted to psychedelic substances in their search of an inner truth, as a source of inspiration, or simply as an occasional trial. Ramanujan was not unaware of this trend. Considering his interest in psychology, dreams and the invisible links between the physical and the metaphysical, and his propensity to drift into unknown worlds to discover new realities, it is not surprising that, on a Saturday evening in the summer of 1971, alone in a Madison apartment, Ramanujan decided to take a dose of mescaline as an experiment and challenge. He was forty-two when he got acquainted with the effects of this new hallucinogenic, and part of his experience, in an attempt to emulate Aldous Huxley, he jotted down on paper.

Ramanujan’s experiment on the night of 28 August 1971, which left deep marks on his ideas about art, poetry and the body, remained unknown as he never mentioned it publicly. The “Mescalin Notes” were tucked away among the scholarly notes in the A.K. Ramanujan Papers stored at the University of Chicago. Some years ago I chanced upon these twenty-four pages of prose scribblings while researching a series of unpublished poetry drafts the author was going to call Soma. The notes not only relate the particularities of the experience and describe the progressive effects of the chemical substance on the poet’s mind (the senses); they also make an unusual aesthetic manifesto of an Indian poet living in America.

Contrary to Huxley, who was accompanied by a scientist doctor and recorded the observations made under the influence of the drug on an audio tape, Ramanujan`s experiment was an informal incident ‘transcribed” pen-in-hand during the experience itself, as far as that was possible. Ramanujan had no particular pretensions to artistic inspiration when taking the mescaline dose, but to sit down and “meditate.” And like Huxley he conceived the act of “recording” the experience as an intellectual exercise and a psychological experiment. He was interested in the dream-world and psychology, in philosophical as well as scientific matters, and at some point felt he was stepping into Huxley’s footsteps with his trial: “The long journey that Huxley started,” noted Ramanujan in his typical ironic mode on the night of 28 August, 1971, “ends, or begins after 20 years in this III floor Apt. and I can’t bear to read Huxley – yet in spite of Heraclitus, he points to a shared dreaming, not just a shared waking – Swinburne’s peyote trances -Huxley used to call it – must read him now.”

Ramanujan`s intentions with the mescaline adventure were complex and ambiguous for he knew that the actual output derived from it would be rather uncontrollable. Within a wider perspective the mescaline experience had philosophical, metaphysical, religious, aesthetic, and poetic implications for him. In the notes he records with detail the alterations of the sensorial faculties, i.e. sight, sound, touch and taste. It all begins by listening to Vivaldi, followed by The Beatles, Indian violin music, Mozart, Bach, and Schumann on the evening of the mescaline trip, as the writer is struck by the intensity of the colours and shapes “cartooning” behind his eyes. This is how the aesthetic tour de force starts:

Vivaldi – flowing – expectancy – surveying all the objects in front
Slight weakness & tremor of limbs –
lying down – evening sunlight  fell on my stretched hand with watch, golden-yellow hair –
the sun was really a reflection in a west-facing
window –

Dry chalklike feeling in the throat—shiver in the calves—
My handwriting isn’t clear, getting less coordinated as my forearm muscles
are aquiver—
A coursing of blood all over—
Earlier on, I took account of all fearful objects, tribal spears, the butterfish
over-hanging—but I’m not going to be afraid—I’m going to meditate

From here on the imagery and colours pouring out of his mind turn into an unstoppable process and get increasingly out of control as the poet struggles to hold on to reality and translate into his own words on the page the patterns and designs he perceives. Indeed, Ramanujan’s compelling account of the “behind the eyes world” in the “Mescalin Notes” begins with an evocative image and suitable metaphor for what is to unfold when he opens the ‘windows of perception’: still in the wakeful world, before closing his eyes to meditate, what he sees as the “evening sunlight” (“golden-yellow hair”), that is, “the sun,” is “really a reflection” in a “west-facing window–”. Isn’t at times what we see in (ordinary) life really a reflection, an illusion (maya), as we always look at things through the playful mirror of our mind?

Guillermo Rodríguez, an active promoter of Indo-Spanish cultural relations, is the founding director of Casa de la India, a pioneering cultural centre in Spain, which has become the model for India’s cultural diplomacy abroad. A passionate traveller, it was during a visit to India in the early 1990s that he chanced upon Indian poetry in the translations of A.K. Ramanujan, thereby awakening his interest in the life and works of the poet-scholar. He is the author of When Mirrors Are Windows (OUP, 2016).