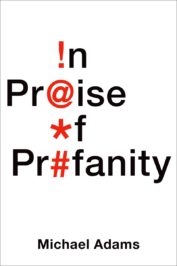 In Praise of Profanity

We adults are careful about swearing around our kids. We don’t want bad language to confuse or corrupt or otherwise harm them. As Steven Pinker says in passing while talking about profanity in The Stuff of Thought (2007), “if some people would rather not explain to their young children what a blow job is, there should be television channels that don’t force them to,” and there are. We have every right to be protective of our children even if we don’t have a reason.

So, we protect our children from profanity—or try to protect them, anyway. Usually, we aren’t on the spot to police their speech at crucial moments, when they’re on the playground or huddled in those cute little gangs they form. If we’re honest, we have to admit that protecting them isn’t our only concern. We can’t bear the scrutiny of disapproving adults, and they’re everywhere. We think—as do said disapproving adults—that we ought to be ashamed of our kids for their profanity and ourselves for letting them grow into vulgar ruffians. But maybe we should be ashamed of our shame.

We try not to swear in front of the kids, but we slip on occasion, sometimes swallowing something we nearly uttered so that the kids can’t identify it. But the kids know we swear. And so we are often guilty, in Pinker’s words, of “a show of hypocrisy” which, if not quite honorable, is nonetheless “one of the perquisites of parenthood.” We put them to bed and then snigger over our hidden copies of Adam Mansbach’s Go the Fuck to Sleep. The kids get their slang, but profanity belongs to us. Of course, sooner or later, the kids get everything.

When my son, Ollie, was two, he would start the “Alphabet Song” with “ABCDeffinG.” It set some casual observers back. Jenny and I thought it was funny and innocent, but sometimes our cheeks would flush. You can see kids start to take charge with profanity, assert their right of free expression. “Oh my God!” Ollie will wail when we just don’t get whatever it is or whatever he wants. “Oh, my gosh!” we remind him. Ollie’s friend, Ella, once went out to get something out of her Paw Paw’s barn, but when she got there, the door was locked. She realized she’d have to walk 100 yards back to the house to get the keys, so she shouted, “Goddamn it!” You know where you stand with Ella. And she already owns her voice.

But the kids know we swear. And so we are often guilty, in Pinker’s words, of “a show of hypocrisy” which, if not quite honorable, is nonetheless “one of the perquisites of parenthood.”

Where do kids learn this stuff? From one another, of course, as well as from their erring parents, but media may play a role, too—kids sponge up what they know from everything. Sarah M. Coyne and a bunch of other researchers at Brigham Young University studied profanity in adolescent literature and published the results in the journal Mass Communication and Society (2012). They analyzed a controlled sample of 13,884 pages of adolescent fiction, they found a number of interesting, though not necessarily surprising, things: there’s a lot of profanity in fiction for teenagers, at a rate of roughly 34 instances per book, but in one case rising to 500 instances; books for older kids include more profanity than books for younger ones; and in the books, adolescent characters swear more than adults. Well, I get that. Adolescents swear. Hormones demand it. They resist adult power, transgress all norms but their own, and generally just piss people off. Adults try to stamp the profanity fires out, but, when your kids are teenagers, there are lots and lots of fires. Maybe that’s why attempts to eliminate teen profanity never work, at least, not totally.

I’m just surprised at how early it starts. Kids are exposed to profanity in media when they’re two or three years old. In Lauren Faust’s excellent My Little Pony: Friendship is Magic, currently in its sixth season, one of the circle of pony friends, Applejack (voiced by the inimitable Ashley Ball), is the “country” character whose family owns a big apple orchard. She’s tough-minded and plain-spoken, but also soft-hearted—her favorite term of endearment is Sugarcube. She’s the only one among the ponies who comes close to swearing. She says things like, “What in the hay is that supposed to mean?” and “That filly in there may be our best chance of finding what the hay is going on around here,” and “What the hay just happened?” That’s more or less what I said when I heard what she said.

My daughter, Amelia, is a My Little Pony fan, though she says she likes Twilight Sparkle and Rainbow Dash best of the ponies. She rarely talks about Applejack. Nevertheless, she often exclaims “What the heck?” when something takes her by surprise, and I wonder where she got it. I want to blame My Little Pony, but its origins are probably more profound. It’s true that we can say things like “Where the grass grows greener is the other side” and “What the lion does is roar,” but “Where the” and “What the“ signal profanity or a euphemism, especially with a certain tinge of intonation: “Where in hell do you think you’re going? What the fuck do you think you’re doing? Why the deuce are we using so much profanity?” Two of those—I won’t tell you which two—are sentences torn from the story of my life. Anyway, Amelia had figured out the special status of “What the” well before her fourth birthday. Some of it’s in the brain; some of it’s in the ether.

That’s not the best of it. One day recently, something astonished her, and Amelia said, “What the heck?” Then she looked at me and said, “Let me tell you something, Daddy”—she says that a lot—Sometimes I say “What the heck?” and sometimes I just say “What the …?” She pulls the “What the” idiom out by its ears but keeps euphemism up her sleeve. Before I had children, this was one of my fantasies—a father and daughter metalinguistic moment. Now, I realize, it won’t be the last, just the last when it has anything to do with My Little Pony and when I know what the hay is going on.

Michael Adams is Provost Professor of English Language and Literature at Indiana University, Bloomington, and author or editor of several books on language, including In Praise of Profanity (OUP 2016), Slayer Slang (OUP, 2003), Slang: The People’s Poetry (OUP, 2009), and From Elvish to Klingon (OUP, 2011). For many years, he was Editor of the journal Dictionaries, and he recently retired as Editor of the quarterly journal, American Speech.