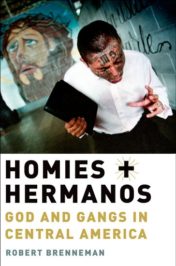 Homies and Hermanos: God and Gangs in Central America

During the closing week of the Rio games, the biggest story was not about the pool, the mat, or the track but rather about the after-game party . . . and the after-party mess. As of Friday morning, the next-to-last day of the games, the home page of the New York Times was carrying headlines for five separate articles concerning the event. Clearly, the events that unfolded when the swimmers arrived at the gas station as well as the interviews given by American medalist Ryan Lochte, fit some powerful stereotypes about Brazilian (in)security and American hedonism and hubris. Many Brazilians were understandably angry with what appears to have been yet another example of Americans treating their country—as one knowledgeable American put it—“like a third-rate spring break destination where you can lie to the cops and get away with it.” But one aspect of the story that was completely ignored is the fact that the actions of Lochte and the security officer cast light on Latin America’s colossal investment in private security.

Private security has grown everywhere. A 2011 report by the Geneva-based Small Arms Survey estimates that there are upwards of 20 million private security officers employed worldwide—a number that is higher than the global total of public (i.e. government-paid) police officers. Brazil, which has invested heavily in public policing in recent years, has a ratio that is closer to 1:1 private-to-public security officers. But the same report found that compared with the rest of the world, private security officers in Latin America are much more likely to be armed. Thus, Lochte’s account of the private security officer “brandishing a weapon” was not disputed by the Brazilian authorities. In fact, as anyone who has traveled widely in Latin America can attest, a gun (often a BIG gun) is one of the most recognizable attributes of a private security officer. Not just his uniform, but his weapon, tell you not to break the law in his presence. Indeed, the image of a uniformed man standing at the entrance to a coffee shop (like the one below, taken by me outside a Guatemalan coffee shop) is often one of the images that most jolts American tourists in the region.

So why this massive investment in armed private security? The most obvious and oft-cited culprit is neo-liberal economic policies. That is, in an effort to reduce the size of government and lower taxes, citizen security has become yet another formerly-public service that is increasingly “out-sourced” to the private sector as a commodity. There is surely some truth to this explanation but it fits better in some countries than others. For example, El Salvador has been steadily increasing the number of uniformed National Police officers but there is little if any evidence that this measure has stemmed demand for private security contracts. (The homicide rate there is currently at its highest point ever and the highest in the hemisphere.) Thus, insecurity, rather than simply disinvestment, is an important factor contributing to the regional rise in armed private security. The fact that Latin America is the only region in the world that saw a measurable increase in lethal violence during the last two decades according to a 2011 World Bank report by James Fearon reveals that Latin American governments’ “provision” of security has not kept up with demand.

Other analysts point to a recent history of civil war and to the availability of small arms, especially for those societies located in relative proximity to the small arms bazaars of the southern United States. Both of these factors also play a role, particularly in incentivizing the issuance of firearms to private officers. And we could name other important historical factors such as the rise of transnational gangs in Central America and Brazil, the growth of the drug trade across the Mesoamerican isthmus, and endemic corruption in the judicial structures across much of the region.

But all of these factors, important though they may be, point to the existence of strong demand for private security. In reality, however, supply-side factors have also played a role. In Guatemala City, where I currently live and conduct research, one can see evidence of a bustling private security sector in which firms compete and promote their services in ways that cannot help but goose public demand. Take for instance the billboard my son (a die-hard Lego fan) pointed out to me yesterday in the car ride home from school.

To the right, an image of a fallen Lego cop with a broken arm (who is being pursued by what is either a villain or perhaps a private security officer running to his aid) the text reads: “Your security is NOT a toy.” Beneath the image is the company logo for Sion, which is the Spanish translation for Zion, the capital of the Israelites of the Hebrew Scriptures. Although this particular firm is of recent vintage, having been officially founded in 2010, since the 1980s, the most well-known private security companies in Guatemala have had Israeli-inspired names such as “Grupo Golan” and “Servicios Israelis de Seguridad.” According to a well-researched study by Otto Argueta, some of Guatemala’s oldest and most expensive firms were founded by Israeli and American intelligence personnel who had provided training and intelligence services during the war. The presence of these foreigners as well as an abundance of retired military officers with intelligence-gathering knowledge and networks, contributed to a large supply of competing security firms in the post-war era. Similarly, an oversupply of unemployed and under-employed men in Guatemala and throughout the region, allow private security companies an inexpensive labor market from which to draw their rank-and-file officers.

Which brings us back to the gas station in Rio, where an off-duty prison guard, moonlighting as a rent-a-cop to scrape together some extra income in a difficult economy, came face-to-face with a drunken Olympic medalist with dreams of starring in a reality show. Faced with a belligerent, unrepentant vandal, the Brazilian guard pulled out his weapon — the one thing that he must have thought might bring some order to a chaotic and frustrating situation. But at that point he entered even more fully the vast gray area of law enforcement created by private security’s epic rise. Was he “impersonating” a police officer or simply doing his best to keep the peace? Was the monetary exchange extortion or repayment for damages? Surely it depends not merely on what the law says but on the cultural and political underpinnings of the term “police officer.” One thing is for certain: Ryan Lochte’s “reality show” is just getting started.

Robert Brenneman is Associate Professor of Sociology at Saint Michael’s College and a Fulbright Fellow in Guatemala. He is the author of Homies and Hermanos: God and the Gang in Central America (Oxford University Press, 2012).