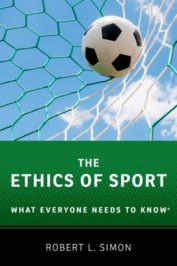 The Ethics of Sport: What Everyone Needs to Know

“Tanking,” or deliberately trying to lose an athletic contest to gain a future competitive advantage, such as earning higher draft pick of prospective players, became the talk of the town or at least of many fans, in many US cities saddled with losing teams in such sports as hockey, basketball, and baseball. If actually practiced, however, tanking would exploit spectator, players, and coaches alike.

While teams that tank do so secretly, examples of the practice have all too frequently come to light. For example, two girls’ high school basketball teams from Tennessee were disqualified last year from the post-season playoffs for each trying to lose a game against each other in order to draw a weaker opponent in post-season play. Instances can be found in professional sports as well. Badminton players from China, Indonesia, and South Korea were disqualified from the 2012 London Olympics for trying to lose matches so as to obtain a better future seed. Similarly, the 2005-06 Timberwolves of the NBA were plausibly accused of tanking their last game so as not to lose a high draft pick to a team with an even worse record.

The notion of tanking isn’t limited just to athletes and coaches, however, as all too many fans of losing professional teams are constantly urging their teams to purposely lose games in order to gain an advantage in the draft of new players. In fact, chatter about tanking – the unintended consequence of the draft system in many professional sports leagues, including the NBA, NFL, and WNBA – was prevalent on-line last season among fans of some losing NBA and NHL teams.

While these “fans” might not question whether it’s unethical for professional teams to tank, they should. They are guilty of using the present team members as mere tools for the advantage of next year’s team. Everyone involved – fans as well as players and coaches – are exploited in these schemes.

Losing on purpose cheats fans who attend sporting events believing they will see an actual game. Think of two teams playing each other, each trying to lose on purpose, presumably without being detected. Would anyone pay to see such an anti-game if they actually knew what was going on? How does presenting an event as a contest when it is no such thing differ from false advertising or knowingly presenting consumers with a defective product?

Perhaps more important, if tanking became a regular practice, how could anyone tell that what was being played was a true contest rather than a counterfeit? The very integrity of the sport would be called into question.

Some might argue that professional sports teams are businesses. If intentionally losing a few games now leads to much greater success in the future, why not do it? Isn’t the goal of running a business to make a profit?

While it is true that professional sports are big businesses, businesses have moral obligations other than simply making a profit. They have moral obligations to provide safe working conditions for their employees, to refrain from knowingly selling defective products, and to not engage in false advertising. The idea of intentionally losing calls all of these moral obligations into question. Thus, trading players in order to make room to pay better players more in the future is a legitimate way of building for the future. But would it be legitimate if a team were to deliberately limit playing time of its best players simply in order to insure losses?

Teams at elite levels of play may well ignore this incentive and try to win. Players and coaches have strong incentives not to appear inept which would lower their market value, and as a consequence never actually tank. Fans, however, may suspect otherwise, and all too often root for their teams to lose. The integrity of the game is then called into question.

Tanking, and those who call for it, threatens the very idea of a true competition in sport. Those who call for their teams to tank need to understand that even the appearance of tanking can threaten the integrity of competition. It undermines what is perhaps the central value underlying athletic competition, the tacit agreement among competitors to actually test one another to see who best meets the challenge of their sport.

Robert L. Simon is the Walcott D. Bartlett Professor of Philosophy, Emeritus, at Hamilton College in Clinton, NY. He is the co-author of Fair Play: The Ethics of Sport and the author of the forthcoming The Ethics of Sport: What Everyone Needs to Know.