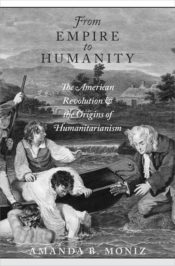 From Empire to Humanity: The American Revolution and the Origins of Humanitarianism.

As a historian of philanthropy, I have wrestled with how to bring historical perspectives to my own gifts of time and money. I study philanthropists in North America, the British Isles, and the Caribbean in the eighteenth and early nineteenth centuries. The distant past, you might think, and of little concern to our philanthropic practices today. Yet for a while, immersed in the topic, I could not make so much as a modest donation without also considering hundreds of years of charitable developments. An encounter with a homeless person might leave me reflecting on how people in previous centuries defined the “worthy poor,” or those people eligible for aid. Volunteering to help a charity in my neighborhood prompted contemplation of the unintended and harmful consequences of programs in the past. Unsure about how to allow my knowledge of the past to inform my decisions today, I wondered if studying long-ago humanitarians meant I had to eschew charitable activity in my own life.

I approach questions about humanitarianism both with my historian’s mindset and with contemporary concerns. For a time, the two ways of thinking led to intellectual – and moral – paralysis. I eventually realized that the question I had been asking is how can historical perspectives help with decision-making? In my role at the National History Center of the American Historical Association, I think about this question in relation to policy conversations. I believe that understanding the history behind today’s policy challenges can meaningfully inform public decision-making. It was when I sought to apply this belief to my own life that I had to think more carefully about what I meant.

I believe that understanding the history behind today’s policy challenges can meaningfully inform public decision-making.

A reason for my dilemma, I realized, was that I initially considered questions about contemporary philanthropy by making analogies to the past. In the late eighteenth century, doctors played leading roles in the spread of innovative charitable institutions around the Atlantic world thanks to their strong networks. Recognizing doctors’ role and the professional imperatives that shaped it is important for understanding eighteenth-century humanitarianism. Analogizing from it to ask how a novel charitable movement today had spread across the United States, however, proved unhelpful. The contexts are too different for the parallels to be meaningful.

Once I quit trying to draw analogies, I was able to reflect more holistically and found that my exploration of leading American and British philanthropists of the eighteenth century helped me think about where I wanted to make a contribution. The men I study acted both locally and globally. They founded and ran charities in their cities and collaborated with far-flung friends to advance medical charity, anti-poverty efforts, antislavery, prison reform, and other causes around the Atlantic and beyond. They were motivated by sincere concern for the well-being of humanity. In the years after the American Revolution, Americans and Britons also used their correspondence about beneficent projects to feel out their new relationship to one another. Transatlantic philanthropy helped them contribute to transnational conversations. Thinking about that dimension to my subjects’ activities helped me realize that I feel most equipped to participate in local conversations about poverty, gentrification, and inequality. As a result, I have chosen to focus my energies on local organizations.

A historical perspective also helped me become more comfortable with uncertainty about the impact of my time or money. Concerns among today’s philanthropists about effectiveness are nothing new. Managers and supporters of charities in the eighteenth and nineteenth centuries likewise sought to use their money wisely. Yet potential clients rarely had much say in devising programs meant to serve them. As a result, my subjects sometimes struggled to attract clients or found that their proffered aid did not meet clients’ needs. They also contended with clients who violated charities’ rules (not infrequently abetted by charities’ managers who humanely ignored those rules). Recognizing that charities often were less effective than they claimed publicly could have made me reluctant to support charities today. Instead, the work of historians of poverty helped me understand that in the past charities’ clients have tapped philanthropic resources as one part of their survival strategies. My guess is the same holds true today. People in need may use charitable programs to ease their hardships and gain control over their lives in ways donors may not understand. Knowledge of the history of poverty tells me something that metrics designed to gauge impact do not.

Historical perspectives helped me resolve my own quandary, but so what? Our institutions, our policies, our political choices, and our civic life have roots in the past. Understanding their origins and development over time is essential to candid engagement with contemporary public and policy questions. The ability to bring that knowledge to bear on today’s challenges, I have come to think, depends on asking our leaders and ourselves to reflect not on whether, but how historical perspectives can inform our decisions. The answers will differ by context. The process may clarify problems and priorities.

Amanda B. Moniz is the associate director of the National History Center and program coordinator at the American Historical Association. She is the author of From Empire to Humanity: The American Revolution and the Origins of Humanitarianism.